Alan Caruba
Obama will resign and for good reason

June 20, 2011
I always thought it was creepy the way Barack Hussein Obama has repeatedly referred to the likelihood of his being a one-term President. It is as if he knew, even as he campaigned in 2008, that all the loose ends and unanswered questions about his life would eventually disqualify him. 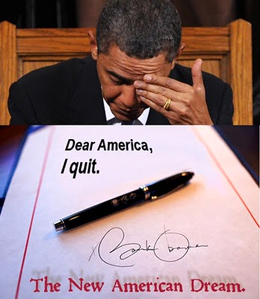 It is now widely acknowledged that the mainstream media ran interference for him, ignoring or disparaging those who questioned his eligibility. After two and a half years in office, however, his arrogance and incompetence is so manifest that even they can no longer cover for him.

Obama has single handedly generated a mass political movement called the Tea Party and election results for governors and members of Congress have put opposition candidates into office.

On March 31, 1968, then-President Lyndon B. Johnson announced that he would not run for reelection, responding to the massive opposition to the war in Vietnam. On August 9, 1974, Richard M. Nixon announced his resignation in the wake of the Watergate scandal to avoid impeachment.

I predict that Barack Hussein Obama will resign before the end of his first term. He may well do so prior to the September 2012 Democratic Party convention.

Obama was never eligible to run for the office. In his book, "Where's the Birth Certificate? The Case that Barack Obama is Not Eligible to be President," Dr. Jerome R. Corsi, Phd, devotes 387 pages, complete with appendices and endnotes, to irrefutably make that case.

Anyone who reads Article 2, Section 1, of the Constitution, however, can make that case in less than a minute. Only a "natural born" individual whose both parents were American citizens can be President. Obama's father was a citizen of Kenya. There is no dispute regarding what the Founders meant when they said "natural born." Further clouding Obama's eligibility is the time he spent in his youth in Indonesia as the adopted son of that nation's nationality.

Corsi's book explores all the other mysteries including a highly suspicious Social Security number, passports, and other documentation that any candidate for office would normally submit to public disclosure. A massive cover up that includes the national press corps, the Democratic Party, Congress and even the U.S. courts, permitted Obama to gain and hold the office.

Indeed, Corsi's book is not the first to reveal the deceptions. At least three other books have meticulously examined the issue. They include "The Manchurian President" by Aaron Klein with Brenda J. Elliot, "The Blueprint: Obama's Plan to Subvert the Constitution and Build an Imperial Presidency" by Ken Blackwell and Ken Klukowski, and "The Post-American Presidency" by Pamela Geller with Robert Spencer.

Corsi, however, has the benefit of timing. As the nation enters the period following Obama's announcement he is running for reelection and during the process of selecting a Republican opponent, the issue of his eligibility is gathering momentum.

The polling data is all against him. The failure of his policies, combined with the massive increase in the national debt, rising unemployment, the implosion of the housing market, and a growing perception of incompetence, are coalescing to give weight to the demand that he end his candidacy or resign.

"History has not been kind to U.S. Presidents that have attempted to hide behind a lie," says Corsi.

When republics begin to ignore their founding documents, they are literally committing suicide and, in Obama's case, it is an assisted suicide.

The recognized definition of a "natural born citizen," a requirement to be President, does not require much more than common sense. In a May article published by Canada Free Press, Lawrence B. Solum, the John E. Cribbett Professor of Law at the University of Illinois College of Law, is quoted as having written in September 2008, "Anyone born on American soil whose parents are citizens of the United States is a natural born citizen."

Ironically, in 2008, his political opponent, Sen. John McCain, whose both parents were Americans when he was born in the Panama Canal Zone, was the subject of a Senate Resolution confirming his eligibility to run. The then-Democrat controlled Senate took up no such action regarding Obama. If they had, they would have had to hold a convention to pick a new candidate!

Lawrence Sellin, the author of the Canada Free Press article cited above, warned "Whether through cowardice or arrogance, both Republican and Democrats fail to appreciate the fact that ordinary Americans are reaching a tipping point. Imagine a Tea Party on steroids."

There is no documentation to support the myths about his life that Obama has carefully devised. Indeed, the President has reportedly spent millions to deny public access to his birth certificate and all other records.

If he resigns, he may be able to assert the legitimacy of every piece of legislation, every executive order, signed into law, but if he is found to have been ineligible, every one of them would become null and void.

The nation can be put right again as a Constitutional Republic. Obama has led an unlawful regime. America has been drunk on socialism since the 1930s. It's time to sober up.