July 24, 2011
The most surprising thing about the current heat wave affecting much of the United States is that no global warming charlatan is claiming that it is the result of carbon dioxide (CO2) emissions. Since the late 1980s, Americans were assailed with the global warming hoax until, in November 2009, the release of emails between the trolls ginning up false "climate models" were exposed. 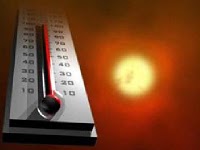 These days the term "climate change" is used as a substitute for "global warming," but fewer of us are fooled by this. Al Gore is planning a last-ditch effort in September to revive the hoax, but that will fail.

Even those in the mainstream media are too embarrassed to report the absurd notion that CO2, a trace gas in the Earth's atmosphere (0.0380%) vital to all vegetation on the planet has anything to do with climate cycles. A new cooling cycle that kicked in around 1998 is the predictable result of less solar activity.

This is not to say it's not hot. Heat waves are as common to summer months as blizzards are to winter ones. For those who possess the memory of fungus, there was a heat wave that engulfed the East Coast from July 4 through 9th in 2010. Weather records reflect that heat waves are a natural event, often following or preceding record setting cold waves.

While Al Gore and the last holdouts of the global warming hoax continue to tell us that CO2 emissions (the use of fossil fuels for energy to produce electricity, drive anywhere, and manufacture anything) will destroy the world, the world's most sophisticated particle study laboratory, CERN in Geneva, Switzerland, will soon announce a finding that will blow the CO2 nonsense to bits.

This completely overturns the torrent of lies that the UN's Intergovernmental Panel on Climate Change has been churning out for decades. The IPCC's scientists went into full panic mood as a new cooling cycle asserted itself in 1998.

While the global warming crowd has been telling everyone that they must stop burning coal, using oil or natural gas, and "reduce our carbon footprint," a recent volcanic eruption in Iceland, in just four days, negated every government-mandated effort to control or reduce CO2 emissions worldwide for the past five years! When Mt. Pinatubo erupted in 1991, it put so much smoke and other gases in the atmosphere that it cooled the Earth's temperatures for a few years until they dissipated.

Meanwhile, the Environmental Protection Agency is frantically issuing new rules and regulations to reduce the CO2 emissions from utilities and manufacturing facilities before the public realizes that its actual goal is to kill the U.S. economy by increasing the cost of electricity and everything else. It is insanely trying to shut down the mining of coal, while other elements of the Obama regime are trying to stop any drilling for oil.

Unable to scare everyone with the global warming hoax, new horrors are being invented, from ocean acidification to the claim that the atmosphere is being overloaded with nitrogen. Relax, there's four times more nitrogen in the atmosphere than oxygen and it's no big deal.

The Greens think you're stupid

Americans need to be aware that major environmental organizations such as the Sierra Club and Friends of the Earth are desperate to maintain the fictions required to deprive the U.S. of the energy it needs to function.

New York Mayor Michael Bloomberg just gave $50 million to the Sierra Club to support its "Beyond Coal" campaign. Bloomberg actually thinks it's a good thing the Sierra Club has managed to stop 150 coal-burning plants from being built. Meanwhile, during the current heat wave, providers of electricity are worrying whether they can continue to meet the increased demand for it. Coal provides 50% of all the electricity we use in America.

How stupid or evil do you have to be to stop building the plants that provide electricity at a time when the population and the demand for it is rising? Must America become a third world nation with rolling blackouts and brownouts?

Friends of the Earth are in a panic that Republicans might actually get the U.S. government to cut back on the insane spending that has put the nation on the edge of sovereign default. Lately they're claiming that Majority Leader, Eric Candor (R-VA) "is threatening to sink the American economy and undermine environmental protections so that his wealthy friends, including big oil corporations, can keep sitting on their cushions."

If you wanted to destroy America, all you have to do is make it impossible to access several century's worth of its own huge reserves of coal and the billions of barrels of oil inland and offshore that would, indeed, make America more energy independent.

So, remember, it's just a heat wave. It will end just like all the others and, in a few months, we will all be talking about the blizzards.