Alan Caruba
If not Romney, who?

November 13, 2011
Generally overlooked in the midst of the many debates and the usual competition between Republican candidates for the Party's nomination is the fact that a rather impressive number have thrown their hats in the ring. It is testimony to the health, depth, and diversity of the Party. Compare that with the Democratic Party's lone candidate, a President already ceded the title of worst ever. 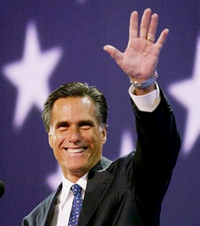 As campaigns proceed toward the on-rushing primaries, Republicans are increasingly focused beyond the usual circus atmosphere, including the latest problems encountered by Herman Cain and Rick Perry's gaffs. Selecting the GOP candidate has now reached the critical stage.

That is why a lengthy editorial in a recent Wall Street Journal is noteworthy. "Romney's Fiscal Awakening" was a thorough analysis of a November 4th Romney speech on the subject of reversing the nation's economic problems. The Journal said "his remarks deserve more attention than they've received as a guide to how he might govern."

Romney has run a smart campaign to this point, not attacking the other candidates and waiting for them to exhaust themselves while he maintained a fairly constant 25% of support to this point. Unlike the boxer who spends all his energy in the first or third round, Romney has tended to the grassroots kind of effort necessary to succeed in the early primaries.

He's been here before — losing the nomination to John McCain the last time and it is likely that many Republicans have some very serious regrets about that. He learned from that effort, probably in the same way Ronald Reagan did when he challenged Gerald Ford for the nomination. McCain was an updated version of Bob Dole, the kind of GOP candidate who gets the nod because he was judged to have earned it even if he couldn't campaign is way out of a paper bag.

Increasingly, Republicans are asking themselves, "If not Romney, who?"

While many believe that almost any GOP candidate could beat Obama that kind of optimism is unwise because an incumbent president has a lot of resources to draw on between now and Election Day. That said, Republicans have seen their own incumbents, George H.W. Bush and the aforementioned Gerald Ford defeated.

On Saturday, November 12th, Rasmussen Reports reviewed the week's polling results. "Poll after poll shows former Massachusetts Governor Mitt Romney to be the Republican presidential contender voters are most comfortable with and the GOP hopeful who continues to run most competitively with President Obama. But that's not enough for a lot of Republican voters."

"Just this past week, new surveying found that Romney is the GOP candidate viewed most favorably by all voters. This parallels other recent findings that voters see Romney as the GOP hopeful most qualified to be president and the candidate for the White House closest to the mainstream in a group that includes Obama."

I would recommend reading "Mitt Romney: An Inside Look at the Man and His Politics" by R. B. Scott (Lyons Press) because it is not an authorized biographical profile, the author has excellent journalistic credentials, and he provides useful insights regarding the Mormon Church you are not likely to read elsewhere.

I have concluded that Romney's religion is not going to play that much of a role in the forthcoming election. Consider that he won the governorship of Massachusetts, one of the most liberal states and a Democratic stronghold. Romney knows how to win elections.

In saying that, I am also saying he is a very skilled politician. In addition, he has also a proven record in the world of business and finance. These are two elements that are going to be vital to his election in 2012. Yes, I think he will get the GOP nomination. Yes, I would vote for him.

The highest hurdle Romney must overcome is his reputation as a "flip-flopper." There is no question that he has changed his views over the years on many topics, but that can be easily countered by merely listing the many times that Obama has done the same or, in his case, voted "present."

Whether it's been about abortion and choice, stem cell research, gun control, immigration, or taxes, Romney has been on one side of the issue or the other over the years. What is called "flip-flopping" can also been seen as a process of growth, of examining his positions on these issues and — yes — changing them.

Here's where Romney's religion really plays a role. The Mormon Church, in which he has been an active leader, is famous for its moral code. They don't drink. They don't smoke. And they have positions on major moral issues that are not dissimilar from the Roman Catholic Church.

As R.B. Scott says in his book, Mormons have values that include "veneration for the experience, wisdom, and caution of the elderly; respect for the talents and pragmatism of skilled tradesmen; honor and gratitude for those who perform heavy labor; deep admiration for poets, musicians, writers, entertainers, and athletes; and veneration for religious, academic, and secular achievements."

Romney has diverged from the church's positions on occasion, but Mormons also hold to a fundamental tenet, the doctrine of free agency. "Regardless of existing laws, faithful Mormons had the obligation to make moral judgments for themselves," says Scott. Romney has done that.

Romney has been the clear winner of the recent debates. Rick Perry was the biggest loser and the rest of the candidates increasingly look like window dressing.

Romney has been successful at almost everything he has ever put his hand to. He is the right man at the right time to defeat Barack Hussein Obama in 2012.