December 1, 2011
As the citizens of the United States and the seventeen member-nations of the European Union look on, a great drama regarding the future of the EU and its currency, the Euro, is occurring. 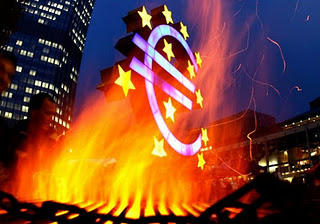 The essential problem is that both the U.S. dollar and the Euro are just so much paper, despite the promises and guarantees that they will be honored as real money. The trick has been to keep everyone believing there are sufficient real assets to back up those promises.

Since the U.S. dollar is a kind of universal currency to which other nations peg the value of their currencies the problem for everyone is that the U.S. is broke. Its debt exceeds its annual capacity to generate income, otherwise known as its Gross Domestic Product. Every hour of every day it must borrow billions to meet its obligations. Forty cents of every dollar the U.S. spends is borrowed.

There is a reason why television these days if filled with commercials offering to sell gold. Gold has always retained its value though it does fluctuate. The U.S. Treasury's gold hoard has a value of more than $400 billion these days, but that value is the flip side of the Federal Reserve's demolition of the dollar which has lost 95% of its value since1913, the same year the Fed was created.

Currently the Federal Reserve has been printing vast quantities of dollars — quantitative easing — that only serves to devalue it. The dollar is backed by the "full faith and credit" of the United States, but for the first time in our history our credit rating has been downgraded by agencies such as Standard & Poor's and Moody's.

Not that the rating agencies haven't also been part of the problem. They are famous for telling everyone that the bundled mortgage assets of Freddie Mac and Fannie Mae were okay right up to the day the 2008 financial crisis occurred and Lehman Brothers collapsed

When the 2008 financial crisis hit, the American taxpayer was tapped to bail out a number of banks, a huge insurance company, and even General Motors. This was followed by "stimulus" spending, all of which drove U.S. debt levels to historic highs. The vast matrix of Federal Reserve central banks, government agencies charged with oversight of financial institutions, and the ratings agencies all contributed to the crisis.

The U.S. went off the gold standard in 1931, in effect exporting deflation around the world. Other nations followed suit. At the time, Americans were experiencing high debt burdens, unemployment, and money hoarding. If that also sounds like 2011, you're right.

The crisis of 2008 was brought about by the "bundling" of mortgage assets. Fannie Mae and Freddie Mac, two Depression-era social justice inventions, currently own 50% of mortgages, many of which were the result of pressures on banks to make loans to people who clearly could not pay them back. What the banks considered "assets" were phantoms whose collateral could often not be traced. 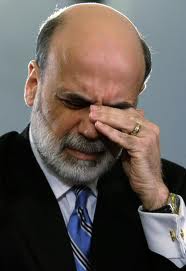 Ben Bernanke, Fed Chair
Little noted is the role of the Federal Reserve. A government investigation into the causes of the 2008 financial crisis concluded that "The prime example is the Federal Reserve's pivotal failure to stem the flow of toxic mortgages which it could have done by setting prudent mortgage-lending standards. The Federal Reserve was the one entity empowered to do so and it did not..."

What the Fed had done, in fact, was to lower the interest rate it charged for lending to banks to very nearly zero.

In his book, "Currency Wars: The Making of the Next Global Crisis," author James Rickards explains what is actually occurring.

We've been here before in two previous currency wars, the latter of which led to World War II. The problem then and now is the need for job creation, something that can only be achieved by private enterprise.

The United States government has not provided a good environment for its business and industrial community to invest and expand. It has, as just one example, very nearly the highest corporate tax in the world; beyond that, a vast matrix of regulations makes doing business in America expensive, difficult, and often uncompetitive.

How this will all play out depends in large part on whether Americans are prepared to reduce the size of a government that grew precipitously in the 1930s and the second half of the last century. We must begin to slowly and fairly phase out the "entitlement" programs.

The great question facing Europe is whether the EU disbands and its members return to individual national sovereignty in a response to a continent-wide economic disruption caused by unsustainable debt in its southern tier nations. The EU was a response to a history that generated two major wars in the last century, bankrupting the continent morally, socially, and economically. The road back has been in part due to U.S. aid and protection against the former Soviet threat.

While the possibility of abandoning the Euro was unthinkable bare months ago, it is now an option; a very difficult option because of the vast interconnectiveness of Europe's and our own banks.

In America the only real hope we have is that in November 2012 we will elect men and women who will turn the ship of state around before the latest currency war sinks ours and the world's economies.