December 23, 2011
For generations of Americans, the most famous kiss between a Navy sailor and a nurse occurred during the celebration of V-J Day in New York's Times Square on August 14, 1945. 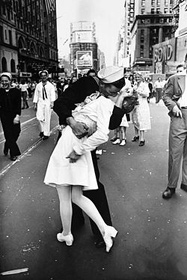 The photo by Alfred Eisenstaedt was published in Life magazine a week later. It said everything you needed to know about the joy with which the nation responded to the end of World War Two and everything about the shared values of the nation.

So, when a photo of a homecoming kiss between Petty Officer 2nd Class Marissa Gaeta kissing her "partner," Petty Officer 3rd Class Citlalic Snell went public on December 22, it set gay and lesbian hearts atwitter. What the predominantly heterosexual population thought of it was unreported.

According to news reports, "Navy officials said it was the first time a same-sex couple was chosen to have the first kiss. The first-kiss is a Navy tradition for ships returning to port. David Bauer, the commanding officer of the Oak Hill, said the crew's reaction was positive" and he informed the Associated Press "It's going to happen and the crew's going to enjoy it."

But why? The answer is the way the U.S. military has been used by gay and lesbian advocacy groups as a petri dish to force social change. The other location for influencing such change is in our nation's schools and manifests itself in charges of massive bullying and questionable sex education curriculums, many of which evoke outrage among today's parents.

When then-candidate Barack Obama promised transformational change in America, it is doubtful that those who voted for him realized that part of that change was his advocacy of gay rights. In June, at a fund-raiser in New York composed of gay, lesbian, and transsexual supporters, Obama touted his efforts to advance gay rights and promised further progress. He stopped short of declaring support for legalizing same-sex marriage.

Earlier, however, in February the Obama administration said it would no longer oppose legal challenges to the Defense of Marriage Act (DOMA), just two months after Congress and the President agreed to repeal "Don't Ask, Don't Tell," the military's ban on openly gay service members. Attorney General Eric Holder sent a letter to Congress saying that DOMA, passed in 1996, "discriminated" against gays.

Let that sink in. The Obama administration thinks that the defense of traditional marriage between a man and a woman is "discrimination." Since the dawn of civilization, the union between a man and a woman has been the keystone of societies everywhere. Even the extension of "civil unions" with expanded rights for gay couples has not been enough for advocates of homosexuality. 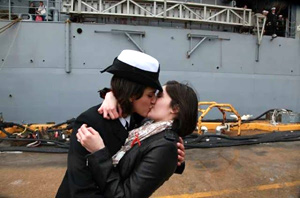 Those with short memories may not recall that it was another Democrat President, Bill Clinton, who created an uproar within days of taking office when he let it be known in 1993 that he intended to repeal the ban on homosexuals serving in the U.S. military. At the time, a Pentagon study concluded that "homosexuality is incompatible with military service." The study, however, also proposed a policy that came to be known as "Don't Ask, Don't Tell" preventing recruiters from screening or discouraging homosexuals from joining.

There were and are still good reasons for the military's opposition to homosexuals serving. Let it be said that homosexuals have probably always served. When I was in the Army in the 1960s, I and others in my unit knew of gays serving along side us, but practiced a tolerance we took for granted by neither acknowledging it, nor engaging in any action based on it.

At the time, there was no such thing as "gay rights" and, were it not for the incessant demands for them, they would not exist today. Gays and lesbians play on the inherent sense of fairness and tolerance that is a hallmark of American society. The result is that homosexuality is now widely represented in popular culture to the point of being accepted as "normal." It is not "normal." It is a sexual aberration involving a very small portion of the overall population, perhaps no more than four percent. Always was, always will be.

The U.S. military is a unique element of our society. The 1993 Don't Ask, Don't Tell law stated that "there is no constitutional right to serve" and pointed out that the military is a "specialized society" that is "fundamentally different from civilian life." This was and is so self-evident that the present state of affairs is nothing less than astonishing. Homosexuality was deemed an "unacceptable risk" to good order, discipline, morale and unit cohesion — qualities essential for combat readiness.

Suffice to say Don't Ask, Don't Tell opened a Pandora's box of difficulties for all the ranks. Its repeal has not made those difficulties magically disappear.

The photo of two Navy lesbians kissing represents the "progress" that a vocal minority has made, given the support of liberal politicians on both sides of the aisle working against the tide of resistance of majority Americans who are fighting the social implications of "gay rights," the demands for "gay marriage," and the influence over young minds passing through government school systems.

It says something about life in America today, one that is very different from America at the end of World War Two.