February 8, 2012
As someone who vividly recalls the Iranian "students" who took our diplomats hostage in 1979 and the 444 days it took to get them back, the repeat of this by the Muslim Brotherhood in Cairo, putting 19 pro-democracy, non-government organization (NGO) Americans on trial on trumped up charges has an ugly repetitive feel to it. 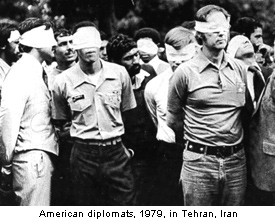 The contempt the Iranian revolutionaries, led by Ayatollah Khomeini, had for America and, I might add, international law and practice that goes back centuries, is everything you need to know about dealing with militant Islamists, whether they are in Iran, Egypt, or anywhere else on the face of the Earth.

Just as then-President Jimmy Carter dawdled while looking for a diplomatic response, this same scenario is now being played out by Barack Obama and it won't work now just as it did not work then. Carter authorized a failed military operation that, by most accounts, was poorly organized and executed.

Just as Jimmy Carter was seen as weak, so too is Barack Obama and, for America and the world, that is very bad news. I don't care if the Iranian leadership and other militant Islamists don't like America. I want them to fear us.

Apparently they didn't get the message when the U.S. killed Obama bin Laden in Abbottabad, Pakistan, the home city to its military college. While bin Laden was right up the street and around the corner, we are supposed to believe that no one in Pakistan's military or intelligence structure had the slightest idea. He was living in a large walled compound. Short of buying his own groceries, you'd think someone might have noticed. And, of course, now they are angry at us for killing the man behind the murder of some 3,000 of our citizens, including an attack on the Pentagon!

When the Iranians went into the streets in June 2009 protesting the bogus election of Mamoud Ahmadinejad, Obama's response was that the U.S. "shouldn't meddle" in Iran's affairs. A plot to assassinate the Saudi Ambassador to America in a Washington, D.C. restaurant was discovered and some people might call that "meddling" in our affairs.

This hostage-taking needs boots-on-the-ground action now. The only upside to this event is that the longer it goes on, the same disenchantment that resulted in the defeat of Jimmy Carter will be Obama's fate in the November election.

The fact that Obama has imposed the largest debt/credit crisis that the nation has ever incurred, unemployment levels that rival the Great Depression, a housing market that is still in the tank, and is busy hollowing out the nation's military capabilities at the worst possible time seems to gone unnoticed by the forty percent or more of Americans that think he's doing a swell job.

Our present problem is that Obama does not like America any better than our enemies do. He does not like our Constitution, recently blaming the Founding Fathers for the limitations they wisely imposed to avoid a government grown too large and a president with powers beyond those granted.

This nation is in peril from the same gross stupidity that gripped it prior to World War Two until Pearl Harbor occurred in 1941. The war in Europe had been going on since 1939 and the Japanese had invaded China in 1937.

We are in a new, dangerous era with the chaotic situations in the Maghreb of northern Africa where U.S. assistance, via NATO, was provided to overthrow Gaddafi and Obama's swift rejection of Egypt's Mubarack led to his downfall. There are uprisings in Syria and Yemen. It is the result of massive resentment against dictatorial regimes, but the real problem will be how these revolutions turn out.

That is something we cannot control, but we must do what we can to protect American citizens abroad to protect our national interest and to project real national power.

The Middle East is tribal. With the exception of Israel the "nations" we must deal with are merely armies with a national flag, not modern democratic governments responsive to their citizens. That is why Iraq threatens to break apart. It is why the majority Syrians want to end the minority Alawite tribe's control. It is why Palestinians are not welcome anywhere.

The President's top intelligence advisor recently told a Senate committee that sanctions are not working against Iran, but the President wants to pretend they are. The U.S. and the rest of the world are waiting for the Israelis to do to Iran what we and our allies should be doing to end its nuclear threat.

Likewise, if we wait around while the Muslim Brotherhood in Cairo makes us look like a bunch of punks it will just get worse for us in Egypt and the Middle East just as it did in 1979.

In Egypt we need to get in, break some furniture, shoot some bad guys, get our people out, and then shut off the billion-plus dollar aid spigot.