February 22, 2012
On February 16, I published "Anatomy of a Global Warming Hoax" concerning the theft of the private records of The Heartland Institute's board meeting and the creation of an alleged forged document intended to harm its reputation as a long time advocate of the real, not fake, science that has been the basis of the global warming — now called "climate change" — hoax. 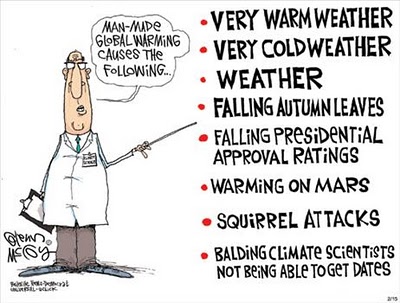 The Feb 21 issue of The Wall Street Journal published an editorial, "The Not-So-Vast Conspiracy" noting that "As for 'the largest international science conference of skeptics' Heartland will, according to the documents, spend all of $380,000 this year on the Nongovernmental International Panel on Climate Change. That's against the $6.5 million that the UN Intergovernmental Panel on Climate Change (IPCC) costs Western taxpayers annually, and the $2.6 billion the White House wants to spend next year on research into 'global changes that have resulted primarily from global over-dependence on fossil fuels.'" (Emphasis added)

The global warming hoax has cost taxpayers billions since it was initiated and earned the purveyors of "carbon credits" millions as industry and others paid for the privilege of emitting "greenhouse gas" — primarily carbon dioxide — as part of doing business. Currently the European Union is trying to shake down the airline industry by charging them a surtax on their emissions as they fly tourists and businessmen to that beknighted continent. Most of the exchanges that sold the credits have since closed.

The infamous "Cap-and-Trade" legislation that thankfully died in Congress was part of this scam.

We now know that the document theft was either perpetrated or abetted by Dr. Peter E. Gleick, a water and climate analyst, and founder of the Pacific Institute. A contributor to Huffington Post and prolific castigator of global warming "skeptics" and "deniers," Dr. Gleick has admitted his part in the effort to depict The Heartland Institute, its board and its donors as part of the worldwide conspiracy to debunk the hoax.

Since 2008 Heartland has sponsored six conferences that brought together scientists and others who presented ample evidence of the absurdity that carbon dioxide and other "greenhouse gases" was causing the Earth to heat up. Unfortunately for the real IPCC conspirators, the Earth entered a natural cooling cycle in 1998 and, in 2009, thousands of email exchanges between the IPCC scientists were posted to the Internet revealing their growing panic over the failure of Mother Nature to cooperate with their lies, most if not all of which were based on bogus computer models.

Even The New York Times that had trumpeted the false allegations based on the purloined documents, published a Feb. 20 article, "Activist Says He Lied to Obtain Climate Papers" reporting that "Dr. Gleick distributed the documents to several well-known bloggers and activists who support the work of mainstream climate scientists and who have documented the Heartland Institute as a center of climate change denial."

The Times is incapable to not slandering organizations and individuals who have fought long and hard to rip the mask of respectability from the perpetrators of the hoax. The "mainstream scientists" to whom it refers are, of course, the IPCC scientists behind the hoax. "Climate change denial" is nothing less than the propagation of the truth about the hoax.

For me, the most interesting aspect of all this has been the way The Heartland Institute has responded to Dr. Glieck's chicanery. From the moment that documents, real, altered and fake, were posted on sites like DeSmogBlog.com and others, Heartland's president, Joe Bast, went after the then-unknown identity of the person who secured the documents threatening legal action.

When Dr. Glieck publicly admitted his part in a Huffington Post statement, Bast released a statement saying, "Gleick's crime was a serious one. The documents he admits stealing contained personal information about Heartland's staff members, donors, and allies, the release of which has violated their privacy and endangered their personal safety."

The key word in Bast's statement is "crime." As John Sullivan, a British-based attorney and an active "denier," author and blogger, noted, Bast said "A mere apology is not enough to undo the damage," adding that Dr. Gleick faces being financially ruined by a civil prosecution and "is also liable to a criminal investigation as such falsification of documents is a well-known brand of white collar crime."

Some time ago I wrote a commentary saying that some of the global warming conspirators needed to go to jail for their crimes. As events unfold, that yet may occur insofar as they were the recipients of public funding and United Nations support as the IPCC published their false "science" amidst alarmist global warming claims.

Perhaps their greatest crime was the debasement of meteorological and climate science. Beyond that, their attacks on the reputation of the brave scientists who stepped forward to refute them is the very definition of slander and liable. The New York Times, Newsweek, Time, the National Geographic, and other "mainstream" news publications will unfortunately be given a pass for advancing their lies even to this day.

The Heartland director's meeting was devoted to a program to deal with the torrent of false teaching in our nation's schools intended to warp the perceptions and knowledge of students regarding global warming. That, too, is part of the crime committed against a national and worldwide population that was deliberately misled.

The warmists are in retreat and for that everyone owes a great debt of gratitude to The Heartland Institute and all the others who joined in the effort to refute the greatest hoax of the modern era.