Alan Caruba
How (and why) Obama has impeded recovery

April 8, 2012
During and after his 2008 campaign, Barack Obama was hailed as the second coming of Franklin D. Roosevelt. History records that Roosevelt presided over the Great Depression, begun in the previous administration of Herbert Hoover who got most of the blame. Roosevelt's policies extended it well beyond the normal recovery from a recession. 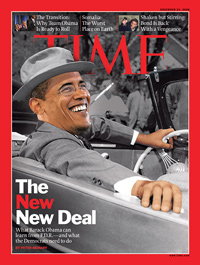 In his book, "Dupes," historian Paul Kengor, wrote "Roosevelt won in a landslide in November 1932. To liberals and traditional Democrats everywhere, he was more than just a new face at 1600 Pennsylvania Avenue. He was a kind of political savior at the most desperate time in their lives."

Roosevelt was immediately assailed by the Communist Party USA as he launched his New Deal stew of programs intended to reverse the effects of the economic crisis. As Kengor notes, "No president had ever moved so far to the left, and so quickly, but it was not enough for the comrades." They portrayed Roosevelt "as a warmonger bent on wreaking havoc on the poor USSR (Soviet Russia)" because they feared the U.S. might go to war against it.

As we now know, some of Roosevelt's closest advisors were either Communists or extremely sympathetic to Communism. Harry Hopkins was one of them and was later exposed as a likely Soviet agent. The Venona transcripts of secret communications between U.S. Communists and their Soviet handlers revealed this.

Obama came into office following the 2008 financial crisis which, as we know, he blamed entirely on George W. Bush. Triggered by Fannie Mae and Freddie Mac, two government sponsored enterprises, the crisis reflected the many "subprime" mortgages they had pressured banks to make. Bush's efforts to rein them had fallen on deaf ears.

Like Roosevelt, Obama initiated a number of policies and legislation, not the least of which was his "stimulus" package to turn around the economy, but which has left it with a higher level of unemployment today than in 2009-10. His other initiative, stimulating Green energy has cost taxpayers billions.

In "New Deal or Raw Deal?" historian Burton Folsom, Jr., wrote of Roosevelt's National Industrial Recovery Act (NRA) documenting that it and other measures did nothing more than balloon the federal government while interfering with the normal action of capitalism to recover — as it had many times before — from financial crises.

Oklahoma Senator Thomas Gore, first elected in 1907, summed up Roosevelt's efforts saying at the time, "No depression can be ended by gifts, gratuities, doles, and alms handed out by the Federal Treasury, and extorted from taxpayers that are bleeding from every pore."

As Folsom put it, "Capitalism had failed in Roosevelt's view of the world and that opened the door for new experiments in government ownership and government direction of the economy. Private enterprise would become public enterprise."

Why anyone would think that Barack Obama, a "red diaper baby," raised by leftists and mentored in his youth by a card-carrying Communist, Frank Marshall Davis, would act any differently than Roosevelt, repeating all his mistakes, is to be ignorant of history.

The Worst Recovery Ever

Writing in the April 3rd Wall Street Journal, Edward P. Lazear, 2006-2009 chairman of the President's Council of Economic Advisors, wrote about "The Worst Economic Recovery in History." Assessing Obama's policies, Lazear said that "our current recovery pales in comparison with most other recoveries, including the one following the Great Depression."

"The Great Depression started with major economic contractions in 1930, '31, '32 and '33. In the three following years, the economy rebounded with growth rates of 11%, 9%, and 13% respectively...According to the National Bureau of Economic Research, the recovery began in the second half of 2009. Since that time, the economy has grown at 2.4%, below our long-term trend by either measure. At this point, the economy is 12% smaller than it would have been had we stayed on trend growth since 2007."

"It would be difficult to argue," wrote Lazear, "that government policies over the past three years have enhanced confidence in the U.S. business environment. Threats of higher taxes, the constantly increasing regulatory burden, the failure to pursue an aggressive trade policy that will open U.S. exports and the enormous increase in government spending all are growth impediments."

Like Roosevelt, Obama has impeded a rebound in the growth of the economy and he has done it by applying all the wrong Socialist "solutions" that extended the Great Depression from 1929 to 1941.

For Obama, this has truly been a crisis that would not be allowed to go to waste. What he has done has been to impose Obamacare in the face of massive rejection, overseen the loss of two million jobs, and increased the national debt to levels that put the U.S. on a crash course to financial collapse.

It would be naïve to think he did not know what he was doing. If one wanted to bring the United States of America to its knees, he would pursue Obama's policies of the past four years. His "open mike" gaff, speaking with Russia's President, Dmitry Medvedev, confirms his intent to work closely with America's longtime adversary if reelected.