April 19, 2012
I came of age in the 1950s during a period when Joe McCarthy was raising hell about communists in the federal government. He was spectacularly inept, often made intemperate and inaccurate charges, but for the most part he was right. He managed to alienate his fellow Republicans and earn a slap-down from then President Eisenhower. By around 1953 his fifteen minutes of fame were up. His bombastic personality undermined the seriousness of the issue. 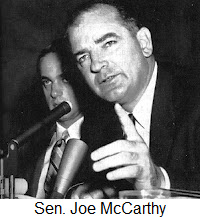 McCarthy was all bluster, but the publication of "The Venona Papers: Exposing Soviet Espionage and America's Traitors" in 2001 revealed that his charges of widespread infiltration of the State Department and even the White House during the Roosevelt and Truman years were true. Venona was the U.S. code name given secret Soviet spy communications that had been recorded during and after World War II. In 1995, the National Security Agency began releasing the documents.

In 2000 Reed Irvine and Cliff Kincaid of Accuracy in Media wrote about a conference, "Rethinking McCarthy" devoted to the myths surrounding McCarthy that were disputed by journalist M. Stanton Evans, a director of the National Journalism Center. Chief among them was that McCarthy never named any names of suspected communists in government, but Evans revealed a file of material showing that he had. The other myth was that those named had been cleared by congressional committees or were just mildly leftist. They were not.

It is not surprising that Rep. Allan West who recently said that there are some eighty communists in Congress today, members of the Congressional Progressive Caucus, drew the same response that McCarthy did in his era. Rep. West characterized the response as "A lot of buzz and inaccurate reporting." Politico.com called him a McCarthyite. 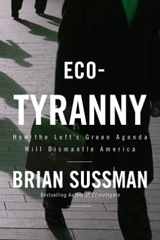 In the run-up to Earth Day on April 22nd — the birthday of Vladimir Lenin, the Soviet Union's first dictator — Brian Sussman, author of the bestselling "Climategate," has a new book, "Eco-Tyranny: How the Left's Green Agenda Will Dismantle America" ($25.95, WND Books). If you read no other book about the relationship between environmentalism and communism this year, you must read this one.

Sussman has brought together all the relevant facts. "Karl Marx founded a philosophy that inspires dictators and demagogues," writes Sussman. "Commencing with the Russian Revolution in 1917 to the present, Marx's tyrannical ideology has been responsible for the documented deaths of more than 110 million individuals around the world."

"Pollution," writes Sussman, "never has been Earth's most troubling foe — Marxism had. And Marxists have always seized upon pollution, both real and imagined, as an effective weapon in their unrelenting war on freedom."

Americans are the victims of blunders by a succession of presidents, but it was Richard Nixon who kicked off the plundering of the nation by the environmental movement when, in 1970, he quietly signed into law the National Environmental Policy Act, followed by the Clean Air Act. "Nixon's Clean Air Act expanded the '67 law to autocratically allow the federal government to limit both industrial and mobile sources of air pollution. It set up the Environmental Protection Agency (EPA).

Today, the EPA has become a rogue agency, barely controlled by Congress. "Today the EPA is eighteen thousand full-time employees strong, with an annual budget of $10 billion," notes Sussman.

"From a legal perspective," writes Sussman, "what Nixon did in signing the Clean Air Act was flatly unconstitutional. Article I, Section 8 of the Constitution limits the power of the federal government to the basics, none of which includes regulating the atmosphere." The EPA engages in the most bogus scientific "research" seen since the days of the Soviet Union

The locus of the environmental movement is the United Nations whose Intergovernmental Panel on Climatic Change (IPCC) has been issuing reports that were used to support the global warming hoax and, when it was exposed as a massive fraud, has since changed its message to "sustainability" whose purpose remains the establishment of a global government run out of the UN. It advances every element of the communist movement in its attack on capitalism and the foundation of the freedom enshrined in the U.S. Constitution.

We have seen the systematic dismantling of the U.S. Constitution and our economy by our elected representatives, the latest being Obamacare's effort to takeover one sixth of the nation's economy while twisting the Commerce Clause to impose a mandate on everyone to purchase health insurance whether they want or need it.

Sussman's book provides a time-line for the eco-tyranny at work in the nation today. The threat to our freedom and to the position of America as the protector of freedom worldwide is real.

Think about that when you find yourself drowning in the propaganda that will surround and augment the message of Earth Day and the forthcoming UN conference, Rio+20.