Alan Caruba
The world as a giant playpen

May 28, 2012
Having spent most of my life in the last century and the rest in the new one, it affords me the opportunity to look back at the blunders, the slaughters, and the triumphs of a considerable period of time. 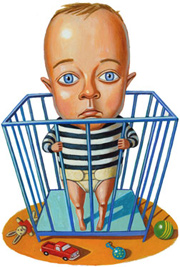 I often wonder why people like scary movies when all they have to do is read the daily newspaper or tune into the news on radio and television — what little there is of it after the mainstream media gets through ignoring what it deems insignificant or contrary to their beliefs.

Huge challenges to the U.S. Constitution should be the big news of the day, but the MSM reduce them to chatter about an Obamacare utopia in which everyone receives medical care for virtually nothing — paid for with high taxes by 'other' people — or that the right to be free of governmental assaults on your personal religious beliefs is really about the right to have unprotected sex.

This past week we were treated to a President who seems to think he can tell any lie, even one as grossly out of synch with a reality Americans see around themselves every day, and people will believe it. Even the White House press corps has been roused from their torpor to dispute the latest whopper.

Some moron, writing for MarketWatch, absurdly said "There has been no huge increase in spending under the current President, despite what you hear." This is akin to "who do you believe? Me or your lying eyes?"

Suffice to say, Obama added $4 trillion to the national debt in just three year's time. Not since the end of World War Two has the U.S. spent more than 23.5% of its Gross Domestic Product. Obama has exceeded that every year he's been in office. The national debt exceeds the total annual GDP.

For really childlike idiocy though, one need only cast their eyes in the direction of Europe. Despite the glaring example of the collapse of the Soviet Union, the Europeans cling to their belief that a socialist economy is the answer to what Wall Street Journal columnist, Bret Stephens, described as the "economic stagnation, policy paralysis, and national bankruptcy on the continental scale we are witnessing today."

There is hope for America. According to the most recent Rasmussen polls, fully 64% of likely U.S. voters "prefer a government with fewer services and lower taxes" over the European model of more services and higher taxes.

Despite the financial chaos occurring within the European Union, voters in France and Germany are shunning "austerity" in favor of candidates from the Left. Need it be said that President Obama is pumping for more stimulus spending? Need it be said you cannot spend your way out of debt?

What is the result of all this "party now — pay later" fun and frolic? People who have to grapple with reality are making the kinds of decisions that are resulting in a global economic slowdown. Those who purchase things like computers, machinery, and aircraft — long lasting goods — are reducing their spending. Even the hard-charging Chinese, the world's second largest economy, have gone through seven decreases in their manufacturing index.

A lot of what is occurring is normal and sensible caution being exercised as nations watch to see if the EU can solve its financial crisis. A lot of it stems from the 2008 U.S. financial crisis and the last four years in which the economy has barely budged in terms of any growth.

If the general public loses confidence in its banking system, the economy will truly falter. As it is, polling suggests that many Americans believe the government will default on its obligations, the bulk of which are based on European-style "entitlement" programs, Social Security and Medicare. Neither is sustainable in their present form.

From the U.S. to Europe, Asia to South America, the global economic outlook has not been this bad since the days of the Great Depression which was also a global phenomenon.

It is as if we are all living in a giant playpen and the problem is that too many nations — including our own — have too many people who prefer to remain infants, taken care of from birth to death.

It's called Communism or Socialism and it has never worked, not in the last century, nor in this one.