Alan Caruba
Only if the wind is blowing

June 11, 2012
I'll bet you didn't know that June 15th is Global Wind Day. Wind is part of the Earth's atmosphere and, depending on whether it is blowing gently or strongly, there isn't a darn thing anyone can do about it. Except for measuring its velocity and direction, wind like clouds remains largely a mystery to meteorologists. 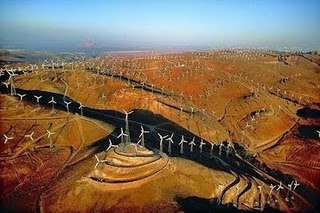 Not so for the United Nations Intergovernmental Panel on Climate Control, the people who brought you the global warming hoax, asserting that carbon dioxide, a gas on which all vegetation depends, was raising the global temperature — largely as the result of burning coal and oil as sources of energy.

The Earth, however, has been in a natural cooling cycle since 1998 and the advocates of "green energy" have been in a tailspin, a death spiral of an inadequate capacity to deliver electricity and the inability to compete with more reliable, affordable, and traditional energy sources.

Simply put, wind and solar energy is a fool's dream and one that must be backed up by traditional energy sources at all times in the event the wind isn't blowing or during the nighttime or if clouds obscure the sun, causing solar energy to cease producing electricity. Only an idiot would want to be dependent on wind or solar to provide a reliable source of electricity.

The Renewable Energy Industrial Index (RENIXX) tracks the stock value of wind and solar companies. In May — though you did not read about it in the mainstream media — it announced that thirty of the largest renewable energy companies were trading at "an all- time low" and the index "had lost over 90% of its value since 2008."

The Sierra Club (along with a rogue's gallery of environmental organizations) wages war on all forms of energy production and use. They urged me to join others "at a beach near you for a kite-flying rally and celebration of New Jersey's offshore wind potential." Not only does it oppose the use of America's vast reserves of coal, but it also has a "Beyond Natural Gas" program as well; another huge source of power for the nation.

I won't bore you with the list of RENIXX companies that have filed bankruptcy, but they include the ill-famed Solyndra, Beacon Power, Ener1, and others in which the Obama administration has "invested" and lost billions in taxpayer funds that could have been devoted to highway and bridge repair or restoring our ailing military power. Another fourteen companies were listed as "teetering on the brink" of bankruptcy.

In May 2011, New Jersey Governor Chris Christie pulled the state from membership in the Regional Greenhouse Gas Initiative (RGGI), the only mandatory cap-and-trade program in the U.S. The RGGI would have required New Jersey to reduce greenhouse gas emissions (the vital carbon dioxide plants need). Maine and New Hampshire had previously bowed out of the former ten-state coalition that would have reduced their capacity to provide electrical power. In doing so, Governor Christie diverted $65 million from RGGI and helped balance the state budget.

It is worth mentioning that New Jersey derives 50% of its electrical power from nuclear facilities. For reasons beyond my understanding, Governor Christie signed off on a project to build a grid of a wind farm of 96 turbines 16 to 20 miles off our shoreline. If the permitting process can be stopped, New Jersey's shoreline will not be saddled with this awful project and the miles of cable it will require to deliver the few megawatts its "potential" promises.

Europe which led the charge to build wind and solar power projects as the result of its obsession with carbon dioxide emissions has since discovered that neither can compete with fossil fuel and nuclear power. France is the exception, getting most of its power from nuclear facilities. In England, its citizens are increasingly suffering from "fuel poverty" as the cost of electricity continues to soar thanks to its reliance on wind and solar projects.

Not only is the European continent suffering a financial crisis thanks to the failure of the European Union's effort to get 27 sovereign, member nations to act in concert with one another, it is facing a shortage of energy to maintain its industrial base and service the needs of its population.

So, on Global Wind Day, feel free to go to the beach, but remember that it is an extraordinary bad way to generate energy.

It will no doubt be on the agenda for the forthcoming June Rio+20 Earth Summit that is self-described as "the 'institutional framework for sustainable development'; a system of global governance" aimed at achieving the United Nations Intergovernmental Panel's plan to control the world's "social, environmental, and economic" policies.

And you thought wind and solar power was just about electricity.