July 15, 2012
I don't know about you, but I am sick of all the Democratic mud-slinging at Mitt Romney because he is rich. The level of hypocrisy tells me that Obama and his trolls are so bereft of anything to offer the voters that they insult them with this class warfare garbage about "millionaires and billionaires." 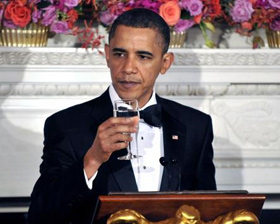 President Obama, according to a May 15, 2012 USA Today news article, "is a wealthy man with assets of as much as $10 million. Moreover, "he has a hefty stake in JP Morgan Chase, the megabank...with an account worth between 500,000 and $1 million."

Romney is rich. If he is elected, the Forbes list of the ten richest U.S. Presidents noted that in 2010 he reported adjusted gross income of $22 million of which $8 million was interest and dividends." The January 24, 2012 Forbes article by William P. Barrett said that "implies assets in the range of $200 million to $250 million."

Romney, however, "would not be tops in presidential wealth. At the top of the list, in adjusted terms, George Washington was one of the wealthiest men in the nation when he became president. Mount Vernon plantation grew to 6,500 acres and Washington was a canny businessman, distilling booze, and even raising mules.

In 2010 dollars, Democrats who held the presidency in the last century included John F. Kennedy whose net worth was $1 billion. Jacqueline Kennedy was an oil heiress and his father was one of the wealthiest men in America. Almost all of JFK's wealth income and property came from a trust shared with other family members.

Clinton's wealth is estimated at $38 million. Twenty years of public service did not make him a rich man, but since leaving office, books and speaking fees earned him big bucks.

Franklin Delano Roosevelt was worth $60 million, mostly acquired through inheritance and marriage. He spent most of his adult life in public service and his mother controlled the purse strings.

Lyndon Baines Johnson made a lot of money as a politician. He would accumulate 1,500 acres in Blanco County, Texas, and he and his wife owned a radio and television station in Austin. His net worth was estimated at $98 million.

In 2011, you couldn't swing a dead cat in Congress without hitting a multi-millionaire, many of them Democrats. John Kerry who ran against George Bush has a net worth of $193.07 million, much of it the result of marrying rich wives. Jay Rockefeller whose very name suggests wealth has $81.63 million. The California ladies, Diane Feinstein comes in at $55.07 million and Nancy Pelosi is worth $35.20 million.

Among the Republicans, Rep. Michael McCaul has assets of $294.21 million, much of it is held by his wife, Linda McCaul, the daughter of Clear Channel Communications CEO and founder, Lowry Mays. Rep. Darrell Issa, who earned his wealth in the private sector, is worth $220.40, and, from a celebrated New Jersey family, Rep. Rodney Frelinghuysen is worth $20.35 million. Neither of the Bush's, father and son, made it into the top, most wealthy Presidents.

Suffice to say if you weren't already wealthy when you got elected to Congress, the odds are you will accumulate wealth while there.

Obama's salary as President is $400,000 a year; he has a $150,000 expense account and a $100,000 tax-free travel account, along with a $20,000 entertainment budget. Not big money compared to the CEOs of major corporations and banking institutions, but the taxpayers pick up the tab for a lot of extras that go with the job.

If the economy will decide Obama's fate in November, then a lot of voters, Republicans, Democrats, and independents are going to be thinking about the past 40-plus months of 8.2% unemployment, billions wasted on "clean energy" companies that have gone bankrupt sticking taxpayers with the losses, the national debt of $17 trillion that robs the future from the next generation and the one after that, and the largest tax increase in history — $494 billion in one year — that will hit on January 1, 2013. I don't even want to think of the costs of Obamacare.

Caterwauling about how wealthy Mitt Romney is and telling lies about his career at Bain Capital may fool some people, but most know where their financial problems came from and have no doubt it has been Barack Hussein Obama's appalling mismanagement of the nation's economy.

Being rich in America never kept anyone from being elected President. Obama and many of his Democratic Party colleagues are the wealthiest hypocrites in public office.