July 23, 2012
The Diagnostic and Statistical Manual of Mental Disorders describes narcissism as a personality disorder that "revolves around a pattern of grandiosity, need for admiration, and sense of entitlement." 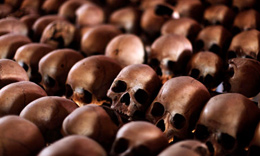 We all need a bit of narcissism that maintains our self-esteem and a positive outlook on life. Performing artists and sports figures, for example, need it to exert themselves to achieve in their fields of endeavor. Political figures, of course, also need a bit to advance and defend their point of view. It plays a role in providing leadership.

The problem is that it is often difficult to spot narcissism when it becomes a pathological disorder. In the case of the cult that Jim Jones fostered, it ended with the suicide of some nine hundred of his followers who gave a poisoned drink to their children and then took it themselves. History is filled with examples of men whose disorder led to the deaths of countless people to satisfy their delusions about themselves.

Some of the criteria of a narcissistic personality include:

3. Is firmly convinced he or she is unique and can only be understood by other high-status people.

5. Feels entitled and demands automatic and full compliance with their expectations.

6. Uses others to achieve his or her own ends.

7. Is devoid of empathy and is unable to identify with or acknowledge the feelings and needs of others.

8. Is constantly envious of others; believes they feel that way about him.

9. Is arrogant, has haughty behaviors or attitudes coupled with rage when frustrated, contradicted, or confronted.

This description is taken from the American Psychiatric Association (1994) manual cited above. It is based as well on the writings of Dr, Sam Vaknin, an authority on narcissism and author of "Malignant Self-Love." A key point Dr. Vaknin makes is that the narcissist is NOT self-aware; he lies to others and to himself, and he is "master of disguise."

At this point, you are probably thinking that I am describing Barack Hussein Obama, but in fact I am quoting from Ali Sina's book, "Understanding Muhammad and Muslims." Sina is one of the world's leading authorities on both and through his writings and website at http://www.faithfreedom.org/, has made it his mission to encourage Muslims to understand how Islam warps their normal human values of love, tolerance, and life itself.

It is bad enough to contemplate the damage President Obama has done in just under four years as President, but I believe that the world is on the edge of an Islamic Armageddon because the fundamental teachings of Islam permit otherwise sane people to do insane things.

It was insane to fly passenger jets into the Twin Towers on September 11, 2001 to kill nearly three thousand people to advance the global domination of Islam. Before and since, the West and elsewhere around the world, there has been a non-stop succession of terrorist acts for this purpose. On an individual basis there have been hundreds of thousands of acts of murder and terror carried out by Muslims.

Sina writes, "Islam advanced with terror. Muslims are convinced that terror and deception will eventually make them victorious. They have an example in their prophet. His successes are their inspiration. They will not relent unless they are crushed."

"The Islamic world is sick," says Sina. "It would be shortsighted to deny that the cause of this sickness is Islam. Almost every crime, every abuse and inhumanity perpetrated by Muslims is inspired by the examples set by Muhammad and justified through his words and deeds."

The great genocides of the past and as recently as World War Two's Holocaust that killed six to seven million European Jews and a comparable number of others were carried out by the pathological narcissist Hitler, whose acts were rivaled by Stalin, and Mao Tse Tung.

As world leaders seek reasons to hope that the Iranians will cease their quest of nuclear weapons, the ayatollahs have in mind a worldwide; cataclysmic genocide in order to bring about the return of the Shiite Twelfth Imam.

If it sounds crazy, it is.

Muslims hate Judaism and Christianity, as well as all other religions. Killing the "infidel," the unbeliever, is deeply embedded and justified in Islam.

The Israelis know this better than most and for this reason they will likely risk everything to end the threat of a nuclear Iran. They have acted twice to destroy nuclear reactors in Iraq and in Syria. If they are successful, they will have saved mankind.