Alan Caruba
If it was a boxing match

October 5, 2012
John McCain, commenting on the Romney-Obama debate, said that, if it was a boxing match, the referee would have stopped it in an early round. Obama was well and truly pummeled throughout, looking like he wished he was somewhere, anywhere else.

For me, the most revealing aspect of the after-debate result was the way the liberal media agreed on the success of Romney's performance and the failure of Obama's. 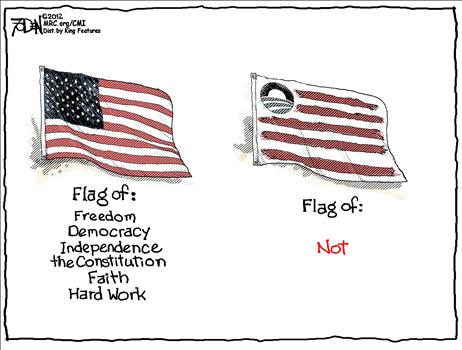 The New York Times front page had an article confirming that view and, inside, there was a weak defense of Obama as it tried to discredit Romney, claiming that he had abandoned his positions during the Republican primary debates, but failing to note that the audience then was, of course, Republicans!

Chris Matthew's meltdown on MSNBC following the debate has already gone viral as the video makes the rounds of the Internet. From Michael Moore to James Carville the liberal outrage, anger at Obama, and sense of defeat was on full display.

From The Huffington Post to virtually every other liberal media outlet, the judgment was the same, a serious loss and setback for Obama, but this time Obama had a record to run on and it was one of failure.

The next debate will be devoted to foreign affairs and Obama's only claim to fame will be the killing of Osama bin Laden. In its aftermath, much of the Middle East and North Africa's Maghreb was subject to the gains of the Muslim Brotherhood and, of course, the recent attack on the U.S. Libyan consulate and the killing of our ambassador and three other staff. The Obama administration initial cover-up that followed was an insult to everyone who made the immediate 9/11 connection.

Living through history a day at a time is often tiring as bad news piles up, but I think historians will record the debate as the end of the Obama regime and of the myths that have been promulgated by the mainstream media. I suspect that many liberal newspapers will endorse Romney if only to put distance between themselves and the last nearly four years.

I wrote of "election fatigue" prior to the debate, but it turned that factor around for Mitt Romney whose stellar, fact-filled responses and disputing of Obama's misrepresentations was a shot in the arm even to those who had previously been reluctant to vote for him.

The debate was one for the history books that will rank with the Kennedy-Nixon, Reagan-Carter, and Bush-Gore debates. Estimates of those watching ranged from 40 to 60 million and no matter the numbers they were the likely voters in November.

The 2008 election was about personalities with a timid McCain pitted against a virtually unknown young candidate at his best only when reading from a Tele-Prompter. Obama's early reliance on the device quickly became a joke.

I am a fan of professional boxing and have seen many matches ended by referees when one man is being decisively beaten and subject to serious physical harm. If the debates to follow, including the one pitting the vice presidential candidates, reflect a similar match between the opponents, the future of the nation is about to take a turn for the better.

The real advocate of "hope and change" during Wednesday evening's debate was Mitt Romney.