Alan Caruba
It's time to buy a gun

December 19, 2012
Over the past year I endured a hefty measure of stress due to a "noisy neighbor" in the apartment adjacent to mine that caused me to lose thirty pounds. I could never enter my bedroom without pausing to listen for the pounding, rhythmic sounds of music he favored. I would be awakened from an afternoon nap by them. In the evenings I could often not watch my television or read a book. 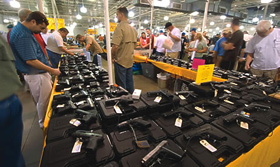 This neighbor was visited four times by the local police, responding to the noise ordinances that prohibit such behavior, but it did not cause him to lower the volume or when he chose to play his music. He received numerous calls from the management office to lower the volume, but ignored them. In the end, management, based on his behavior and other incidents, served him with an eviction notice. He remained in his apartment for the sixty days, as per the law, after he was given notice to leave and management was working on a court order to force him out when, two weeks beyond his end date, he "voluntarily" moved out.

I cite this because, from the first day he moved in and shortly thereafter, I was confronted by him in an aggressive fashion and had cause to be concerned for my personal safety. As a gun owner, I began to routinely carry one, albeit concealed and despite the fact that it would have taken me months to secure, if ever, a concealed carry permit. My State, like Connecticut, has some of the strictest gun laws on the books.

Among gun owners, the cliché is that "A gun in the hand is quicker than a cop on the phone."

I cite this personal experience in light of all the calls for more gun laws, most of which I regard as totally idiotic. A background check is probably a good idea, but it also probably says nothing about the mental stability of the person under review. Certainly, we don't want convicted felons to receive a permit to purchase, but criminals are not famous for obeying the law. Those with a history of mental illness should clearly be prohibited from gun ownership.

I am reminded that the Colorado movie killer. James Holmes, was under the care of a psychiatrist and she surely had cause to alert authorities, but by the time she did it was too late. Even if someone is seeking psychiatric counseling, it does not mean that local law enforcement authorities can intervene because there is no actionable cause to do so. There are often good reasons to seek help.

There is, in reality, little one can do under circumstances when a crazed gunman is loose in a school, a mall, a movie theatre, or anywhere else, other than to have the option to shoot him; waiting for the police to show up only results in a higher body count.

For this reason, I have no problem with laws permitting the concealed carry of handguns and in those states that permit this option the homicide rates and home invasion rates are considerably lower than in states that do not.

It is not the guns that are the problem, it can be the "noisy neighbor" or a crazed person bent on killing as many people as possible before either committing suicide or "suicide by cop."

By the end of this month, the incessant, 24/7 media coverage of the Newtown massacre will have abated. This will be followed by congressional hearings that will repeat all the known facts about gun ownership in America and the Second Amendment that grants Americans the right to own and bear guns. By "bear guns" it means the right to carry them.

By this time next year, the Newtown massacre will have been largely forgotten in the same way the Columbine school tragedy and similar incidents have faded from memory and discussion.

The fear that 9/11 generated served only to create a huge government bureaucracy, the Department of Homeland Security, and the expansion of surveillance of every citizen. It did not stop the "underwear bomber" on Christmas in 2009. He was, instead, read his Miranda rights when the bomb failed to detonate and kill everyone on the plane. The realization that the U.S. is engaged in a vast counter-intelligence and counter-terrorism endeavor has barely penetrated the awareness of most Americans.

In a 2007 commentary, "Buy a Gun," by Chuck Baldwin, he wrote: "One thing the national news media will always ignore is the practice of lawful self-defense. For example, most people are probably not aware of the fact that American citizens use a firearm to defend themselves more than 2.4 million times EVERY YEAR. That is more than 6,500 times EVERY DAY."

"This means that, each year, firearms are used 60 times more often to protect the lives of honest citizens than to take lives. Furthermore, of the 2.4 million self-defense cases, more than 192,000 are by women defending themselves against sexual assault. And in less than eight percent of those occasions is a shot actually fired. The vast majority of the time (92%), the mere presence of a firearm helps to avert a major crime from occurring. That is what Congressman Roscoe Bartlett (R-MD) concluded after extensive research. According to Rep. Bartlett, the number of defensive uses is four times the number of crimes reported committed with guns."

America does not have a "gun culture." It has a "gun history" based on their use by its earliest colonists and settlers. It exists because guns were widely owned by men who formed local militia prior to the Revolution, stopping the British at Concord, and, afterword, when the Constitution was written by men who understood the long history of tyranny, they ensured that every American had the fundamental right of self-defense and a need to be armed in the event the government turned away from law and toward oppression.

Talks with North Korea have not deterred that nation from developing nuclear weapons and the missiles to deliver them. Talks with Iran have only provided that nation's leaders, fanatical Muslims, with the time to do the same thing. Talks with Syria did not spare the lives of tens of thousands by that nation's dictator. Both the President and his Attorney General have made no secret of their wish to restrict gun ownership.

The whole world is one huge armed camp and it needs to be.

Reportedly the mother of the Newtown killer owned several guns, including handguns, an assault rifle, and two hunting rifles. She had taken her sons to ranges to instruct them in their use, was a "survivalist," was unhinged over the prospect of a world she believed was on the verge of violent, economic collapse. The school massacre was a tragedy waiting to happen. The guns were just the means with which it was carried out. Had any of the teachers or administrators at the school been armed, it might have been stopped or mitigated.

These are matters that go well beyond defending oneself against a neighbor acting in ways that disturb those around them. The four visits by police to my noisy neighbor had no effect except to build a file that could be used to evict him. He's gone. I am safe again.

America already has thousands of laws on the books regarding the purchase and carry of guns. In Colorado in the immediate wake of the Newtown massacre, more than four thousand people applied to secure permits to purchase guns. We need less laws and more guns. They will protect people in ways a desperate call to the local police cannot.