Alan Caruba
Enemies of the Constitution

February 4, 2013
Perhaps the stupidest idea given an airing in a recent edition of The New York Times is Prof. Louis Michael Seidman's opinion, "Let's Give Up on the Constitution."

According to his commentary, Prof. Seidman has "taught constitutional law for almost 40 years" and he was "ashamed" it took him that long to conclude that it was an outdated, "bizarre" document. 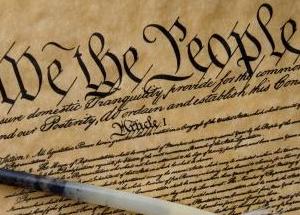 Apparently President Obama, who was a lecturer in constitutional law at the University of Chicago Law School, arrived at that conclusion more swiftly. His disregard for the Constitution recently got a slap down from the courts that ruled his recess appointments to the labor relations board were unconstitutional insofar as the Senate was not in recess.

I am not a constitutional scholar, but it should be self-evident that the oldest living constitution in the world has served to create and maintain the greatest republic in the world. Prof. Seidman asserts that Americans have "an obsession" with the Constitution and that is a very good thing indeed. Without it, we would likely have fallen prey to tyranny.

The framers of the Constitution did not spring it on their fellow citizens as a fait accompli, but rather as a new instrument of governance to replace the failed Articles of Confederation. A literate population was able to read the Federal Papers that argued for its various elements. It was submitted to the legislatures of the states for ratification.

We can thank those legislatures for the Bill of Rights because they insisted on amendments that would protect the right of free speech, freedom of the press, freedom of religion, the right to bear arms, and other elements that protect the individual against abuses of power that we take for granted, but which exist throughout the world. It can be argued that the Arab Spring that overthrew a number of Middle Eastern despots are a reflection of those rights as understood by citizens in nations that have never enjoyed them.

We tend to forget that many nations even today are ruled by monarchs and others exercising power that denies their citizens any definition of freedom. The Founding Fathers, having fought a long war against the English monarch and his parliament, were particularly sensitive to that, creating an instrument of governance that deliberately created a system of checks and balances to ensure that no President or Congress could act in a manner contrary to the intent of the Constitution.

The Constitution intended to slow down the process of legislation to ensure it received a full debate and was not subject to the whims of the times. In a January 2011 policy analysis published by the Cato Institute, Marcus E. Ethridge noted that "In the wake of the 2010 elections, President Obama declared that voters did not give a mandate to gridlock. His statement reflects over a century of Progressive hostility to the inefficient and slow system of government created by the American Framers," adding that "A large and growing body of evidence makes it clear that the public interest is most secure when government institutions are inefficient decision makers."

The most recent example of this was the 2,000-plus page Patient Protection and Affordable Care Act (Obamacare). At the time, then Speaker of the House, Nancy Pelosi, famously said that "We have to pass the bill so that you can find out what's in it." That's the opposite of what the Framers had in mind and is an example of what happens when a political party acts in a tyrannical manner. We are already finding out that Obamacare is causing healthcare insurance rates to increase and will deny healthcare to older Americans and others deemed by bureaucrats to be a burden on the system.

Even so, the Supreme Court which is supposed to protect Americans from abuses of the Constitution, deemed Obamacare to be a "tax" and thus legal. The Obama administration had argued that it was not a tax until it got in front of the Court. The Court had long since dropped the ball, allowing the Commerce Clause to be stretched beyond its intent to permit Congress to justify all manner of legislation and regulation of the nation's economy.

The Framers had to compromise on the issue of slavery, in effect "kicking the can down the street" in order to get assent from the Southern States. The Supreme Court exacerbated this with the Dred Scott decision that ruled that blacks were property no matter where they were. The result was the Civil War.

The argument that the Constitution is an outdated document ignores the fact that it has been amended twenty-seven times and remains the gold standard of law in America.

There are many enemies of freedom and Prof. Seidman's opinion is just one example, a reflection of the way some intellectuals hold the rest of us in contempt.

One of the greatest plagues on mankind was the notion of communism, the product of Karl Marx's hatred of private property – the keystone of the Constitution – and the view that people should be seen as a collective, not as individuals. The Constitution affirms that the power of government resides in "the people" who, as individuals, determine who shall "represent" them and are to be protected against the arrogance of power that spawns the inclination to "rule" rather than represent.

The Framers of the Constitution understood this. It is the only thing that stands between us and a tyrannical government run by Progressives, Liberals, and Marxists.