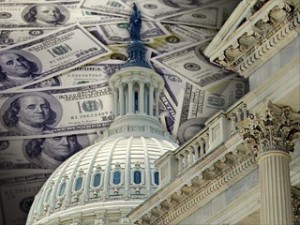 The one thing the "sequester" did was to get people asking why government spending could not be reduced. Adding to the drama of the automatic cuts was the sky-is-falling, government-services-will-stop, and comparable lies the President and his cabinet secretaries told until it became obvious that the public was not buying it.

What the President did not talk about was the incredible, obscene waste of taxpayer's money that goes on every day in every department and agency of the U.S. government. Americans are so accustomed to hearing everything described in the billions and trillions, they have lost sight of what these numbers really mean and this is particularly true in light of the nation's huge, growing debt and deficit.

It's not like independent organizations like Citizens Against Government Waste don't keep watch and report the waste. It has gained some fame for its annual "Pig Book," a list of absurd spending. To its credit, the Government Accountability Office occasionally issues a report on waste when some member of Congress requests it.

Even a casual bit of research turns up item after item that, were Americans not so apathetic and indifferent to government waste, it would result in huge rallies in Washington, D.C. calling for change. There is none.

Here are some examples, a mere handful from the many anyone can discover by simply Googling "government waste."

# The government spends $1.7 billion for maintenance on empty buildings it owns, although some sources put the figure at closer to $25 billion. The Office of Management and Budget estimates that 55,000 properties are underutilized or entirely vacant.

# The federal government owns approximately one-third of all U.S. land. It does not need more land and it could be argued that it should not own 80% of Nevada and Alaska, and more than half of Idaho. That said, it wants to spend $2.3 billion to purchase more land and the National park Service currently has a backlog of maintenance tasks totaling $5 billion. These include parks that the Obama administration was saying would all have to be closed down because of a sequester reduction of a mere 1.2% of all federal spending.

# Homeland Security's Janet Napolitano was issuing statements about the sequestration cuts to her department, but according to Tom Schatz, president of Citizens Against Government Waste, the department has $9 billion in unspent preparedness funds. How much of that will be spent on purchasing more DHS ammunition? They have already purchased enough to shoot every American five times.

# Republican lawmakers in Congress took the sequester fear-mongering as an opportunity to note, as Rep. Tom Price (R-GA) said, "There are pots of money sitting in different departments across the federal government, that have been authorized over either a number of months or years."

# Rep. Tom Coburn (R-OK) is a leading budget hawk who identified programs to fund a space ship to another solar system, funds for advancements in beef jerky from France, and $6 billion for research to find out what lessons about democracy and decision-making can be learned – from fish!

# While you're trying to figure out how to pay your 2012 taxes, give a thought to the National Science Foundation $350,000 grant to Perdue University researchers on how to improve your golf game.

# Not to be outspent, the National Institutes of Health gave a $940,000 grant to researchers who found that the production of pheromones in – wait for it – fruit flies, declines over time. Turns out that male fruit flies were more attracted to younger female fruit flies. The NIH also paid researchers to find out why gay men in Argentina engage in risky sexual behavior when they're drunk and spent $800,000 in "stimulus funds" to study the impact of a "genital-washing" program on men in South Africa. You can't make up this stuff.

# For reasons that defy sanity, various elements of the government have spent $3 million for research on video games; $2.6 million to train Chinese prostitutes to drink responsibly; a whopping $500 million on a program that would, among other things, try to figure out why five-year-olds "can't sit still" in a kindergarten classroom; and grants such as $1.8 million on a "museum of neon signs" in Las Vegas, Nevada.

# Sanity does not apply to the $2 billion given annually to U.S. farmers to not farm their land. Don't even ask about the Defense Department. It has long been famous for waste.

While all this has been going on, in 2010 the Office of Management and Budget determined that $47.9 billion was spent on fraudulent or improper payments in Medicare and the problem still hasn't been fixed, though the cost is now up to $62 billion. There's been $2.7 billion in fraud and mismanagement of the food-stamp program. And on, and on, and on.

If you just added up the billions cited in this brief look at waste, the federal government might actually be able to get by without having run up the national debt to more than $16 trillion and running trillion-plus annual deficits.