Alan Caruba
The world is not having enough babies 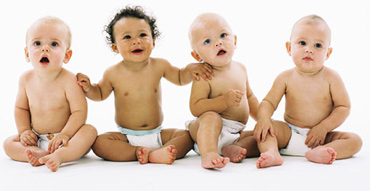 "Today, American pets now outnumber American children by more than four to one."

When a nation's population fails to reproduce and replace its population, it goes into decline. That is the theme of Jonathan V. Last's new book, "What to Expect When No One is Expecting: America's Coming Demographic Disaster." Fertility rates may seem an odd topic in the midst of anemic economic growth, raging debates about entitlement programs, a government in gridlock, and threats from external enemies, but they are critical the nation's future.

"In order for a country to maintain a steady population, it needs a fertility rate of 2.1" but America's rate "currently sits at 1.93." Declining populations have always followed or been followed by Very Bad Things. Disease. War. Economic stagnation or collapse. And these grim tides from history may be our future, since population is where most of the world is heading."

Yes, the world. It has all manner of implications, not just for the U.S., but for nations like China and Russia where their leaders are urging their populations to have more babies. 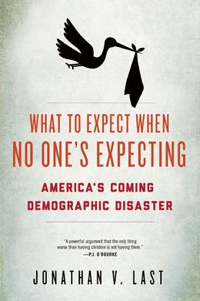 "Our modern world has evolved in such a way as to subtly discourage childbearing. It's not a conspiracy. None of these changes was intended to drive down fertility" which means "that there is something about modernity itself that tends toward fewer children" no matter what nation or region of the world.

In the U.S. one of the factors has been the legalization of abortion in 1973. Last notes that "The widespread practice of abortion culled an entire generation's worth of babies that otherwise might have been born." An entire generation! When you add in the use of the contraceptive pill used by 17 percent of American women aged 15 to 44, that's 10.54 million women and they are predominantly well-educated, middle-class white women who are in their prime reproductive years. Since Roe v. Wade "more than 49.5 million babies have been aborted in America."

The "pill" in addition to other factors has altered the behaviors that lead to making babies; sex, dating, marriage, and births; not that women stopped having babies. "By 2008, 40.6 percent of all births were to unmarried women." That alters a society – any society – in which marriage and family are essential elements.

In the United States the cost of having a child is prohibitive. "It is commonly said that buying a house is the biggest purchase most Americans will ever make. Well, having a baby is like buying six houses, all at once." That tends to make couples stop after having just one.

In creating "entitlement" programs such as Social Security and Medicare the politicians failed to anticipate both the falling number of new citizens born and the rising number who are now living well beyond age 65 and requiring much more eldercare costs. These two programs, says Last, "have placed a serious and increasing burden on families, making it more difficult to afford the – also increasing – cost of children."

As more and more Americans have aged, "By 2010, just 2.9 workers were paying for the benefits of each retiree." Currently they are receiving $546 billion in benefits. Enrollment in Medicare by 2010 was 47.5 million "and each beneficiary cost $9,828 for a total of $523 billion. In that year, Medicare spent $32.3 billion in benefits than it took in. Forty cents of every dollar the U.S. spends involves Social Security and Medicare. Obamacare took $716 billion out of Medicare to pay for the new program that expands Medicaid and will add millions more to its rolls.

"Social Security and Medicare were conceived in an era of high fertility. It was only after our fertility rate collapsed that the economics of the programs became dysfunctional."

The feminist movement encouraged more women to go to college and join the workforce. "Simply put," says Last, "the more educated a woman is, the fewer children she will have in the course of her lifetime. Women are putting off childbearing until later in life and Last notes that "By 35, a woman has a 15 percent chance of being unable to conceive at all. And by a woman's 45th birthday, her chances of getting pregnant are nearly zero." My maternal grandmother married in her teens and had four daughters and one son by her mid-twenties. I have a family photo that shows her with her children. She looks like an older sister!

"The forces of demography," says Last, "are pushing every nation on earth in the same direction: fewer and fewer children."

If by now your eyes have glazed over and you need a stiff drink, consider that such fertility rates exist no matter how our politicians struggle to deal with union pension and healthcare benefits, and the programs created to provide "a safety net" for Americans.

Add to this populations migrating to where jobs exist or where wars cause them to flee to safer places. Then there are nations with imbalances involving large numbers of young men and not enough young women to marry. China now has 123 boys born for every 100 girls. Last notes that, "a skewed sex ratio has often preceded intense violence and instability."

Now compare this relentless arithmetic of demography against the absurd focus of national leaders on the planet's climate as if anything can be done to alter or affect it.