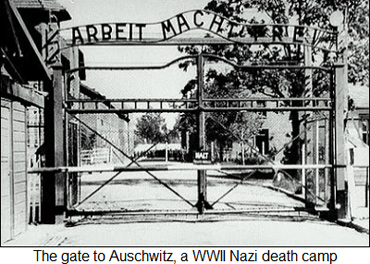 Mankind's capacity for hatred never fails to impress me. It is the source for the evils of war, genocides, and the long litany of horrors. In the last century it manifested itself with the Armenian genocide by the Turks, the Holocaust by the Nazis, the inter-tribal massacres in Rwanda, and, of course, wherever you found communism, you found also the deaths of millions.

There has been a spate of articles regarding the rise of fascist groups in Europe and, in February, the House Committee on Foreign Affairs held a hearing on the rise of anti-Semitism, calling it not only a threat to Jews, but to other religious minorities and the ideal of tolerance in general.

Anti-Semitism ranks among the world's oldest hatreds. It is endemic to Islam, but the hatred of Christianity and all other religions is a pillar of faith in Islam whose "holy war" is contributing so much unrest in the world today. Islam's earliest efforts to penetrate Europe were stopped in 732 at Poitiers, France and 1683 outside of Vienna. In 711, Muslims had invaded Spain and remained until they were driven out seven centuries later. The Crusades to redeem Jerusalem were conducted from 1095 to 1291.

The Jews have always been a minority. The best estimates are that there are about 13,800,000 Jews in the world today and reportedly their numbers are declining. It was big news in March when the Jewish population of Israel passed the symbolic six million mark that was set by the Holocaust that killed a comparable number in Europe during World War II.

The U.S. formerly had the most Jews of those living outside of Israel, estimated at 5.5 million with two million in New York City. France has 500,000, mostly in Paris and Canada has 380,000, mostly in Toronto. Founded in 1948, many of Israel's earliest citizens were Jews who were forced to flee from Middle Eastern nations after it declared independence. Others were refugees from the Holocaust and, later, Jews from Russia.

Still, reports of anti-Semitic events and groups draw attention, but it is an exaggeration to say that Europe is a hotbed of hatred for Jews. It has gained momentum from the influx of Muslim immigrants from the Middle East and North Africa, but there is nothing new about Islamic anti-Semitism and it had existed in Europe for centuries.

It is fascism, ultra-nationalism, in which anti-Semitism is a useful tool to advance its aims by focusing, as Hitler did, on Jews as a threat; usually depicted as "controlling" the banking system, the media, and the government. Always a minority – in the emerging era of globalism that is absurd.

The United Nations remains a hotbed of anti-Semitism, sometimes called anti-Zionism, directed at Israel, but a glance at the map of the world reveals it is a very tiny nation surrounded by Muslim enemies for whom it serves as a way to divert their populations' attention from the oppression that is endemic to its various dictatorships and monarchies. Anti-Semitic propaganda rages throughout these nations.

Recently, the rise in Greece of a fascist organization, the Golden Dawn party, has drawn attention. The extremist group is reportedly seeking to forge links with British neo-Nazis and begun to open offices in Germany, Australia, Canada, and the U.S. The success of Golden Dawn and similar groups will be linked to the financial stability of these and other nations. Lacking that, all manner of ills will escape from Pandora's Box.

This is not to suggest that anti-Semitism in Europe or anywhere else does not pose a problem to the Jewish population wherever they live. I marvel that there are small communities of Jews that still live in Islamic nations, as they do in many other nations. The bulk, though, now live in Israel and in America.

The ultimate form of anti-Semitism is the threat of the Iranian regime to destroy Israel and Israel gives no indication of permitting that to occur, whether it has the support of the U.S. or not. Israel has twice destroyed nuclear facilities in Iraq and Syria. It has, within the past two years and as recently as a week ago punished those in Gaza who continue to launch rockets with air strikes. The Palestinians could have peace and a nation of their own if they would recognize Israel's right to exist, but that remains unlikely.

Anti-Semitism is a problem for the Jews and always will be. It becomes a problem and a warning for others when it is used to advance fascism.