April 7, 2013
When I was a teenager I was a magician performing at birthday parties and before local clubs whose adults enjoyed legerdemain as much as the kids. The essence of magic is diversion, distracting the audience to watch the right hand while the left is setting up the illusion. It was a lesson I never forgot as I watch politicians divert attention from their actual agenda and right now President Obama is engaged in that as he goes around the nation asking for more gun control. 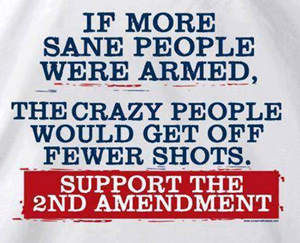 The killings in Colorado and at Sandy Hook school were committed by certifiably insane individuals. No background check can determine a person's sanity. If seeking the advice and care of a psychiatrist and psychologist would disqualify a person from gun ownership than their privacy will have been invaded in ways prohibited by medical ethics and the constitutional right to privacy. Police cannot arrest anyone on the suspicion they're nuts. The only protection against them is a sane armed gun-owner.

The right to self-defense is as old as mankind. All tyrannical governments seek to disarm their citizens. The Founders of America understood this. Thomas Jefferson said, "No free man shall ever been debarred the use of arms. The strongest reason for the people to retain the right to keep and bear arms is, as a last resort, to protect themselves against tyranny in government."

It has become a cliché to say that Barack Obama has become the greatest gun salesman because, as noted in a December 2012 report by CNSnews.com, "Compared to the number of background checks completed from January through December of 2011, all but two states saw net increases in gun sales in 2012." Background checks to ensure that those with criminal records are a good idea, but criminals or crazy people can always get their hands on a gun. The Sandy Hook murders were perpetrated by a lunatic using the legal guns purchased by his mother. She was his first victim.

In 2011 gun owners in America outnumbered hunters by 5 to 1. Hunters constitute only 15.9% to 18% of the estimate 70-80 million gun owners. Together they owned an estimated 300 million firearms, about 100 million of which were handguns.

That is one hell of a voting bloc!

The members of Congress know this. Writing in January, Wall Street Journal columnist, Kimberley A. Strassel, castigated "the elites" noting that the "one issue on which Congress still resoundingly agrees" is gun rights. The so-called debate over gun-control is led by the most elitist of all, Obama.

"On the other side," wrote Strassel, "is the reality that any of these proposals must, in the normal course of things, pass Congress. A few quick facts about that body. (1) More than half of its members have an 'A' rating from the National Rifle Association. (2) The few members today calling for gun control are the same few who have always called for gun control. (3) The House is run by Republicans."

"Even were the Senate to summon 60 votes (unlikely), and even if Mr. Boehner to risk the renewed wrath of his caucus by moving such a bill (crazy unlikely), any legislation would fall to members such as Virginia's Bob Goodlate (who runs the Judiciary Committee) and Pete Sessions (who runs the Rules Committee). Mr. Goodlate is strong on gun rights. Mr. Sessions is from Texas."

A new gun control law on top of the 1,100 that already exist is dead on arrival in Congress. Harry Reid, the Senate Majority Leader, knows this. Even Obama knows this. So why is he going around the nation giving gun control speeches? It is the old magician's trick of diversion and distraction. Gun control has no priority in a nation awash in debt, concerned about illegal immigration, and even threatened by the insane leader of North Korea.

"The more sweeping any gun proposals," observed Ms. Strassel, "the more dead on arrival they will be in Congress. Mr. Obama might know that and be planning to take credit for going big while blaming failure on Congress. If so, he'll have to beat on his own party."

There are harsh, irresponsible and irrational gun control laws being passed in heavily liberal states, but they can and will be repealed in time as political control passes to legislators who get elected running against them. The Wall Street Journal reports that "This year, five states have passed seven laws that strengthen gun restrictions, while 10 states have passed 17 laws that weaken them, according to the Law Center to Prevent Gun Violence, which tracks and promotes gun-control-laws.

Nothing can be done to stop the crazies, but the vast numbers of gun owners are not crazy. They are, however, worried about a government showing signs of trying to take their guns away. Elections are a defense against such actions.