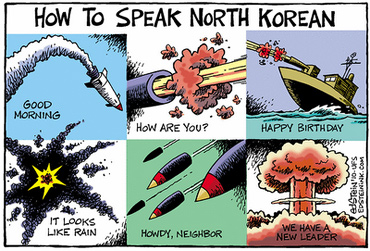 Wouldn't it be ironic if President Obama – who has shown that his every instinct is to pull back from any war or military conflict – ends up being a "war President" thanks to Kim Jung Un, the demented little dictator of North Korea?

I was about four months' shy of becoming a bona fide teenager when North Korea invaded South Korea in 1950. The Second World War had concluded just five years before and Japan was still occupied by the U.S. military and would not become independent until September 1951. 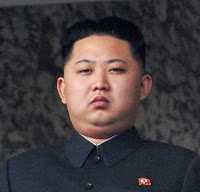 After World War II the Korean peninsula was divided between the Russians and the Americans with the 38th parallel as the line of demarcation known then and now as the Korean Demilitarized Zone (DMZ). It is 2.5 miles wide and the war has never been declared over. The Russians and Chinese backed the then-dictator, Kim Jung Un's grandfather. When he died, his father took over. The young dictator, age 29, has inherited their belligerent attitude, but he's the first to actually bring North Korea to the brink of a full-out war. When you tell diplomats to get out while they can, you are probably not bluffing.

There is little doubt that the military power of the U.S. can obliterate North Korea's capital and other military assets, but it is worth noting that the capitol of South Korea, Seoul, is just thirty-five miles from the DMZ. It is extremely vulnerable and home to some ten million Koreans.

Let me state that I do not anticipate North Korea starting a war. If it did, Obama will have to be "all in" to destroy the North Korean regime and, of course, the concern is that it is a satellite of China. In recent times, Chinese think tanks have been publishing papers denouncing North Korea for its provocative missile "tests" and its nuclear tests that generated further United Nations sanctions.

The last thing China wants are a million North Korean refugees fleeing across its border, nor does it want to be dragged into a war pitting it against the United States and other coalition partners. China would actually benefit from a unification of the two Koreas that would produce a very useful trading partner.

Writing in the Asia-Pacific Journal, Selig S. Harrison noted that the United States spends more than $40 billion annually to maintain its defense position in East Asia and the western Pacific.

Suffice to say the defeat of North Korea would deprive a number of rogue states of a supplier of missiles, nuclear expertise, and other armaments. The world would be a safer place.

Fraught with irony, the U.S. is currently in the midst of its annual joint military exercises with South Korea and has taken what Pentagon spokesman, George Little, characterized as "prudent, logical and measured" responses such as deploying missile defenses closer to North Korea, positioning naval assets offshore, and a host of other actions that make it clear that it is taking its threats seriously.

Technically, we are already at war with North Korea thanks to its announcement that it regards the armistice agreement null and void.

Obama has four years of experience in office and, though a defense budget-cutter like Bill Clinton, it is likely he has gained considerable insight to U.S. military capabilities. Politically, a short, decisive defeat of North Korea would briefly bolster his flagging popularity, hovering around fifty percent in the polls. Being a successful war President has its advantages, but it didn't help Bush41 get reelected after the Gulf War in 1990.

I'm guessing North Korea will do something quite minor from a military point of view; something not likely to evoke a hellish war and defeat. That's been his grandfather's and father's game. The U.S. will rebuke North Korea. ("Inappropriate!" "Unacceptable!" "Not nice.") Indeed, our presence may be the only thing keeping South Korea from heading north to give the third generation of trouble-makers a thorough thrashing.

So the world waits now to see what Kim Jung Un will do and what Barack Obama will do.