April 11, 2013
Usually a President is deemed a lame duck when he is in the final two years of a second term or has lost the support of his party in his first, losing political leverage for his agenda, but Obama has managed to render himself a lame duck barely three months into his second term and functioned as one through much of his first. 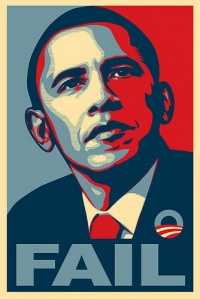 Excuse me, but other than Obamacare, can anyone name a single major piece of legislation that the President championed in his first term that got through Congress? And is it not true that Obamacare is falling apart before it goes into force in 2014? Nobody except Obama and Kathleen Sibelius, the Cruella de Ville doppelganger who serves as the Secretary of Health and Human Services, thinks it's a good idea.

The President's epic failure to sink more than two basket balls out of twenty-two tries during the Easter Egg Roll celebration at the White House instantly became symbolic of his other failures to date.

The political pundit, Karl Rove, writing in late March, said "The budget drama reveals a more important phenomenon – that Mr. Obama has become a minor actor on Capitol Hill. On a growing array of issues, members of both parties have come to understand that progress is more likely with the president on the sideline."

"There has been no movement in Congress on the president's carbon tax," said Rover. "During Saturday's budget debate, 79 senators supported repeal of Obamacare's tax on medical devices and 62 senators back construction of the Keystone XL pipeline (alas non-binding votes). On issue after issue, Mr. Obama is being routinely ignored or rebuffed."

The sequester budget cuts, the result of the inability of Democrats and Republicans to come up with a plan to cut spending as a response to America's huge national debt, were used by the White House to frighten Americans into accepting more spending, but that quickly fizzled and created a backlash of derision.

Under Obama, the nation's economy has been a slow motion disaster. His reelection came as a shock to the Republican Party, but the combination of a lackluster candidate, the decision of millions of Republicans to stay home on Election Day, and a well-organized and funded Democrat machine gave Obama a victory. The media began to refer to "low information voters" to describe those who blindly ignored the facts and voted for Obama.

This occurred despite the fact that Obama added more debt than all the previous presidents combined. He is the first President to see America's top credit rating reduced.

On issue after issue, Obama's promises did not even begin to solve the problems he was elected to solve. 2012 marked the fourth year that the deficit exceeded one trillion dollars. It is the difference between the money the government takes in and what it spends.

There was little help for homeowners whose mortgages exceeded the value of their homes. By the end of 2012, there were 5.6 million residential mortgages in delinquency or foreclosure. The 2008 financial crisis was precipitated by Fannie Mae and Freddie Mac, two government sponsored agencies that owned fifty percent of all the mortgages, had bundled them as assets, and sold them to investment firms and banks. It resulted in the failure and forced mergers of the former and a massive taxpayer bailout of the latter. As this is being written Fannie Mae and Freddie Mac, both seized by the government and bailed out, are urging banks to make the same bad loans that led to the financial crisis.

Obama's energy policies focused on "green" energy, wind and solar projects, along with electric cars and even high-speed rail. The bankruptcy of one solar firm after another was testimony to how wrong the waste of billions in loans, grants, and subsidies has been. Wind power exists mostly due to government assistance and mandates. The latest to totter on failure is Fisker; the electric car manufacturer that just announced it was laying off seventy percent of its employees. In all of these companies, billions of government "investment" – taxpayer's money – was lost.

While that was occurring, coal-fired plants were being closed down thanks to the administration's war on coal, an energy resource the U.S. has in abundance; enough for hundreds of years' use. With 170,000 miles of pipelines, Obama's opposition to the Keystone XL pipeline not only made no sense, it ignored the 20,000 jobs it would create. At one point, Obama was recommending algae, pond scum, as an energy source.

In the area of foreign policy, Obama has proved to be a spectacular failure. His 2009 trip to Cairo to deliver a speech he was sure would transform the Middle East did not turn out as planned. The Muslim Brotherhood guys in the front row managed to replace the then-Egyptian president Mubarak with a nut job, Morsi, who it seems much of the population hates even more. Obama's indifference to the outcome in Libya got his ambassador and three others killed in Benghazi. In early 2013 Obama had to use his first trip to Israel as President as a means to redeem himself from appearing to be too big an idiot regarding the only real ally America has in the Middle East.

Under Obama, there was a failure to negotiate a status of forces with Iraq, requiring our complete withdrawal after a decade in which that war proved to be a failure of planning and of securing the trust and support of the Iraqi people. When the U.S. leaves Afghanistan in 2014, it will likely revert to Taliban control. The overall result in both conflicts has been a big fat zero and, while blame can be assessed to the Bush43 decisions, the failure to maintain any U.S. presence belongs to the Obama administration.

None of Obama's policies have resulted in any success, but his failures regarding the U.S. economy have been the most dramatic. Unemployment is down from the 8.1% levels, but just barely. Commenting on the latest job report, Robert Luddy, a member of the Job Creators Alliance, said, "Today's jobs report is no surprise to job creators because it reflects the reality we see every day: this economic recovery is rocky at best and Washington policies only make job creation worse. Companies added the fewest jobs in nine months, which is a remarkable retreat from the illusory numbers we saw in February."

The unemployment rate fell slightly last month only because jobless Americans are losing hope – a half million people dropped out of the workforce in March and aren't even counted into the rate. America must generate 125,000 jobs a month to just keep up with population growth; we added only 88,000. We are at a 63.3 percent participation rate, which is the lowest rate since May of 1979. Welcome to Carter country – an American economy of slow growth and anemic job creation."

Even the President's gun control initiatives have backfired on him as Democrats in Congress look to the 2014 midterm elections with trepidation. He ignored Congress throughout his first term, using executive orders, to advance his agenda, but payback has already made him a lame duck president and, as noted, that's the good news.