April 17, 2013
Listening to President Obama respond after a terrorist attack takes the lives of innocent Americans is like being trapped in an echo chamber. The words all sound too familiar.

This is what he initially said after the Boston Marathon bombings. "We still do not know who did this, or why, and people shouldn't jump to conclusions before we have all the facts, but make no mistake: We will get to the bottom of this. And we will find out who did this, we'll find out why they did this. Any responsible individuals, any responsible groups will feel the full weight of justice," 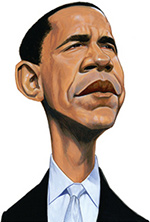 The day following the November 5, 2009, shootings that killed thirteen and wounded many others at Fort Hood, Texas, the President held a press conference. He began his remarks with a two-minute "shout out" to members of the Tribal Nations Conference who were in attendance. He then proceeded to warn Americans against "jumping to conclusions" regarding the motives of the shooter.

It had been widely reported that Major Nidal Hasan had shouted "Allahu Akhbar" as he shot his unarmed victims. The payback for the heroes and survivors of the attack was its designation as "workplace violence" rather than terrorism, thus making them victims again with lower priority medical care and financial benefits. They were not in a beauty parlor at the mall; they were on a U.S. Army military base!

So, not "jumping to a conclusion" and promising justice begins to sound like official statements that are typed on a page Obama keeps in the bottom drawer of his desk, titled "Blah, Blah, Blah."

In the wake of the September 11, 2012 Benghazi attack that killed a U.S. ambassador and three security personnel, Obama said "We're going to find out exactly what happened. Ultimately, though, any time there is a death of an American overseas, I want to find out what happened, because my most important job as president is keeping the American people safe. And we will get to the bottom of what happened, and we're going to make sure most importantly that those who carried it out, that they are captured. My biggest priority right now is bringing those folks to justice. And I think the American people have seen that's a commitment I always keep."

And then the White House launched a bizarre effort to get the public to believe the attack was the result of a video no one had seen and that it was not the obvious work of al Qaeda. The very date on which it occurred – September 11 – made that clear. The failure to provide adequate security to a U.S. ambassador operating in a war zone and to come to his aid has largely been stonewalled by the White House. In the words of Hillary Clinton who was Secretary of State at the time, "What difference does it make?"

My first response to the President's initial statement about the Boston Bombings was to notice that he did not use the words "terror" or "terrorism." It took an unidentified White House official to call the event an act of terrorism later in the day.

Mary Kate Cary, writing in the October 11, 2012 edition of US News &; World Report, had noticed this as well. Referring to his speech in Cairo, Obama said he had come "to seek a new beginning between the United States and Muslims around the world; one based on mutual interest and mutual respect." Ms. Cary, however, noticed that "President Obama never once used the word 'terrorism,' just as he didn't in his address to the U.N. General Assembly" the month before. "His reluctance to denounce terrorism by name over the last four years is part of a pattern."

"The problem with using the word 'terrorist' is that it creates tension," wrote Ms. Cary. "Not only does it acknowledge that there are extremist elements in the Arab world, but it reminds everyone that the United States is vulnerable to attack. The White House doesn't like either of those. Better to disavow hateful videos and lone radicals, and say the system worked."

I don't know whether Obama even cares if people believe him when he repeats his empty admonitions and promises. He does his best to look serious when he tells us not to jump to conclusions and to expect justice, but we are still waiting for justice in the case of Major Hasan and still waiting for answers about what the White House did or did not do during the Benghazi attack. We do know that, after a good night's sleep, Obama flew to Las Vegas the next day for some fundraising.

I think the remainder of his second term will include more militant Islamist attacks on Americans. The enemy has concluded that Obama really doesn't care. He has a far greater agenda to wrap up, the "fundamental transformation" of America.