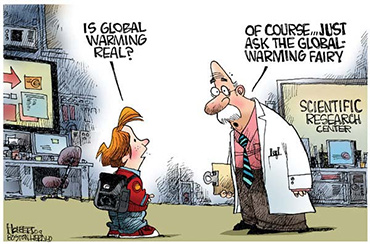 Monday, April 22, is Earth Day. Begun in 1970, it led to the creation of the Environmental Protection Agency, along with the Clean Air, Clean Water, and Endangered Species Acts. It is the global platform for the Big Lie that carbon dioxide (CO2) is causing the Earth to warm and the basis of the environmental movement's ceaseless efforts to reduce the use of energy for any reason.

Carbon dioxide in the Earth's atmosphere has been increasing, but the Earth has been cooling due to reduced solar radiation. CO2 has virtually no relationship to the climate except to show up well after a significant change has occurred.

On April 18, the Wall Street Journal reported that the International Energy Agency had announced that, despite spending "more than $2 trillion in investment into renewable-energy projects...the world had made almost no progress over the past 20 years in reducing the carbon content of its energy supplies." It has never needed reduction. How many hospitals, schools, bridges, and other useful things that could have been built instead?

Not one single piece of vegetation can exist without CO2. Without vegetation all animals and all humans would die. The Earth would look like Mars. One of the pillars of environmentalism is that humans are the greatest threat to the existence of the 4.5 billion-year-old Earth. The essence of Earth Day is that you are the enemy, primarily for your use of energy (coal, oil, and natural gas).

A global propaganda campaign will glorify Earth Day and its message is that you must change your life to accommodate the lies that sustain the environmental movement and permit government agencies such as the Environmental Protection Agency to strangle the economic life of the nation.

On Earth day there will be thousands of events to promote its anti-energy, anti-technology, and anti-humanity message.

There are thousands, of environmental organizations. Here, for example, are some Earth Day recommendations from the Natural Resources Defense Council.

# Wash clothing in cold water. According to the NRDC, "this saves a great deal of money as the bulk of the energy tied to clothes washing is used to heat water."

# Cut clothes dryer energy by 20 to 40 percent. "It is more efficient to spin water out of clothing than bake it out in the dryer."

# Select the 'normal' or 'standard' picture setting on your TV.

An environmental group called the Food Tank recommends the following:

# "Get in touch with agriculture. "This time of year, many people are starting to plan vacations." Forget Disney Land; instead choose a "farm-stay" in which participants spend a few days or weeks living with a host family...helping around the farm in exchange for free food and lodging."

# "Buy food with less packaging." This ignores the fact that modern packaging ensures the safety of the foods you purchase. Even ancient civilizations either burned refuse or created landfills.

# Do-it-Yourself projects such as "turning old t-shirts into produce bags to save plastic, starting seeds in eggshells..."

Behind the many Earth Day suggestions is the environmentalists' insistence on a general return to an era when household tasks were undertaken without machines that used electricity, before the ubiquitous benefits of plastic, and less cars were on the roads. In the 1940s my late mother had to wash clothes by hand and hang them in the back yard or basement to dry. Food was kept cool in an ice box before the invention of refrigerators. This is Earth Day's idea of saving the Earth.

Everyone wants clean air and clean water. We have it. The Clean Air and Clean Water Acts of the 1970s have achieved their goals. Substituting "clean energy" such as solar and wind power has proven to be expensive and impractical as neither of these produce sufficient energy (about 3% at present) to power America. Taxpayers have lost billions in the government loans made to solar and wind power companies while traditional sources of power contribute billions to the economy.

The Earth is not endangered, nor should it be worshipped as a pagan religion.

Behind environmentalism is panoply of schemes intended to enrich those who advocate "global warming" and/or "climate change." Governments around the world are abandoning "clean energy" programs and returning to traditional and abundant forms of energy.

The "science" behind climate change and the claim of a "consensus" among the world's scientists is a lie. Computer models have been rigged to produce "warming" data while the planet has been in a natural cooling cycle for the last seventeen years!

On Earth Day, you will be assailed by these and countless other claims, but you will do yourself and the Earth a big favor if you ignore them.