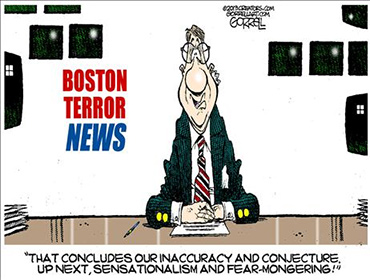 The Boston Marathon bombing was, by any measure, a major news story. It occurred on Monday, April 15. In the days that followed, Americans were surely interested in the effort to find and arrest the two brothers, Tamerlan and Dzhokar Tsaraev, identified as the perpetrators.

With specific regard to television news coverage, why that involved preempting all other news as well as scheduled broadcasting on the major networks, defies the imagination. Even the West, Texas fertilizer plant explosion got short shrift. Compounding the 24/7 coverage was the fact that so little was known during most of the week. Reporters began to sound like they were lobotomized.

I knew within moments after the identification of the Tsaraev brothers as immigrants from Chechnya that they were Muslims. I not only didn't need an expert to tell me that, but as the week continued, the real mystery is why news reporters and anchors were so silent on this obvious fact. Chechens have a long history in the intelligence community as being among the leading volunteers wherever al Qaeda is engaged in terrorism or warfare.

At one point it was reported that "a foreign nation" had aided the U.S. with regard to information about the brothers, but it was pointedly left unidentified. It was, of course, Russia, that not only fought a war in Chechnya but was the victim of some vicious terrorist acts. It has since been reported that Russian counterintelligence had alerted our authorities about Tamerlan some two years ago!

It came out that Boston has a large Chechen community and, given their recent history in Russia, one really has to wonder what geniuses at the U.S. State Department thought it was a good idea to let them in. We are still giving out student visas like candy bars. Is there no place else they can get a higher education? The entry process for Saudis virtually comes complete with a limo to pick them up at the airport.

All this points to a lethal "political correctness" in the press and by the Obama administration that continues to obfuscate the fact that the terrorists, whether lone wolves or in cells, have been almost universally Muslims engaged in an Islamic jihad; one that has been going on since the seventh century.

In the weeks to come it would be a good time to do some reporting on the Muslim-American organizations that often appear to be little more than a protective veneer for the threats that have been around since the 1990s when the initial attack on the World Trade Center occurred. How many of these organizations are little more than a means to collect funds to be sent to jihadists? Why don't we know more about them?

Indeed, how many mosques are hotbeds of potential terrorism protected as places of worship? Were it not for the cooperation provided by courageous, patriotic Muslims infiltrating and reporting back to law enforcement authorities, we might not be able to anticipate the next attacks.

The President's warnings that we "not jump to conclusions" did not help anyone come to grips with the latest example of Islamic insanity and it would be well to remember that, even after 9/11, George W. Bush made a real effort, if not to exonerate Muslims in the U.S., at least to ensure they did not suffer collective blame. In the years since, there have been less than a handful of incidents directed against U.S. Muslims. This is, after all, America and we don't engage in such behavior. 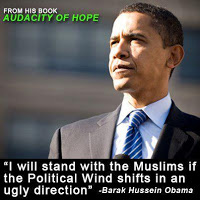 Concluding that the Boston Marathon bombings were the acts of jihadists was hardly a big jump. Contrast this with the deliberate agenda of the Obama administration to eliminate any mention of Islamic terrorism from all aspects of official statements and to install it as a domestic policy to the point where an obviously deranged U.S. Major Nidal Hasan was not cashiered out of the Army before the Fort Hood murders. He has yet to have been brought to trial as the lawyers continue to delay the process.

One thing came out of the news coverage and that was the sophistication and cooperation of our law enforcement agencies from the federal to the local level. It was very impressive and praiseworthy.

On June 16, 2011, I wrote a commentary, "The Terrorist Next Door", based on a book by Fox News reporter, Catherine Herridge, titled "The Next Wave: On the Hunt for Al Qaeda's American Recruits."

I wrote: "These days the National Counterterrorism Center must process a daily volume of information 'between eight thousand and ten thousand reports.' The threat made 'sharing data a matter of survival,' says Herridge. They include 'at least forty threats and distinct plots.' Perhaps the worst part of what an army of intelligence analysts determined was that the jihad and the terrorist's mind set was that "it's not a generational issue, it's a forever issue."

I am inclined to think that America will see an uptick in the number of attacks on "soft targets" by terrorists like the Tsaraev brothers. I also expect the bulk of the mainstream media to ignore or soft peddle the Muslim connection and try to portray the brothers as misguided youths.

After four years of President Obama's apologies to Muslims in the Middle East and everywhere else, his fumbling of the "Arab Spring" which saw the Muslim Brotherhood takeover of Egypt and, of course, the lies surrounding the Benghazi attack, our enemies have drawn their own conclusions about the weakness at the very top of our government.

How naïve were Americans to vote – twice – for Barack Hussein Obama?