May 13, 2013
The resistance to Obamacare is writing a new chapter in U.S. history. It may well become the most unpopular law since Prohibition became an Amendment to the Constitution in 1919. By 1933, another Amendment repealed it. 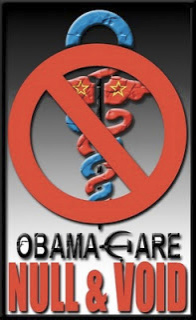 Obamacare passed by a straight Democratic party vote on Christmas Eve in 2009. No Republican voted for it and, as one poll recently revealed, a third of Americans are still unaware it is the law of the land. A divided Supreme Court gave it a pass, calling it a tax, but it is a profoundly unconstitutional law insofar as the federal government may not pass a law that requires Americans to purchase something and to fine them if they do not. It is also playing havoc with the economy, delaying recovery as it deters hiring and encourages firing.

Nonetheless, a number of states have gone on record seeking to nullify its enforcement and some are doing the same as regards gun control. Arizona became famous when it passed its own immigration law in response to the federal government's failure to protect its border with Mexico. The proposed "Gang of Eight" immigration law is facing stiff opposition for its various provisions, most of which do not address the central issue of security on the southern border.

How out of touch is the President? He went to Mexico and blamed the violence arising from its drug cartels on America, saying "Most of the guns used here to commit violence came from America." He made no mention of the scandalous "Fast and Furious" scheme in which the ATF actually ran guns into Mexico, claiming they would track them. It took an executive order to throw a blanket of silence over it and a compliant media to ignore that scandal.

It is, however, Obamacare that poses the greatest threat to the nation, intruding on the patient-doctor relationship, robbing billions from Medicare to pay for it, requiring states to fund more Medicaid when many are strapped to meet other needs, and putting 16% of the nation's economy under federal control.

A total of twenty-seven states have filed suit against Obamacare. Two federal judges have upheld its individual mandate to purchase health insurance and two others have ruled that it is unconstitutional.

Twelve states have introduced versions of the Federal Health Care Nullification Act that was drafted by the Tenth Amendment Center. They include Texas, Montana, Wyoming, Oregon, Alabama, and Maine. All declare that Obamacare is "hereby declared to be invalid, shall not be recognized, is specifically rejected, and shall be considered null and void and of no effect."

In South Carolina, on May 1st, the state House passed a bill that declares the bill null and void and goes a step further, criminalizing its implementation. Earlier Governor Nikki Haley, in her state of the state address, said that South Carolina does not want and cannot afford Obamacare, saying of the President's namesake, "not now, not ever."

The following day, Kansas Governor Sam Brownback sent a letter in response to Attorney General Eric Holder's opposition to its Second Amendment Protection Act, declaring it unconstitutional; essentially tell him to piss off. "The people of Kansas," said the Governor, "have clearly expressed their sovereign will." The same day, Missouri passed a comparable law protecting the Second Amendment.

Not since the years leading up to the Civil War was kicked off on December 20, 1860 when South Carolina voted for secession, has there been such open resistance to the mandates of the federal government by the states on a range of issues. Earlier, in 1832, President Andrew Jackson had threatened to send troops to South Carolina to enforce federal laws.

Nullification, however, will not succeed as a means to rid the nation of Obamacare. To Obama's dismay, his gun control law failed in Congress when even members of his party joined in voting against it. The fate of immigration reform remains unknown but it will come to a vote soon enough.

That has not discouraged the legislatures of many states from expressing their opposition to Obamacare, intrusions on the Second Amendment right of citizens to bear arms, and to demand the federal government enforce the laws regarding its borders.

There isn't a constitutional scholar that does not support the Supremacy Clause. The Heritage Foundation has a policy paper on the subject of nullification that says "there is no clause or implied power in either the national or the various state constitutions that enables states to veto federal laws unilaterally."

The states, though, can express their displeasure and their opposition to federal laws and that is what lies at the heart of the spate of nullification laws that have been passed. As sovereign republics, the states can and do express themselves and, through their elected Senators and Representatives, have the power in concert to repeal obnoxious and injurious federal laws.

That will be the fate of Obamacare.