Alan Caruba
All the things we do not know 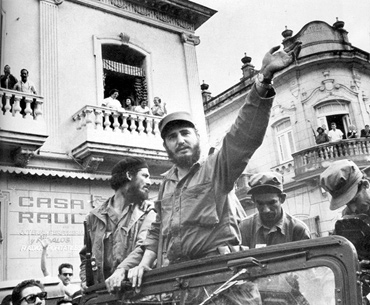 On January 8, 1959 as Fidel Castro was entering Havana after the dictator, Fulgencio Batista, fled the revolution that Castro had led there was much joy among the Cuban people except for those closely allied with the Batista regime and those who saw Fidel as a communist. Many of them fled and Miami would become an outpost and a hotbed of hatred for Castro.

That year I was a 22-year-old senior at the University of Miami where some wealthier Cuban families sent their sons and daughters for a higher education. I recall discussing the events with a young Cuban, Blas Herero, who was wondering if he should return. I was utterly clueless. Other than reading some articles that portrayed Castro as a liberator, what I knew about Cuba and Castro could have fit nicely in a bug's ear.

Castro had been actively trying to overthrow Batista since 1953. His brother, Raul, was known to be a communist and Che Guevera was a Marxist. As far as the U.S. government was concerned, Castro was a problem. He was a problem, too, for the Mafia that owned the casinos in Havana that were a major source of income. Batista received his payoff and the skim, overseen by Meyer Lansky, went to the Mafia bosses who had invested in the casinos. Castro would close them down.

Someone who knows a lot about such matters is William Wayand Turner, the author of a new book, "The Cuban Connection: Nixon, Castro, and the Mob" ($25.00, Prometheus Books). Turner is a former FBI agent who became an investigative journalist and author. Among his other books are "Deadly Secrets: The CIA War Against Castro" and "The Assassination of JFK" with co-author Warren Hinkle. Turner has personally interviewed many top Mafia members and many who were with Castro at the time and since.

Castro had more lives than the proverbial cat. He has survived more assassination attempts on his life that are known. He had the kind of luck that's rare, but many of the attempts, frequently the plots of the CIA and some in collusion with the Mafia, simply were bungled failures.

The most famous effort to overthrow Castro was the Bay of Pigs invasion on April 16, 1961, organized by the CIA and it was a huge embarrassment to President Kennedy and his brother Robert who at the time was the Attorney General. A year later, in October 1962 when I was in the U.S. Army, we all waited thirteen days to learn the outcome of the Cuban Missile Crisis. I was part of the Second Infantry Division and we were on full alert. Still in my twenties at the time, I was still essentially clueless about what had occurred except for what I heard on television. I was relieved the crisis was over and was discharged shortly thereafter.

It's what you do not know about what the government is up to that can get a lot of people killed. For example, on June 3rd, President Obama will sign off on a UN treaty which, if ratified by the Senate, would override the Second Amendment and deprive Americans of the right to own guns. A petition by the National Association of Gun Rights is circulating a petition to be sent to our senators to oppose it.

The problems the U.S. government encountered with Castro and his revolution began in April 1959 when the American Society of Newspaper Editors invited him to visit the U.S. President Eisenhower avoided meeting with him by being conveniently absent to play a round of golf in North Carolina. Richard Nixon, the Vice President, was assigned to meet Castro and Nixon who had risen to fame as an anti-communist had a three-hour meeting with him that destroyed any of Castro's hopes to align Cuba with the U.S. The Soviet Union stepped in to become Cuba's best friend.

"There are opinions pro and con," writes Wayand, "as to whether Castro was a communist before his revolutionary victory. Jim Noel, the CIA station chief in Havana, traveled to the Sierra Maestra range, where the revolutionary was based, to see for himself. His take was that Castro was not a communist. Representative Charles Porter, who spent quality time with Castro in Washington, was convinced he wasn't in the shadow of Karl Marx. The evidence stacks up that when Castro left Washington for home, he was not a believer in communism. This is convincingly illustrated by his vehement reaction to Nixon's charge that his administration was riddled with communists."

Fifty-five years later Cuba is firmly a communist nation with an authoritarian government and a captive population just ninety miles off the coast of Florida. For that we can thank Nixon. An irony of history was the fact that many of those caught during the bungled Watergate break-in were CIA contractors who had taken a role in some of the assassination attempts.

It's the things we do not know about that the government is doing that shape history and which currently are eroding rights that Americans take for granted.

What we are learning today is that the Obama administration has been waging a war on conservative organizations and a growing number of individuals who are coming forward to share their stories of how the Internal Revenue Service has been used to harass them.

What we know is that Obama is abandoning the Middle East to the control of al Qaeda and affiliated Islamist groups.

What we know is that the Obama administration engaged in a secretive program to run guns to the drug cartels in Mexico. An investigation into "Fast and Furious" was shut down by an Obama executive order.

What we know is that the administration has engaged in a hoax to hide the true facts behind the attack that killed a U.S. ambassador in Benghazi, Libya, and those who know what actually happened, including the President and the former Secretary of State, are still stonewalling inquiries. Others closer to the event have been silenced.

As Turner's book makes clear, it is what we do not know that is the real problem.