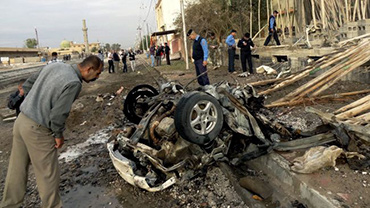 There's not much I like about President Obama's policies, but I am beginning to think that his resolve to militarily withdraw the U.S. from the Middle East is likely based on his insights into the Islamic mind.

The last U.S. troops left Iraq in 2011 and they are scheduled to leave Afghanistan in 2014. The President has been reluctant to send arms to the insurgents fighting Syria's regime on the grounds that they are likely al Qaeda or similar jihadist groups. Makes sense to me.

Using drones to target al Qaeda leaders wherever they can be found, Pakistan or Yemen for example, also seems a sensible application of limited force applied with extreme prejudice.

During the course of the nearly nine years the U.S. was involved in Iraq, the U.S. lost almost 4,500 troops there while the cost of Iraqi lives during that period is estimated to be 100,000.

I have been thinking about Iraq because the only news from that horrid nation has been about the constant bombings there. Not that long ago Iraq was front page news every day, but no longer. Recently two senior Arab journalists wrote about the war in Iraq and their views are quite instructive.

JihadAl-Khazen, a columnist for the London daily Al-Hayat, took the view in March that U.S. officials, including former President George W. Bush, Vice President Dick Chaney, and others, should be prosecuted and executed for "fabricating evidence to justify the war." To Western eyes, the actions of the former Iraq dictator, Saddam Hussein, may have had something to do with Bush's decision which came after 9/11 and had been preceded by the invasion of Afghanistan.

It was widely believed at the time that Saddam had stores of poison gas and it is now believed they were transferred to Syria to avoid detection. According to Al-Khazen, Bush's decision was based on the "pro-Israel gang of war" otherwise known as the neo-cons in the Bush administration.

Also in March, Abd Al-Bari Atwan, the editor of the London daily, Al-Quds Al Arabi, took the opportunity of the anniversary of the U.S. invasion to opine that Arabs are the victims of a series of ongoing conspiracies against them; conspiracies meant to serve Israel, seize the Arab's oil, and to sow sectarian strife between Sunnis and Shiites.

Moreover, this moonbat suggested that Saddam had been "tricked" into invading Kuwait by the then U.S. ambassador and several Arab leaders. The notion that Saddam wanted to get his hands on Kuwait's oil apparently did not occur to Al-Bara Atwan.

I cite these two journalists by way of illustrating the intense level of paranoia and total lack of logic that permeate the Arab mind throughout the Middle East. Apparently nothing that occurs there has anything to do with the intense hatred between Sunnis and Shiites – a hatred that dates back to 632 A.D. when these Islamic factions were formed over the question of who was to be the caliph following the death of Mohammed.

The most recent bombing in Iraq occurred during Ramadan. As the Associated Press reported on July 15, "The pace of the killings has picked up since the Muslim holy month Ramadan began Wednesday, with daily mass-casualty attacks marring what is meant to be a month of charity and peaceful reflections." What better way to celebrate Ramadan than to engage in the murder of fellow Muslims?

"Violence in Iraq has risen to its deadliest level since 2008," reported the AP, "with more than 2,800 people killed since the start of April. The spike in bloodshed is growing increasingly reminiscent of the widespread sectarian killing that peaked in 2006 and 2007, when the country teetered on the brink of civil war."

After being eager to see the U.S. military leave, Ali al-Moussawi, a media advisor to Iraq's Prime Minister Nouri al-Maliki, told the AP in late June that "Baghdad would welcome increased arms sales and faster weapons deliveries, along with U.S. training teams to help it confront rising regional instability and terrorist threats." Much of the violence in Iraq is attributed to its Sunnis. The government there is controlled by Shiites.

"Iraq," the AP reported, "is struggling to contain a resurgent al-Qaeda that is one of the main drivers behind the country's worst uptick in violence in half a decade." Al-Qaeda is a Sunni organization founded by Osama bin Laden. Bin Laden's close associate, Ayman al-Zawahiri, got his start in Egypt's Muslim Brotherhood and is directing al Qaeda's present effort to overthrow Syria's Basher Al-Assad and take over the entire Middle East and the Maghreb, northern Africa's Muslim nations.

President Obama's efforts to put some distance between the U.S. and the turmoil in the Middle East are beginning to look like a good idea. Blood will flow in Iraq, in Syria, in Egypt, in Afghanistan, and anywhere else on the map of that horrid Islamic madhouse. It makes one yearn for the good old days of strong dictators who kept a lid on it.