July 21, 2013
In the former Soviet Union, the joke was "They pretend to pay us and we pretend to work." It took over four decades of the Cold War to finally put an end to the lie that Communism as an economic system works. After the Berlin Wall fell in 1989, the Soviet Union came to an end on December 25, 1991. By then Communism worldwide had killed hundreds of millions of people. 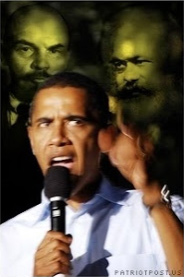 Now, it is true that America is not a Communist nation, but by doggedly pursuing the theories put forth by Karl Marx and Vladimir Lenin, as well as the historically failed theories of Keynes, a British economist who believed that the government must pump money into the economy to keep it afloat, Obama has been trying to turn our Capitalist economy into a Communist one,

Calling our economy "Communist" may seem unduly harsh, but under Obama and his predecessors, the government is in charge of the banking sector, the health and insurance industries, General Motors was nationalized, the government is deeply involved in mortgage lending and now controls student loans. Now stand back and ask if the government – the State – is not now more Communist than Capitalist?

Wedded to failed economic theories, Obama has utterly failed to turn around the economy after the 2008 financial crisis and ensuing recession.

Writing in the August 2012 edition of Forbes magazine, Louis Woodhill said, "If mismanaging an economic recovery were an Olympic event, President Obama would be standing on the middle platform right now, accept the gold medal. Deep recessions are supposed to be followed by strong recoveries, but, under Obama, the worst recession since the 1930s has been followed by the slowest economic recovery in the history of the republic. In a very real sense, there has been no recovery at all – things are still getting worse."

Obama still has three and a half years to make things ever more worse than they are. A Marxist in every sense of the word, Obama is so wedded to his belief in "redistribution" of wealth, that he spent the first term blaming his failed economic policies in George W. Bush and blathering endlessly about "millionaires and billionaires." If the government confiscated all their wealth, it would barely pay for its operation for a month, if that.

The way most people experience a bad economy is whether they are employed or not. The self-employed feel it in reduced income, It is always one of the best indicators of the success or failure of whether things are improving or not.

As of July 2013, the United States has been in 54 straight months with an unemployment rate at 7.5% or higher. As Terrence P. Jeffery, the managing editor of CNSnews, recently noted, it is "the longest stretch of unemployment at or above that rate since 1948, when the Bureau of Labor Statistics (BLS) started calculating the national unemployment rate."

Under normal circumstances, Obama would have been defeated by Bozo the Clown in 2012, but he has had the support of the mainstream media from the day he started campaigning for the presidency. That is a powerful instrument of influence, but there is nothing to say it will continue what Bernard Goldberg called its "slobbering love affair" with Obama.

In June CNSnews reporter Elizabeth Harrington noted that there is still "a near record 89 million Americans not in the labor force." The BLS put the number at 89,705,000 in May. "9.3 million Americans have left the workforce during the presidency of Barack Obama." When broken down into categories, it means that Afro-Americans saw a rise in May to 13.5% or 11,599,000. Even the employer of last resort, the federal government, saw a decline to a mere 20,361,000. In a Communist society, in theory everyone works for the state.

Where the government becomes the source of all good things, it is worth noting that, as of April, the Department of Agriculture reported that a record number of 23 million households in America are now on food stamps. There are, according to the U.S. Census Bureau, 115,310,000 households, meaning that one in five is receiving this government handout.

Virtually everyone knows someone who has lost their job and is searching for a new one., but life under Obama has been especially harsh for the newest generation coming out of high school and college. Generation Opportunity, a non-partisan youth advocacy organization announced its "Millennial Jobs Report" for June, specific to 18-to-29 year olds. With the overall unemployment rate at 7.5%, for this cohort, it is 16.1%!

It is worth keeping in mind that a nation – any nation – with a large group of unemployed youths, the prospects for protests and other problems are a historic fact. They have a lot of energy and no place to apply it. They are also easily manipulated.

In addition to bad economic policies, the government is going all-out to impose thousands of new regulations on all aspects of the economy and our lives. Historian Niall Ferguson, writing in a June edition of The Wall Street Journal, cited the Competitive Enterprise Institute's Clyde Wayne Crews' annual survey of the federal regulatory state, noting that "the 2012 Federal Register – the official directory of regulation – today runs to 78,961 pages. Back in 1986 it was 44,812 pages. In 1936, it was just 2,620."

This is national death by regulation strangulation and the President recently unleashed the Environmental Protection Agency even more by declaring "climate change" is a top priority. The EPA is in the process of killing coal-fired plants responsible for just under 50% of all the electricity we use. It wants to increase the amount of ethanol in our gasoline, damaging our auto's engines at the same time it reduces the mileage they produce.

So, if you think we are still functioning in a free market economy, it is as great an illusion as was Communism in the former Soviet Union. When it was no longer defensible, that nation collapsed and was replaced by a truncated former empire, the Russian federation.

If the United States should face total financial collapse, there will be no real freedom left anywhere in the world. Just as any true Communist would want.