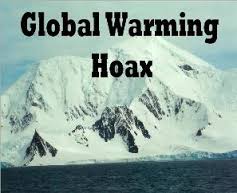 I have always found a stark contrast in the way the forecasts of meteorologists on television and radio are limited in accuracy to about a week and beyond that become more speculative while the claims about global warming are always stated in decades. For example, the polar ice caps were supposed to have all melted by now.

The daily forecasts are formulated based on sophisticated meteorological satellites. The global warming claims are all based on computer models, not empirical observation and data.

I am not a meteorologist, nor even a scientist. I am, however, a science writer who has followed the global warming hoax since it began in the late 1980s and picked up momentum as the UN Intergovernmental Panel on Climate Change (IPCC) began issuing its computer-based doomsday claims.

The IPCC objective was to get nations to impose carbon taxes on "greenhouse gas emissions," mostly carbon dioxide (CO2). Why anyone would want to tax CO2 when it is vital to all life on Earth is a mystery. The claim was that it was trapping heat. The essential flaw in all this scare mongering is that the Earth is an extraordinary self-adjusting mechanism and more CO2 is great news for thriving forests and growing crops.

Two friends of mine, both recognized as major voices in the world of meteorology, Joseph D'Aleo, a certified consulting meteorologist, and Dr. William Gray, were joined by Dr. Neil Frank, another respected member of the profession, in a July 8 letter sent to Keith Seitter, the Executive Director of the American Meteorological Society, these AMS Fellows, took him and the Society to task for continuing to push the bogus assertion that a "consensus" of its members believe that global warming is occurring.

A Wikipedia page notes that the American Meteorological Society was founded in 1919 and "promotes the development and dissemination of information and education in atmospheric and related oceanic and hydrologic science." The Society has a membership of more than 14,000 professionals, professors, students, and weather enthusiasts.

Suffice to say, global warming is the greatest hoax of the modern era and is seriously undermined by the fact that the Earth has been in one of its natural cooling cycles for the last seventeen years at this point.

Even so, D'Aleo, Drs. Frank and Gray, felt compelled to put Seittler on notice. "We know you have used your authority as Executive Director to push the AMS 'climate consensus' position..." noting the way Seittler had worked "to refine the message to help sell the 'consensus' position to the membership and the public."

Since the publication of science papers advances knowledge, blocking them has the opposite effect. "Your editors have slow-walked and thrown up obstacles to paper that challenge the 'consensus' position, often forcing authors to go elsewhere."

"This pattern disturbs us, but there is another development that is even more disconcerting, and that is a campaign of intimidations launched by an advocacy group known as Forecast the Facts. While they claim to be a grass roots organization, the IRS tells us that Forecast the Facts is funded by the Center for American Progress, which is a left-wing advocacy group that has, in turn, been heavily funded by George Soros."

"Forecast the Facts harasses TV stations whenever their meteorologists present a skeptical view on global warming, whether on-air, in blogs, local op-eds, or twitter accounts." For the three men of science this kind of thuggish behavior, combined with the AMS position, has reached a point where they felt compelled to challenge it. It is occurring as the lie that a vast number of scientists support the global warming hoax is "failing miserably" when put forth by the AMS, the IPCC, and two government agencies, the EPA and NOAA.

The meteorological trio pointed out that "global hurricane frequency is at a 30+year low and strong tornado trends are down. There is no long term in droughts and floods. Snow and cold have been increasing in winter, not decreasing as the IPCC and NOAA climate reports have forecasted. We have seen deceleration in sea level rises." The opposite of these facts have been the claims still being made in the name of global warming.

They concluded saying, "We also hope to hear from you that the AMS is not endorsing, or in any way colluding in or supporting, the tactics Forecast the Facts is using to enforce conformity with the official position of the AMS..."

In an August 4 blog post on IceCap.us, D'Aleo's website, he reported on the response he received from Seitter who clearly got the message. "Personally, I do not feel the Forecast the Facts approach is a productive one and I have told them so on several occasions" referring their demand that weather reporters who do not hue to the global warming lies be fired.

D'Aleo's post noted what Michael Crichton said about consensus. "Historically, the claim of consensus has been the first refuge of scoundrels; it is a way to avoid debate by claiming the matter is already settled. Let's be clear: the work of science has nothing whatever to do with consensus. Consensus is the business of politics."

The time is overdue for the American Meteorological Society to abandon any role in advancing a hoax that Mother Nature herself has exposed. Three cheers for these three statesmen of meteorology.