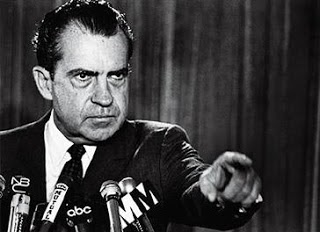 "On August 8 (1974), Richard Milhouse Nixon announced his resignation as of noon the following day, thus avoiding the humiliation of certain impeachment. It was a solemn moment in the life of the nation. The change in leadership took place with no soldiers with fixed bayonets in the streets to keep civil order. The nation accepted the departure of its disgraced president and welcomed his successor peacefully."

This is how Harry Rosenfeld described that day forty years ago in his autobiography, "From Kristallnacht to Watergate: Memoirs of a Newspaperman." For old journalists like myself, the book evokes the long effort to get at the truth behind a June 17, 1972 break-in at the Democratic National Committee headquarters at the Watergate complex. Rosenfeld was the metro editor at The Washington Post at the time.

Many readers were not even born at that time and, for them, it is a useful lesson in the way a combination of tenacious journalism and the wheels of government combined to result in the historic resignation of a president who had won an impressive reelection. Despite the slavish coverage of Barack Obama by much of the nation's mainstream press, the fact remains that the "phony" scandals he wants to dismiss are in the news every day, building a momentum that could lead to his resignation in the face of impeachment.

Watergate unfolded slowly, but its outcome included the indictment, trial, conviction, and incarceration of forty-three persons, among which was Nixon's Attorney General and many of his top staff members and administration officials. Watergate was a singular scandal, but today Obama's presidency is circling the drain with scandals in the Department of State, the Department of Justice, the Internal Revenue Service, and the Federal Election Commission.

Events surrounding the passage of the Affordable Patient Care Act – Obamacare – also demonstrate mounting opposition to Obama's signature legislation and exacerbating all of this is the moribund economy.

When the Senate Watergate Committee issued its final report, its chairman said, "The presidential aides who perpetrated Watergate...were instigated by a lust for political power itself." This could apply to the President and those around him because their disregard for the Constitutional limits on their actions is manifested every day. For example, there is no authority to delay implementation of Obamacare's employer mandate.

The title of Rosenfeld's memoir is a reminder of a grim period of history in the last century, the rise of the Nazi regime in Germany and the subsequent deliberate murder of Europe's Jews in what has come to be known as the Holocaust. Kristallnacht. On November 9, 1938 a coordinated attack on synagogues, Jewish businesses, and Jews in Germany made it abundantly clear that those who had not already left had better do so. The Rosenfeld family, his parents and sister, were among the fortunate to escape.

Rosenfeld's life mirrors journalism from the 1940s to the present. He wanted nothing more than to be a journalist, beginning in a low-level job at New York's Herald Tribune, working not as a copy boy, but in its syndicate department as a shipping clerk. With meticulous detail, Rosenfeld tells of his rise in the profession that included the death of his beloved Tribune and to his editorial positions as foreign news editor for The Washington Post and eventually as its metro editor, a job that included supervising two young reporters, Bob Woodward and Carl Bernstein, who would gain fame for their dogged coverage of the Watergate burglary and subsequent revelations.

As foreign editor, he was able to travel throughout the world, often meeting the leaders of its nations throughout that time. While still at the Tribune, in 1965 he traveled to Jerusalem where he visited "a city divided" in which "the Israelis had erected high, thick concrete barriers to deflect sniper fire from Jordanians in the Old City." Two years later the "Six Day War" would see Israel gain control of Jerusalem, the West Bank, and the Golan Heights.

When the Watergate burglary occurred, Rosenfeld had already enjoyed many years working as a journalist and, in particular, as an editor overseeing the work of journalists. By then he was already widely regarded as one of the best in his profession. He had spotted Woodward as having great promise even though he had no formal journalism training. He also knew that Bernstein had a less than personal stellar reputation, but his instincts were such that he quickly surmised that the break-in was no "third-rate burglary" as the White House press secretary had described it.

"When people say the Post brought down President Nixon," says Rosenfeld, "they are off the mark. He brought himself down."

When the impeachment articles were proposed, they said that Nixon had "brought disgrace and disrespect to the office of the presidency, failed to honor the Constitution of the United States and the laws enacted thereunder, imperiled the civil liberties of the American people, and attempted to undermine the legislative and judicial branches of government, thereby jeopardizing the constitutional system of government in which the people of the United States have placed their trust."

If that sounds a lot like what has been occurring throughout the first and now second term of President Obama, you're right. He is facing the outcome of not one, but several scandals, all continuing to unravel as the weeks turn into months and years. It took two years to put an end to Nixon's presidency and there is every likelihood that we will have to endure more revelations about the rot at the center of his presidency before he too must face justice.