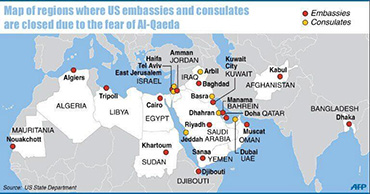 A map of the U.S. embassies and consulates throughout the Middle East and Northern Africa tells you everything need to know about Barack Obama's failed foreign policy. It is worth noting that Britain and France also choose to close many of their diplomatic posts. The West which has had a long history of coveting and controlling elements of the Middle East and the African continent is in retreat.

It is historic and it speaks to the shrinking of their power to intervene and influence events in this vast region of the world. It is also so dangerous that contemplating the outcome is frightening.

Despite President Obama's belief that "all wars have to come to an end," the reality is that we are locked into a long war with the forces of Islamism, the most dangerous threat to civilization the world has seen since the last century.

As we have learned, al Qaeda is not "on the run" even if bin Laden is dead. His close associate, Ayman al-Zawahiri, formerly associated with the Muslim Brotherhood, is very much alive and there appears to be an entire new generation of Muslims who have taken up the flag to wage war on the West and to conquer Middle Eastern nations run by a variety of despots and monarchs.

These wars have been going on for a long time. They date back to the establishment of al Qaeda in the 1980s and the Muslim Brotherhood in 1928. I suspect the closing of U.S. embassies as Ramadan ends is going to become a standard precaution in the years ahead.

Algeria faced the Islamist threat from 1991 to 2002 and its military was engaged in a bloody conflict with tens of thousands of casualties until the Islamists surrendered. Today it is Syria that is slaughtering its own dissidents along with a flow of Islamists from the region that include Hezbollah out of Lebanon, fighters out of Chechnya, and military assistance from Iran, among others.

President Obama actually thought he could personally reset the relations between the U.S. and Muslim nations, but he was either delusional and/or a poor student of history. No doubt he assumed that the national weariness with wars in Iraq and Afghanistan would make it easy to pull out our military forces without any serious consequences. However, this was interpreted as weakness by Islamists and rightly so.

What is surprising and disturbing is that our intelligence agencies and advisors to the President have been so wrong, so consistently. Al Qaeda and other elements of the Islamist movement are not on the run; they are growing in strength and reach.

Like Democrat Presidents before him Carter and Clinton, Obama has engaged in hollowing out the U.S. military, leaving the nation at greater peril in an always dangerous world.

It could be that leaders in the West have concluded that the reach of al Qaeda and related Islamist groups is so vast that it is too costly to maintain the force levels in the Middle East and elsewhere to project power and influence events. Two U.S. carrier groups used to be stationed in the Persian Gulf. Now there is one.

The swiftness with which former dictators in Tunisia, Libya, and Egypt were overthrown no doubt took the West by surprise. The ability of the Syrian regime to hold out in its civil war is another example. The military forces in Middle Eastern nations hold the key to the future and they will determine what it will be.

The good news is that there are secular Muslims in the Middle East that do not want to live under Sharia law. The bad news is that they are not organized and Islamists have no problem with killing them. This is a struggle that will play out very slowly.

Meanwhile, the West has been sidelined. It is now a spectator, not a shaper of the outcome.