The President who, in 2009, said he thought it unseemly to "meddle" in the affairs of Iran when protesters against its regime were being shot dead in the streets of Tehran, announced to the world on August 15, 2013 that he was angered by the killing of civilians in the streets of Cairo as the Muslim Brotherhood was busy burning Christian churches and homes when they weren't firing on the Egyptian military that was attempting to end its efforts to impose Sharia rule.

Egypt may be thousands of miles away but the intent of the Muslim Brotherhood (MB) to destroy America and, of course, Israel is close to home as the President and his national security advisors have misled Americans as to the true intent and threat of the MB.

In his new book, "The Brotherhood: America's Next Great Enemy," Erick Stakelbeck reminds the reader that in February 2011, "the Obama administration's Director of National Intelligence, James Clapper, portray(ed) the Brotherhood as an Egyptian version of the Peace Corps." At the time the "Arab Spring" protests were in full swing and Egyptian President Hosni Mubarak was on the verge of being overthrown. Clapper described the MB as a "largely secular" organization that has "pursued social ends" and a "betterment of the political order." This was and is utter nonsense, a deception.

Clapper is rivaled in his ignorance of Islam by the current Director of the CIA, John Brennan, who is a well-known fan of Arabs and Islam. He routinely refers to Jerusalem by its Arabic name "Al-Quds" and has called jihad "a legitimate tenet of Islam," extolling Islam as a faith of "peace and tolerance," of "goodness and beauty"," that has "shaped (his) own worldview."

The fact is that the Brotherhood has been repeatedly banned in Egypt, starting in 1948. In 1954 the MB tried to assassinate then-president Nasser and, as Stakelbeck notes, "The Brotherhood would be severely repressed in Egypt for most of the next five decades." So even in a Muslim nation, the threat the MB represented was understood.

The battles in the streets of Cairo, Alexandria, and other Egyptian cities reflect the ultimate intent of Islam to dominate the governance of the Middle East and to establish a global caliphate. It is doubtful that most Americans realize the threat it poses more than a decade past 9/11.

For reasons that historians will puzzle over for years to come, Americans elected, not just the first black President in 2008 and, despite a record of foreign and domestic policy failure, reelected him in 2012. They elected a man who makes no effort to hide his deep sympathy and support of Islam.

During his June 2009 speech in Cairo, President Obama, the son of a Muslim and adopted son of a Muslim who had spent four years of his youth in Indonesia, an Islamic nation, had attended an Islamic school and even gone to prayers at a mosque, said "I consider it part of my responsibility as President of the United States of America to fight against negative stereotypes of Islam wherever they appear." 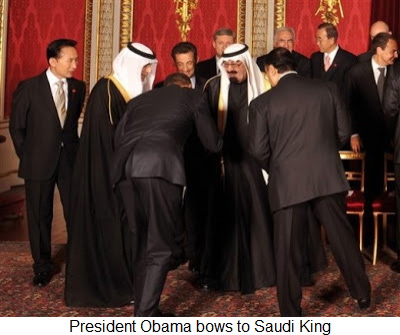 Stakelbeck noted that "The Obama administration reportedly "insisted" that "at least ten Muslim Brothers (who were then in opposition to the Mubarak regime) be allowed to attend the speech." Earlier, in January 2009, Obama gave his first formal interview as President to the Arabic-language network Al-Arabiya and, as we all know, in April 2009 at the G-20 Summit in London, the President of the United States bowed to King Abdullah of Saudi Arabia "as other Western leaders looked on in shock."

Earlier, Stakelbeck had described "the bow" as a "shameless act of groveling, performed in one of his first forays onto the international stage" that "signaled that debasing America and exalting Islam would be key elements in achieving his oft-stated goal of improving America's image in the Muslim world." We are all witness to how well that has worked out.

"Just thirteen days after Islamic jihadists murdered four Americans in Benghazi; the president stood before the world's leaders" at the UN General Assembly on September 25, 2012, "and uttered the now-infamous line: 'The future must not belong to those who slander the prophet of Islam.'"

Founded in 1928 the Muslim Brotherhood is defined by its hatred of the West and of Jews. Stakelbeck warns that "The MB's much-deserved reputation for violence, radicalism, anti-Americanism, and anti-Semitism is rapidly disappearing in the Age of Obama" and that is why the struggle for a modern Egypt being fought there against the MB requires the full support of the United States as its military strives to drive its members and supporters from its streets. Obama's response has been to take time from playing golf to denounce the current interim government that removed Muhammad Morsi from office.

What do you need to know about the Muslim Brotherhood? Consider its motto: "Allah is our objective. The Prophet is our leader. Qur'an is our law. Jihad is our way. Dying in the way of Allah is our highest hope." It is devoted to imposing Sharia law on the world, a barbaric system that promotes beheadings, stoning, discrimination against women and other religions.

"The Muslim Brotherhood," notes Stakelbeck, "is now present in at least eighty countries, and according to one longtime Brotherhood leaders, boasts some 100 million adherents worldwide."

It has long been active in the United States through a web of front organizations. 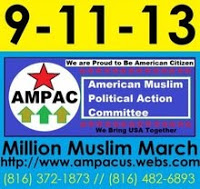 A demonstration of its utter contempt for America is a planned "Million Muslim March: in Washington, D.C. on September 11 by the American Political Action Committee "to demand social justice by the U.S. government," claiming that Muslims "continue 12 years later to be victimized by being made the villains."

Despite 9/11, despite the murder spree by Major Nidal Hasan of solders at Fort Hood, and despite the Boston Marathon bombing, militant Muslims in America such as AMPAC's spokesman, Isa Hodge, are claiming that "our government either sits idly by and does nothing to protect our freedoms or it exacerbates the problem with its constant war on terrorism in Islamic countries..." adding "These lies told to the American population have made it impossible for us to do true Dawa," the practice of proselytizing or preaching Islam.

On September 11 in the nation's capital, the lies Hodge has spoken will be repeated. Within them is hidden the greatest threat to the nation and the West, to Christians, Jews, and other "unbelievers."

Stakelbeck warns that "We've neutered ourselves as a society and succumbed completely to a suicidal brand of political correctness imposed by the leftist gatekeepers of the media, the government, and academia. We've also just about dumbed ourselves down to the point of no return. And the Brothers know it."

The threat that the Muslim Brotherhood, al Qaeda, and militant Islam poses will be like the smoke from an incipient forest fire wafting through the nation's capital on September 11. Actual fires are burning in Egypt these days and our enemies live and walk among us.