Alan Caruba
I am tired of being called a white racist 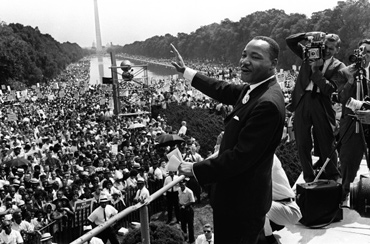 I don't know when it occurred to me that I had gone from having shaken hands with Dr. Martin Luther King, Jr. to being called a white racist, but apparently I was not paying attention.

Neither were a lot of others of my generation who had welcomed and supported the Civil Rights movement only to discover we were not going to hear a word of thanks. Younger generations have suffered the same indignity.

On Saturday, August 24, the NAACP is sponsoring a march in Washington, D.C. to commemorate the fiftieth anniversary of Dr. King's famed "I have a dream" speech given on August 28, 1963. One wonders if the first black President of the United States will put in an appearance, but the White House did not have anything scheduled on its website.

The whole nation went through the trial of George Zimmerman, the "white" Hispanic who shot Trayvon Martin, apparently the epitome of the virtues of black youth despite having been suspended from school several times and guilty of infractions that often put others his age in jail. Had Zimmerman not shot him, Trayvon would surely have gone to jail for assaulting him.

I have heard all the sociological explanations about blacks and the criminal justice system. I am concerned that too many within the nation's "African-American" population simply do not grow up with or absorb "white" attitudes about staying in school, getting a job, and raising a family; not all, but not enough.

To all the blacks who stayed in school, went to college, married and are raising a family in the suburbs, my apologies for seeming to lump you in with those who did not and thank you for not adopting victimhood as your mantra.

There is good news about blacks in America. U.S. Census statistics as of 2010 counted 2.4 million black military veterans that year. In 2010, 82% of blacks 25 and older had a high school diploma or higher degree. Indeed, 18% of that cohort had a bachelor's degree or higher, and 1.5 million had an advanced degree. In 2010, there were 2.9 million blacks enrolled in college, an increase of 1.7 million since 1990.

And then there is the bad news. Blacks represent 13% of the population, but according to a fact sheet of the National Association for the Advancement of Colored People, blacks "now constitute nearly one million of the total 2.3 million" Americans behind bars.

In New York City, the successful "stop and frisk" police procedure has been deemed prejudicial by a judge who ordered that it be stopped. It is prejudicial if you parse the word and find it means to "pre-judge" an individual or situation that you may deem a potential danger.

Everyone profiles everyone else all the time.

The NAACP's super sensitivity about the one HALF of the President's racial identity that is black was recently demonstrated when a rodeo clown donned an Obama mask as part of entertaining the crowd. This device, using presidential masks, has been commonplace for decades, but the particular incident had the Missouri NAACP demanding that the Secret Service and other law enforcement agencies investigate it as a "hate crime." The President hasn't spoken a word about this absurd charge.

Indeed, in 2008 when Obama was first elected, we were all assured that the nation was entering a "post racial" period in which whites and blacks would join hands and put the past behind them. Despite the growth of the black middle class and other examples of the benefits that flowed from the 1964 Civil Rights Act and other protections, the ugly truth is that too many blacks seem trapped in a 1960's time warp with the same accusations and resentments still being expressed.

How much progress has been made?

Since the Zimmerman trial it is now common knowledge that 97% of the murders of blacks are by other blacks. Less known are the many black-on-white attacks that occur routinely throughout the nation. Colin Flaherty has been making news ever since he published "White Girl Bleed a Lot." He continues to document this vastly under-reported problem. Thomas Sowell, writing in the National Review, said "Reading Colin Flaherty's book made painfully clear to me that the magnitude of this problem is greater than I had discovered from my own research. He documents both the race riots and the media and political evasions in dozens of cities."

Speaking solely for myself I am extremely disappointed by the failure of too many black Americans to simply admit that there is something terribly wrong in a community that has too many abortions, too many fatherless children, too much exploitation of welfare systems, too much drug use and trafficking, and too much blame on white racism for these and other ills.

Instead of seeing evidence that the black community in America is mounting an effort to address its problems what I and others see and hear are the same tired race hustlers, Al Sharpton, Jesse Jackson, and others, spewing the same "blame whitey" rhetoric.

It needs to be said that racism cuts both ways, but too much black racism gets a pass. Whites are not to blame at this point. One hopes the Saturday march in D.C. will reflect Dr. King's generous and hopeful speech of fifty years ago. I doubt that will happen.