Alan Caruba
Why the GOP lost and how it can win 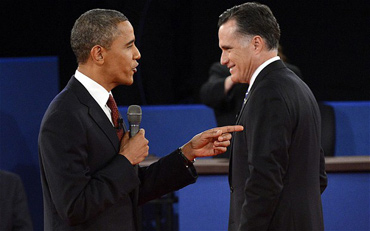 Throughout the 2012 political campaign, I was nagged by the feeling that Mitt Romney was "too nice" and said so, despite having supported him during the primaries. I kept waiting for him to wage an aggressive campaign, but it never happened. For the second time in a row, the GOP had selected a "me too" Republican more eager to demonstrate that he had much in common with Obama and the Democrats than with the core values of the party; smaller government, lower taxes, reducing the debt, and less regulation.

The first term of Barack Obama began with the "stimulus" that added trillions to the national debt and had produced no" shovel ready" or permanent jobs. The unemployment rate remained an example of an economy that barely showed signs of improvement. Welfare programs such as food stamps that added one out of every five families to their roles increased dependency on the government, and Obamacare was already proving to be a huge legislative disaster with consequences that killed jobs and was resisted by many states. The term ended with the scandal of the terrorist attack on Benghazi that killed a U.S. ambassador and three others.

If history was a guide, Obama should have been a one-term president just as was Jimmy Carter. What happened, however, as Jerome Corsi, Ph.D. brilliantly demonstrates in "What Went Wrong: The Inside Story of the GOP Debacle of 2012 and How it can be Avoided Next time" ($25.95, WND Books) was the defeat of Mitt Romney when, it turned out, a significant portion of the GOP base of white voters stayed home.

"In 2012, the true enthusiasm gap was a Republican problem," says Corsi, noting also that "Roughly one-third of the U.S. population now receives aid from at least one means-tested welfare program each month, with average benefits estimated at approximately $9,000 per recipient." The Democratic Party had successfully bribed large components of the voting population with programs that had also been expanded in previous Republican administrations, most notably George W. Bush's, a "compassionate conservative," a me-too Republican.

Sean Trenda, a senior election analyst at Real Clean Politics, estimated that "in 2012, minority voting increased by about 2 million voters from 2008, but white voters disappeared from the polls to the tune of nearly 7 million 'missing' voters."

The campaign that reelected Obama was greatly aided by computer analysis of potential voters that identified who they were, what message would best influence them, where they lived, and a ground game that ensured they got to the polls. The GOP ground game utterly failed on election day in 2012.

In addition to the "African Americans who almost universally vote for Obama" (93%) the Democrats capitalized on a new Democratic majority coalition that included "Hispanics looking for citizenship and economic advancement, single women and radical feminists concerned about advancing against men in the workplace and managing the needs of childbearing without a husband, union workers, and especially government union workers who cling to the Democratic Party fearing the labor movement is fading into irrelevancy; and youths of the Millennial generation coming of voting age, desperately concerned that they will not be able to pay off student loans or find employment equal to their level of education."

"All these groups look to big government to set the regulatory table unfairly in their advantage and to pay them generously from the public treasury to compensate for their economic plight," says Corsi

The irony is that that their economic plight is the direct result of the Democratic Party's an Obama's policies throughout the years. They have been victimized by these policies, but fearful of losing their government handouts.

"By campaigning on themes of class conflict," says Corsi, "Obama divided further an already divided nation in which nearly half pay no income tax, yet receive ample government-funded social welfare from a complex of entitlement programs even FDR and LBJ would have found dazzling."

Obama's charisma that carried him to victory in 2008 over John McCain had begun to fade, but he became a celebrity president "more comfortable dancing on television with Ellen DeGeneres or trading quips with Jay Leno on late-night television than debating face-to-face with a presidential challenger."

In 2014 and 2016 Obama will not be on the ticket. In 2010, when he was, Republicans captured a majority in the House of Representatives and, if the Republican elites that control the party can overcome their disdain for the Tea Party and candidates that demonstrate real conservative values and advocate real conservative programs to turn the nation around, they party may well regain political power in Congress and the White House.

If the Republican establishment can draw the proper lessons from their defeats and grasp the changes that have taken place in the nation's demography. The utter failure of Karl Rove's waste of more than $300 million in campaign funds shocked major contributors and their ability to change, to support serious conservative candidates, can turn things around.

"Obama's reelection," says Corsi, "may well mark a turning point where the majority of American voters realize runaway spending – with entitlement programs now consuming 60 percent of the federal budget and growing – is leading American into fiscal crisis. The Tea Party prefigures the development of a tax revolt and the demand for a return to smaller, constitutional government."

In other words, if life in America gets worse over the remaining years of Obama's final term, voters may just conclude that a strong conservative Republican ticket will produce the kind of change that is needed to save the nation.