Alan Caruba
The Middle East's peace of the grave 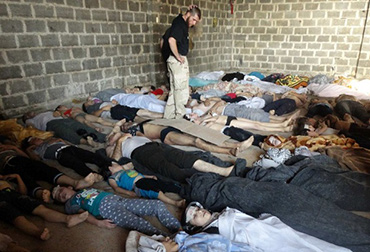 After both great wars of the last century nations got together to create organizations that would ensure that large conflicts would not occur again.

After World War I, it was the League of Nations. When Woodrow Wilson (who was reelected in 1916 after promising to keep the U.S. out of the war in Europe) tried to get the U.S. to sign on, membership in the League was rejected by Congress in the interest of retaining our national sovereignty. The Versailles Treaty that followed the defeat of Germany also set in motion all the elements of that led to World War II and the creation of colonies, new nation-states, in the Middle East by the French and English after the fall of the Ottoman Empire.

Even as World War II was winding down, Franklin D. Roosevelt had work begun on the creation of the United Nations.

In 2007, in response to a question from New York Times' editors, then Senator Barack Obama explained how he would resolve the problems in Syria. "I would meet directly with Syrian leaders. We would engage in a level of aggressive personal diplomacy in which a whole host of issues are on the table...Iran and Syria would start changing their behavior if they started seeing that they had some incentives to do so, but right now the only incentive that exists is our president (Bush) suggesting that if you do what we tell you, we may not blow you up."

"My belief about the regional powers in the Middle East is that they don't respond well to that kind of bluster. They haven't in the past, there's no reason to think they will in the future."

So, naturally, the President is currently threatening Syria's Bashar al-Assad with military action and, having decided to let Congress determine whether he should be granted permission to proceed, may be deterred if it votes to deny it.

George W. Bush invaded Iraq in 2003 after putting together a "coalition of the willing" and going to the United Nations to secure a resolution permitting that action. His Secretary of State, Colin Powell, made a presentation to the Security Council in which he presented proof that Saddam Hussein had weapons of mass destruction. Obama's Secretary of State has argued forcefully for U.S. intervention in Syria to rid the nation of Assad, but America currently has no international support, including longtime ally Great Britain.

Bush's intervention in Iraq, March 2003 to April 2009, led to casualties whose estimates range from 110,600 by the Associated Press to more than a million by the Opinion Research Business Survey. The intervention in Libya in 2011 had estimates of casualties of protesters, armed belligerents, and civilians ranging from 2,000 to 30,000.

Even a "limited" military action in Syria would inflict more casualties, adding to the 100,000 that Assad has already slaughtered and is likely to expand the war into Lebanon, home to Iran's proxy, Hezbollah, as well as Jordan and possibly Turkey. Americans are telling their representatives in Congress not to engage our military.

Writing in The Weekly Standard on September 6, Reuel Marc Gherecht, a senior fellow at the Foundation for the Defense of Democracies and a contributing editor, dissected the problems posed by Syria and Iran, along with al Qaeda. "When it comes to the Middle East, Obama's presidency has largely been predicated on two ideas: A hegemonic America is a bad thing, and the second Iraq war was a serious mistake."

"Time has been unkind to Obama," said Gherecht. "The withdrawal from Iraq has not left that country better off...al Qaeda now boasts, along with Iran and its militant Iraqi allies, that it drove the Americans out of the country." Hardly a week has gone by since American military forces left that bombs by Sunni militants have not killed Shiite Iraqis.

In Syria, as Assad's forces have been unable to quell the rebellion, he has turned to the use of poison gas.

In Egypt, Obama originally backed the Muslim Brotherhood's overthrow of Hosni Mubarak and in Syria in August 2011 he had told Assad he had to go. It took action by the Egyptian military to remove the government led by the Muslim Brotherhood. Libya remains in a chaotic state between its tribal factions. The civil war in Syria rages on.

"Barack Obama," says Gherecht, "is now the American everyone in the region loves to hate."

Worse than that, warning of the need to intercede in Syria, he said "That so many in the West don't see this, and are unwilling to go to war to stop such an atrocity – to send a clear signal to tyrants elsewhere – only shows how far we've come since 9/11. The Middle East's power politics have again, hit us head on. We are, perhaps, too 'fatigued' this time round for the challenge."

The only peace in the Middle East is the peace of the grave and the region threatens to erupt into a wider conflagration in much the same way World War II followed in the wake of the World War I.

International organizations, the United Nations, the European Union, NATO, the Arab League, and others have proven themselves incapable of a diplomatic resolution to the self-interest of Middle East dictators and monarchies, and the growing tide of Islamic fanaticism.

Barack Obama, with his pathological narcissism, believed that his Muslim upbringing and his Marxist ideology held the key to bringing peace to the Middle East. He has been proven wrong in the same way his domestic policies are bankrupting America and his foreign policies are dragging it into a war he desperately wanted to avoid and now feels compelled to pursue.