Alan Caruba
Why we will not invade Syria 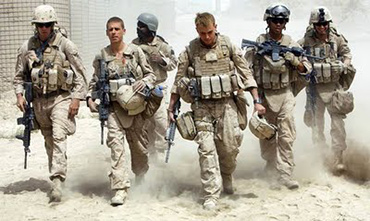 All the recent talk about a proposed and then-delayed attack on Basher Assad's Syria has not included our recent experience in Iraq. We invaded in 2003 and within a month were in Baghdad. It was not a victory. It was the beginning of a long, drawn-out defeat that ended with the withdrawal of our troops and the current chaos that is probably killing as many or more Iraqis than before we invaded.

Earlier we had invaded Afghanistan in response to the attack now called 9/11. We went in and swiftly drove the Taliban and al Qaeda out of the areas from which we have been told they planned the attack. And then we stayed. We are still there.

Largely unspoken is the fact that the members of our standing army have gone back on repeated tours of duty because we did not having a large enough standing army to invade and then control either nation, both of which represent large areas of terrain. We did not have a large enough army because the nation, after Vietnam, abandoned the role of the citizen-soldier and the draft. We had a professional army of volunteers. The army that fought in Vietnam was composed of citizen-soldiers and we lost over 53,000 of them because we had inserted ourselves into a civil war.

It is a civil war that is being fought in Syria and, apparently, we have learned nothing from the wars in which we have engaged since the late 1960s to the present day. We no longer know how to win a war. Instead we are led to believe to precision instruments of war such as Tomahawk missiles are sufficient to alter facts on the ground.

I was moved to think about this while listening to a Q&A session broadcast on C-SPAN, an interview with Andrew Bacevich, Jr., the author of "Breach of Trust: How America Failed its Soldiers and its Society" and a number of other books critical of America's policies regarding its military. Bacevich who teaches as Boston University is a West Point graduate who served for 23 years in the army. He had seen action as a young lieutenant in Vietnam, came back and picked up a graduate degree courtesy of the army. He was a man more at home in academia than the service, staying on, he said, because he had a growing family. His son would serve and die in Iraq.

In retrospect, the expectations of the politicians who took us into Vietnam and then into the military engagements in the Middle East were, Bacevich concluded, "naïve." Those making the decisions had no military background or experience. When four-star General Eric Shinseki famously responded to a question about how many troops would be needed to secure Iraq and said it would need to be on the order of several hundred thousand, it was widely believed he was forced into retirement by the "neocons" who surrounded and advised George W. Bush.

Only President Eisenhower really knew what it would take to fight and win a war. He had commanded the European theatre in World War II. The presidents that followed him into office had served in the military, from Kennedy through Carter, but not in high positions. Reagan, too, had served, but mostly for his acting talents in training films. Clinton was a draft dodger. Bush41 and Bush43 wore the uniform, the former in WWII, the latter in the Texas Air National Guard. By contrast, President Obama was a Boy Scout in Indonesia and has cut the military budget for all five years he's been in office.

When national service was severed with the ending of the draft, Americans lost personal contact with the wars we fought. They were fought in far-off lands for often dubious reasons such as Johnson's belief during the Cold War that the loss of Vietnam to communism would lead to other south Asian nations adopting communism. Bush 41 had to drive Saddam Hussein out of Kuwait in 1990 and, having done so, brought the troops home. Bush 43 believed that deposing Saddam would lead to Iraq adopting democracy. We have learned that you cannot export democracy at the point of a gun or as if it were something that could be unpacked and easily applied to a nation composed of conflicting groups of Muslims, tribes and sects.

We cannot go to war in Syria because we lack the personnel it would require, because it is a civil war, because we lack any kind of strategy there or in the Middle East. Indeed, we are widely disliked and distrusted throughout the Middle East at this point because the Obama administration is understandably seen as weak and feckless.

We have the misfortune of being led by a president without a knowledge of history, with a deep disdain for the military, and who demonstrated he has no idea how to deal with the situation in Syria. Nothing we have done there or may be doing in Libya has resulted in a good outcome. Egypt has been bailed out by Saudi Arabia, but an ally of many decades has learned to distrust Obama.

Obama was rescued from complete ignominy by none other than Russia's president Putin who then took the opportunity to mock him on the pages of The New York Times. The likelihood that any of the chemical and/or biological weapons in Syria will ever be removed any time soon is zero. It would have to be done during a shooting war and that is just not going to happen. Destroying such weapons would, in any event, take years to accomplish.

The era of just lobbing a few missiles into a far-off nation is over. It is a sign of weakness, not strength. The potential for a unified response to the Middle East chaos has diminished as neither NATO nor other international organizations wish to intercede. The United Nations is a pit of useless criminal indifference.

We will not invade Syria. We will malinger on the sidelines with the rest of the world.