Alan Caruba
Win some, lose some 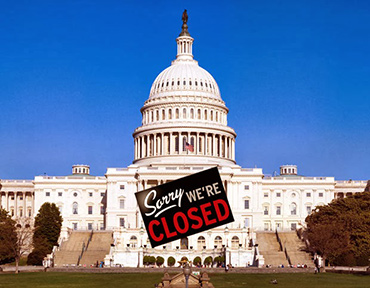 Here are some of the links on the Friday, October 11 Drudge Report:

In politics you win some and you lose som. If the Drudge Report links cited above are any indication, the White House, the Congress, the Republicans and the Democrats are all on the losing side of public opinion. They have lost the confidence of the people no matter what side of the publical spectrum they're on.

As the Wall Street Journal's sagacious columnist, Kim Strassel, noted in the Friday edition "For months now, the GOP has been held hostage by a faction of its party that deluded itself into believing President Obama might be rolled on his signature health-care law. Witness now an equally grand delusion on the Democratic side, one that President Obama nurtures at his peril"

"According to Democrats, their steadfast refusal to negotiate on the government shutdown or the debt ceiling is rooted in a belief that now is the moment to "break" the GOP "fever." Democrats are furious that Republicans today use every Washington deadline to extract a spending concession – and insist they must be broken of that habit."

What we are witnessing is the collision of two different political delusions, one held by the Tea Party wing of the Republican Party that President Obama could be moved to accept any changes – other than those he arbitrarily and unilaterally makes – to Obamacare and the other by the Far Left of the Democrat Party that Obamacare, the Valhalla of its decades-long dream of universal healthcare can work without destroying the finest healthcare system and taking the economy down with it.

Those who lived through the Great Depression often refer to those times as "feeling tired all the time." That's a good description of the psychological condition of depression as well. After five years of President Obama, a lot of people just feel too tired to fight. By mid-afternoon on Friday it was clear that the trucker protest was not going to be the big event that its organizers anticipated. "Truckers Ride for the Constitution" may or may not pick up some more participants, but it will be far less than the 10,000 hoped for.

One has to wonder how many veterans will show up for the October 13 protest that is planned. The ones who tossed the barricades aside at the World War II Memorial on the National Mall may have done more to express the public's exasperation with the government shutdown as any mass protest.

The curious aspect of the shutdown is how the blame keeps shifting back and forth between the President and the Republicans in the House. The shutdown has come about from the demand of the Republican leadership that the White House make some concessions to reduce the spending and borrowing that has produced a $17 trillion debt. This has been tied to the looming October 17 deadline that the Treasury says the debt ceiling must be raised or the nation will default.

That claim is bogus. The government takes in billions every week, enough to meet its obligation to pay the interest on the treasury notes it has sold by way of borrowing to pay to maintain programs that are astonishingly wasteful, either from fraud or the compulsion to give taxpayer's money away. The Republicans know this. The Democrats know this.

The President has been insisting for days that he would not negotiate. Well, we all knew he would not negotiate anything regarding Obamacare, including something sensible like delaying its implementation for a year. He already gave a delay to Big Business. How about the rest of the population?

So, both have played a role in the shutdown given the fact that negotiation, compromise, is the way our government is designed to function.

This isn't "politics as usual." This is one part of the government, the House of Representatives, doing what the Constitution says it must, overseeing the expenditure of every last penny the government spends. And it is two other parts, the Senate and the White House, controlled by the Democratic Party, refusing to compromise.

It is the American people waking up to discover that (1) President Obama is content to inflict as much pain as possible on them and (2) that a frayed and divided Republican Party cannot, will not hold firm to secure some protection against Obamacare and a reduction in government spending.

At this writing, the biggest losers will be the American people. Well, at least those who do not work for the government and live outside the Beltway.