Alan Caruba
Get used to it 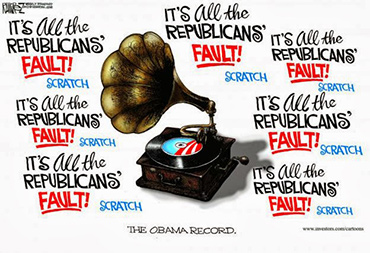 Oh, what a relief! Now we know that the government will be funded through January 15 and that we can wait until February 7 to fight the debt ceiling battle all over again. Three months to the next potential shutdown and four until the Democrats and Republicans go to the mattresses again like a scene from The Godfather.

Only idiots would run a government with a $17 trillion debt this way.

Politico.com reported that "President Barack Obama welcomed the end of the government shutdown and the raising of the debt limit Thursday with a call for the end of crisis-to-crisis governing and a new era of bipartisan cooperation."

Does anyone still believe anything Obama says?

The deal struck between Sens. Reid (R-NV) and McConnell (D-KY) allowed the latter to secure $2 billion for a project in Kentucky and no doubt there is plenty of pork in the bill to keep everyone happy, except for those senators who weren't able to get a piece of the bribe money.

"There is no distinctly criminal class," said Mark Twain, "except Congress."

What have we learned from the last three weeks? We learned that President Obama has no intention to negotiate with the Republicans and regards the Democrats in Congress as little more than rubber stamps for whatever he wants. And they seem to agree. While the Democrats showed considerable solidarity, the Republicans were tearing themselves to tatters.

We learned that President Obama, with an eye on the November 2014 midterm elections, is already in full battle mode as he and his huge propaganda machine – the media and the former campaign committee-turned-social-media-megaphone – ramp up the message that the Tea Party is composed of rightwing fanatics and the Republicans are not much better.

Given the great "success" of Obamacare, can you imagine spending the last two years of Obama's time in office if he is able to so demonize the Republicans that they lose control of the House and cannot gain control or at least a larger margin of members in the Senate?

I jest, of course. Obamacare is the greatest gift ever handed to the Republicans.

As millions of Americans discover that their health insurance premiums have increased 100% to 300%, they will be howling for its repeal by November 2014. The younger, healthier members of society will elect to pay the fine for not signing up. Some people will discover they cannot be admitted to the hospital of their choice or that their personal physician has retired or closed their practice. Others will find their fulltime jobs reduced to part-time, if they haven't already.

There are going to be a lot of very unhappy voters by the time the midterms roll around and that, ladies and gents, is why the Republicans "caved" this time and will likely do so again because I have a feeling that their strategy will be to fight a lot of small, but losing battles around the various deadlines required to fund the government and lift the debt ceiling. Each time they do the latter, they will remind everyone that Obama keeps demanding more money.

As for Rep. John Boehner, Speaker of the House, he was greeted with a round of applause by the Republican caucus when he announced the deal to end the shutdown and raise the debt ceiling. It wasn't that they hadn't lost, but that they understood he had fought their battle with dignity and as far as he could, given the lack of unity among GOP House members.

The memory of World War Two and Vietnam veterans, as well as others from more recent conflicts being denied access to their memorials on the National Mall or of the first closure of the Lincoln Memorial ever is going to linger. Barricades have now been renamed "Barrycades."

The President has managed to offend veterans, the elderly (who vote in larger numbers), the unions who hate Obamacare, Catholics, and a younger generation already saddled with debt from college who are being told they must dig deeper to pay for health insurance they don't want and probably don't need.

Obamacare is profoundly unconstitutional. Forget about the Supreme Court's idiotic decision to call a penalty a "tax" and ignore the other elements of the Constitution that forbid the government from requiring people to pay for health insurance or pay a fine if they do not. The Court has made similar bad decisions in the past and, as some current scholars believe, has become so politicized that it has been eviscerating the clear intent of the Constitution for decades.

Only significant Republican victories in the midterm elections will end the misery being inflicted on Americans. That is likely to occur in spite of the GOP's poor messaging and the hostility of the nation's mainstream media.

Taxpayers and voters are in for months of gridlock on Capitol Hill. Get used to it.