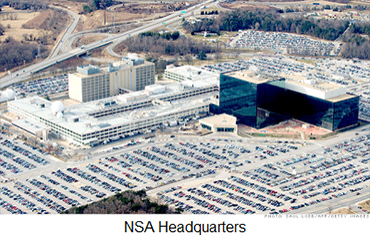 With all the dramatics by Germany, Argentina, and the leaders of other nations protesting that the National Security Agency is spying on them, the experts on espionage have been patiently pointing out that all nations spy on one another and always have. Two thousand years ago Sun Tzu, a Chinese general, wrote "The Art of War" and devoted a chapter to "The Use of Spies" in which he said, "Be subtle! Be subtle! And use your spies for every kind of business."

I often visit "Stormbringer," a blog by a former U.S. soldier with an extensive special operations background, and he recently published "Rules for Spies" by John Schindler, "a National Security Agency veteran and now a professor at the Naval War College." Schindler spent ten years at the NSA as an analyst and counterintelligence officer.

Most of us will never know what really goes on in the NSA and that's the way it's supposed to be, but I will raise a personal objection to its use to spy on Americans. As I understand it, the NSA is authorized solely to spy on foreign subjects, as is the CIA. Domestic surveillance is the job of the FBI. Clearly the lines of legal authority have been breached. One can only hope that congressional oversight will correct this problem.

In the meantime, here is a selection from Rules for Spies that will provide some insight regarding the way espionage and counter-intelligence should be conducted:

"All important intelligence methods have already been perfected by the Russians. We need to figure out how to do them nicely."

"U.S. intelligence is the world's BIG DAWG, especially in SIGNINT (signals intelligence) and IMINT (image intelligence, i.e, that gathered by satellites and other means) but the bureaucracy is so vast as to undercut too much of that."

"SIGNINT is the golden source, but if the enemy doesn't understand his own system, neither will you. If you don't understand the other side's collection and what he's doing to mess up your collection, you're clueless too."

"The bigger your bureaucracy, the less effective your intelligence system is. No exceptions."

"You can learn tradecraft. You can't learn common sense. Nor can you get 'up to speed' on a problem in a couple of weeks."

"Intelligence services are accurate reflections of their societies. It's not always a pretty picture."

"The best way to protect your secrets is to steal the other side's."

"If you don't own the street, the other side will. And soon they will steal your lunch."

Schindler's reflections on bureaucracy and the way it can undermine or misinterpret intelligence are of particular importance in the present time. The U.S. not only has the largest intelligence gathering operation on planet Earth, but its size can contribute to failures to analyze and act on it.

Examples of this would include, of course, the 9/11 attack that transformed America in major ways. Despite a huge Homeland Security Department, created in the wake of 9/11, and the existence of the FBI, NSA and the CIA, none of that vast structure deterred the Boston Marathon massacre last year, despite intelligence passed along by the Russians regarding the brothers who perpetrated it.

Examples of this would include, of course, the 9/11 attack that transformed America in major ways. Despite a huge Homeland Security Department, created in the wake of 9/11, and the existence of the FBI, NSA and the CIA, none of that vast structure deterred the Boston Marathon massacre last year, despite intelligence passed along by the Russians regarding the brothers who perpetrated it.

The most worrisome aspect of all the intelligence gathering is the capacity of a those in positions of leadership in America to use it against Americans who are simply exercising their First Amendment rights.

Recently, as reported in The Washington Times, "Maryland State Police and federal agents used a search warrant in an unrelated criminal investigation to seize the private reporting files of an award-winning former investigated journalist," Audrey Hudson, "who had exposed problems in the Homeland Security Department's federal air marshal service." The documents revealed her sources within the department. The Times is "preparing legal action to fight what it called an unwarranted intrusion on the First Amendment." The seizure is consistent with the Obama administration's campaign to identify "leaks" to journalists.

Stop Watching Us is a collective of 100 public advocacy groups, among them the American Civil Liberties Union, Freedom Works, as well as individuals like Chinese artist/activist Ai Weiwei and Glenn Greenwald, the journalist who worked with Edward Snowden to expose many of the NSA's surveillance procedures. Snowden, however, is in my opinion a traitor.

Philosophically, I am in agreement with Stop Watching Us, but I have no problem with spying on others, allies and enemies alike.