Alan Caruba
There's nothing new about a deeply divided nation 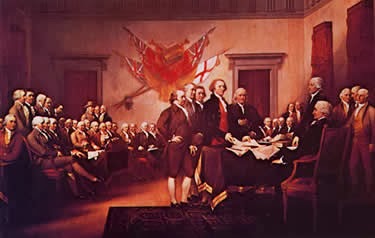 The polls and the pundits tell us that the people of the United States of America are deeply divided politically and they're right.

A bit of history helps to understand this.

The former colonies that later became the states when they accepted a federal form of government were always divided, along with their citizens, a goodly portion of whom did not want to declare independence and go to war with Great Britain. After it became clear that the Articles of Confederation were useless, a group of wealthy elites got together in Philadelphia and, in the greatest secrecy, scrapped the Articles and wrote our revered Constitution.

Fortunately, this group – now called the "framers" or "founders" – were highly educated for their time, most were successful businessmen and/or farmers. However, to call George Washington, who presided at the meeting, a farmer was an understatement. Washington owned thousands of acres and had many enterprises related to the crops he grew with the assistance of several hundred slaves. Washington was one of the wealthiest men in the nation. He and others may not have liked slavery, but there were no tractors, harvesters, or other farm equipment of later eras. Plows were still pulled by oxen or horses. If you wanted to get anywhere, you either went on foot, by horse, in a carriage, or by boat.

Washington, having led the armies of the aspiring American nation to victory over eight years, was a universally revered commander who had ultimately demanded and got complete control over the military from a generally useless continental congress that notoriously failed to pay the army.

When the Constitution has been ratified by enough states to become the new government of the new nation, there was never any question in anyone's mind as to who should be its first President. As Harlow Giles Unger, the author of a new, excellent book, "Mr. President": George Washington and the Making of the Nation's Highest Office," makes clear "...in one of the defining events in the creation of the U.S. presidency, Washington startled his countrymen by ignoring the constitution limits on presidential powers and ordering troops to crush tax protests by American citizens – much as the British government had tried, and failed, to do in the years leading up to the American Revolution." History and life is filled with ironies.

Unger makes clear an aspect of our history that is generally unknown, but based on Washington's experience with the Continental Congress during the Revolution, "from the moment he took office in the spring of 1789, Washington was obsessed with establishing the President as 'the supreme power to govern the general concerns of a confederated republic.' Fearing anarchy, disunion, and an end to American freedom if he failed to act decisively, he transformed himself – and the presidency – from a relatively impotent figurehead into America's most powerful leader, creating what modern scholars have called the 'imperial presidency.'"

Over the eight years of his two terms as the nation's first President, Washington turned the office into one that "controlled executive appointments, foreign policy, military affairs, government finances, and federal law enforcement, along with the power to legislate by presidential proclamation and to issue secret fiats under the cloak of executive privilege."

I share this with you because it is useful to know that even Washington was called a 'usurper' of power in his day when there was still a lot of fear that an American monarchy would be imposed. Despite the high regard with which Washington was held, it took the power of his personality, his high level of leadership, and his personal integrity to create the presidency that we still have to this day.

John Adams served as Washington's Vice President and observed that "The executive and the legislative powers are natural rivals; and if each has not an effectual control over the other, the weaker will ever be the lamb in the paws of the wolf. The nation which will not adopt an equilibrium of power must adopt a despotism. There is no alternative. Rivalries must be controlled or they will throw things into confusion."

After five years of Obama as President, we have seen that equilibrium swing back and forth and, indeed, this has been the history of the three branches of our government. It is now swinging away from Obama as his former support wanes and the impact of the aptly named Tea Party movement increases. The U.S. is only a year away for his powers to be blunted by a Congress that is likely to swing in the direction of conservative, Republican leadership.

As stressful as the process is for everyone, this is the way the nation was intended to be governed and the enmities that are inherent in that process are the price we pay in a nation whose population is sharply divided between those who have little knowledge of our history or of the manner in which we have emerged from many crises in the past and grown stronger.

This is not a time for despair. It is a time to harness the power of the people who hold the Constitution in high regard and to vote for those who share that regard.