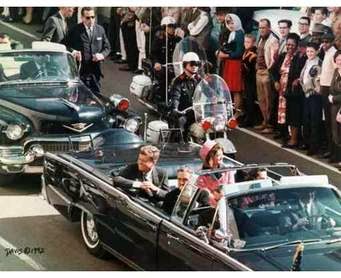 I was in the Miami, Florida office of a human relations organization when someone burst in to say that President John F. Kennedy had been shot in Dallas, Texas. The date was November 22, 1963, fifty years ago.

I was age 26, had graduated from the University of Miami, served in the Army until my discharge in 1962. My first job took me back to Miami, but at the time Kennedy was killed, my enthusiasm for it had departed and I took the occasion to let my boss know that I too was departing. I returned home to New Jersey where I would pursue a career in journalism for several years.

There are moments that mark one's progress through life. For anyone alive at the time, most can tell you where they were. The Kennedy assassination didn't just come as a shock to the nation; the world felt the loss as well. He was handsome, articulate, married to a beautiful wife, Jacqueline or Jackie as she was more often called. He had two cute children.

It was a time of considerable turmoil at home and abroad. The civil rights movement was gaining momentum. The women's rights movement began in earnest. Indeed, the entire decade left its mark on history. Just five years later in 1968 Kennedy's brother, Robert, was assassinated during his campaign to become President. Two months earlier, in April, Dr. Martin Luther King, Jr. had been assassinated in Memphis.

No one wants to live such turmoil, but the 1960s bequeathed its values to our culture – sex, drugs and rock'n roll – and our politics. Without that decade's civil rights movement, it is unlikely Americans would have elected a black President in 2008. Two generations have been born since the 1960s.

For those of us in our twenties fifty years ago, the optimism we felt with Kennedy in office was replaced with a growing sense of pessimism as the Vietnam War lingered through Johnson's administration and into Nixon's. Watergate severed most feelings of confidence in whoever was the nation's chief executive until Ronald Reagan came on the scene. I am known these days as a conservative commentator, but back then I was a Democrat and a liberal.

Countless books have been written about Kennedy's life and death. There have been films and television programs devoted to him. He wasn't in office long, serving from 1961 to 1963, but his youth, his personality, his love of the arts, and other pleasing attributes made him very different from his older predecessors.

America loves youth. It indulges the young, makes "idols" of some, and devotes most of its entertainment to them. They bring energy to the passing scene, but they are unwittingly and unknowingly the passing scene. Fifty years after the assassination is already "ancient" history to new generations.

Lost in the story of that fateful day is the fact that Kennedy was assassinated by a Communist.

That was my thought as I address the fact that fifty years have passed since JFK was killed. It is my generation who lived through the event. To think that a half-century has gone by since that day takes a moment to contemplate; to ask what I have done with my life since then. It is a question others of my generation will ask as well. In the past fifty years, with the exception of the 1980s, the nation has moved inexorably to the left.

History turns on such events. The assassination of Archduke Franz Ferdinand of Austria in 1914 triggered World War One. The assassination of JFK led to the presidency of Lyndon Baines Johnson who dragged the nation into a distant civil war in Vietnam and included a fruitless domestic "war on poverty," a liberal program that was doomed to failure in the same way Obamacare is.

As the French say, Plus les choses changent, plus elles restent les mêmes – the more things change, the more they stay the same.

In retrospect many observers have concluded that Kennedy was in many respects a conservative. He was a religious man. He opposed Communism. He increased spending to the military. He cut taxes. One can go on, but it is obvious now that he was not the liberal many would have us believe. That is a myth.

As I think back, I realize how little I knew of the politics of the years in which I was attending university, serving in the Army, or working that first job in Miami. My political education began when I was a young journalist, but my political maturity did not begin until the 1980s when Ronald Reagan served his two terms.

It was nice being young when Kennedy was President. Being old as Barack Obama, a Marxist, uses the presidency to destroy the nation, is a nightmare.