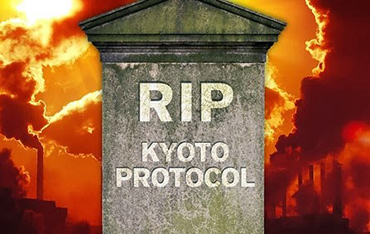 In 2007 Dr. Nils-Axel Mörner was interviewed on the subject of sea levels. He is the head of the Paleogeophysics and Geodynamics department at Stockholm University in Sweden. He is past president (1999-2003) of the INQUA Commission on Sea Level Changes and Coastal Evolution, and leader of the Maldives Sea Level Project. Dr. Mörner has been studying the sea level and its effects on coastal areas for some 35 years.

"You have Vanuatu, and also in the Pacific, north of New Zealand and Fiji – there is the island Tegua. They said they had to evacuate it, because the sea level was rising. But again, you look at the tide-gauge record: There is absolutely no signal that the sea level is rising. If anything, you could say that maybe the tide is lowering a little bit, but absolutely no rising."

The most recent edition of Bloomberg Businessweek features a cover that says "This entire country is about to be wiped out by climate change. It won't last." It is devoted to Kribati, a Pacific island chain, and it is a total lie.

The media has been a co-conspirator to the global warming hoax and I take this latest example as one that reveals its utter desperation to maintain the greatest hoax of the modern era. The facts mean nothing to them. Real science means nothing to them. But reality is intruding on theirs and the United Nations environmental program just wrapped up Conference of Parties-19 in Warsaw, where more nations are now in open revolt.

Writing from the conference was Craig Rucker, the Executive Director of the Committee for a Constructive Tomorrow (CFACT), a think tank that has helped organize the Poles to protest this travesty. "Poland has been bullied for decades and they are not about to cede their energy independence to Russia, the UN or anyone. Nor should they."

On November 21, Rucker reported that "COP-19 was shocked when China led a block of 132 nations in a walkout over 'loss and damage.' Loss and damage is a completely bogus concept that developed nations should be legally liable when natural disasters strike developing nations. There is of course no meaningful scientific or historical link that Typhoon Haiyan/Yolanda was abnormal and with no global warming link."

We owe a debt of gratitude as well to The Heartland Institute, a Chicago-based free market think tank, that has sponsored eight international conferences on global warming since 2008 and recently released a report,"Global Warming Reconsidered II." Like CFACT it has been on the forefront of those seeking to educate the public regarding the phony science claims put forth.

COP-19 was one more UN conference leading up to a new version of the Kyoto Protocol that required nations that signed onto it to reduce their so-called greenhouse gas emissions. The final push will come in 2015 in Paris.

Nations that did sign on – the U.S. Senate unanimously refused to ratify the treaty when the Protocol was initially introduced in 1997 – are realizing the economic harm that it imposed on them. The same afternoon of the China-led walkout, Poland announced that it had fired its environmental minister who is also the president of the UN conference, two days before the conference was supposed to end!

The Protocol, as is the entire global warming aka climate change hoax, is based on the lie that carbon dioxide (CO2) in the Earth's atmosphere is causing it to warm. In recent years CO2 has increased in the atmosphere and the Earth, some fifteen or more years ago, entered a cooling cycle. It is getting colder.

"Never underestimate what a gathering of bureaucrats and carbon profiteers might accomplish when after your money," warned Rucker.

A November 20 article in The Daily Caller reported that "It's worth noting that U.S. diplomats were specifically instructed by the Obama administration to oppose any attempts to create an independent fund for climate reparations from rich countries to poor countries." Three days later the administration announced that it now supports all nations declaring their targets for reducing CO2 emissions before 2015. Rucker warns that this now clears "the path for the UN to adopt a full climate treaty and successor to the Kyoto Protocol in 2015." If the Senate is not controlled by Republicans at that point, it would permit the administration to sign onto a treaty. The harm to the economy would be incalculable.

Australia's Prime Minister Tony Abbott, elected recently to undo the damage of a carbon tax, told the Washington Post "Despite a carbon tax of $37 a ton by 2020, Australia's domestic emissions were going up, not down. The carbon tax was basically socialism masquerading as environmentalism and that's why it's going to get abolished." Australia did not send a representative to COP-19. Canada dropped out of the Protocol in recent years. Japan is abandoning the UN's greenhouse gas emission reduction levels by allowing them to grow by three percent.

Nation by nation the UN global warming hoax is being abandoned for the obvious reason that it is a lie perpetrated to transfer wealth from the developed nations to those less developed. It was never about saving the Earth from a global warming; that was a lie from start to finish.

Some journalists are trying to tell the truth, but magazines like BusinessWeek and newspapers like The New York Times continue to keep the hoax alive. An informed population, not just in the United States, but increasingly worldwide, will ensure that it dies a long overdue death.