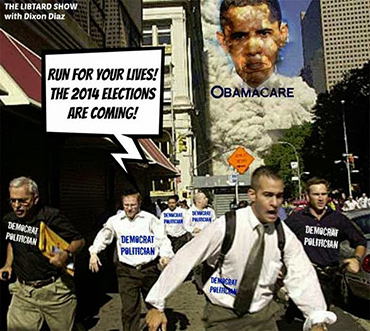 On Thanksgiving 2013, it may seem that the nation has little to be thankful for, but if you pull back from the headlines and other news, it is clear that Obama's presidency is seriously damaged and will remain so until and after he is gone. That's worth celebrating.

I must confess I am luxuriating in the knowledge of Obama's present misery. I am enjoying it as someone who predicted he would fail – and fail spectacularly – and yet I know, despite his present unhappiness, he has no idea why it is happening.

The German word for taking pleasure in another's failure or ill fortune is "schadenfreude." Since this is generally regarded as unseemly, one usually keeps it to himself, but there is no need for that in Obama's case. A small legion of conservative pundits has been warning about the consequences of Obamacare since Obama signed the Affordable Care Act into law in 2010.

The bill is so badly flawed that, even with three years to prepare for its rollout, the administration made a mess of that. Those who know more about it than I predict that it will simply implode for lack of people – mostly the young and healthy – who will not participate in the exchanges. The horror stories will begin to mount as we learn of those who lost their insurance coverage, were unable to pay huge, increased premiums, and die as a result.

In October, Daniel Henniger, a columnist for The Wall Street Journal, described it this way: "Let us try to understand what is happening now with the Obama presidency. On display to everyone watching this week is not merely the failure of a federal website or a software program or Ms. Sebelius's management skills. This is the failure of the very idea of progressive government. Not liberal government. Progressive government."

That's an important difference. Henniger is talking about communism because "progressive" is the term that has been adopted to disguise communism. In the 1950s, when I was growing up, communism was called communism because people knew the Soviet Union was communist and that it was the enemy, It is still the enemy, most particularly of freedom and, beyond that, of free market capitalism that facilitates better lives for those who live in nations that exercise it.

The problem for America has been the way it has moved to the left since the dawn of the last century, adopting all manner of "entitlement" programs, but both Social Security and Medicare will be insolvent soon unless they are reformed to reflect the changing demographics of a growing, aging population. The move to the left increased the size and scope of the federal government in ways the Founders would never have imagined or wanted.

Our present miseries are rooted in the failure of communism aka progressive government. In perfect synch with the failure of his "signature" legislation is its living embodiment, the failed presidency of Barack Obama. He is an example of those people who, despite their limited skills, continue to be hired for jobs higher up on the ladder until their failures are catastrophic.

This is now commonly called "the Peter Principle," formulated by Laurence J. Peter and Raymond Hull in a 1969 book of the same name. They postulated that the members of an organization where promotion is based on achievement, success, and merit will eventually be promoted to positions beyond their abilities; what they identified as "their level of incompetence."

It's worth noting that Obama's college records have been sealed, so we only know that he attended Occidental College from the fall of 1979 through the spring of 1981. He then transferred to Columbia University. He graduated in 1983, spent about a year in Chicago as a "community organizer" before attending Harvard Law School. There is no need to examine his "career" after that except to note that he surrounded himself with radical friends and made his way up the Chicago political ladder until becoming a junior Senator from Illinois, He served from

January 2005 until he was elected President in 2008. None of this demonstrates much preparation to be President and none of this suggests a level of competence for the job.

In 2012, a Washington Times editorial noted that "Since Mr. Obama took office, the opinion of the United States generally has declined in every country surveyed by the Pew Global Attitudes Project, according to a report released in June." Especially in Middle Eastern nations, his favorability ratings were below what they were when he took office. The Times concluded that "There's a reason Mr. Obama has not been a strong leader internationally. He never set out to be one because he never believed in the exceptional mission of the United States...He would rather bow to foreign leaders than stand up for America."

In sum, Obama has displayed a talent for campaigning for office, but has proven to lack all the attributes necessary to act effectively in office. This wouldn't be a problem if he had remained an obscure junior Senator from Illinois, but has failed to solve the problems that come with any presidency.

Fouad Adjami, a senior fellow at Stanford's Hoover Institution, recently noted that "Valerie Jarrett, the president's most trusted, probably most powerful, aide, once said in admiration that Mr. Obama has been bored his whole life. The implication was that he is above things, a man alone, and anointed. Perhaps this moment – a presidency coming apart, the incompetent social engineering of an entire healthcare system – will now claim Mr. Obama's attention."

It has taken notice of the debacle. He began by lying about it and has progressed to lying about his lies. With three years to go, we are witnessing and being victimized by the election of a man who, in the parlance of Washington, D.C., has been "failing up" his whole life. He is the ultimate example of an "empty suit."

Democrats up for election and re-election in 2014 will not want to be seen on the same stage with Obama. Those in Congress are already voting for any kind of band-aide to "fix" Obamacare, but no one is fooled by that. It can't be fixed. It can only be repealed.

I am surprised that it took this long for the voters to realize the mistake they made, but America has a Constitution that enables them to overcome such errors and the economy is robust enough to resist much of the damage he has inflicted on it. We've had presidents in the past that were not up to the job. They were replaced. The nation moved on. It will do so again.