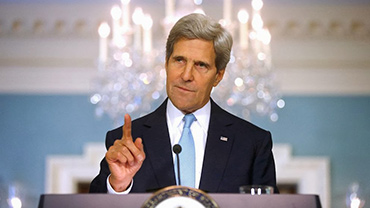 As far as Secretary of State John Kerry is concerned, the greatest threat to the Earth is "climate change." That is his view as well of the Obama administration that, according to a CNS News article, wasted $7.45 billion taxpayer dollars over the last three years "to help developing countries cope with climate change in fiscal years 2010 through 2012, according to a federal government report submitted to the United Nations." In Kerry's words, climate change is "a truly life-and-death challenge."

Since the first humans stood upright and began to walk, they have never played any role in climate change, a natural aspect of the Earth that is cyclical, moving between periods of warmth and cooling. We are currently in a 17-year-long cooling cycle which forced the army of environmental liars who claimed that "global warming" was the greatest threat to change its name to "climate change."

Another name change caused a lot of problems as well.

Since Israel declared its independence and sovereignty in 1948, it has fought a succession of wars against its Arab "neighbors" and been subjected to the claim that former occupants were "Palestinians" despite the fact that there never was and still is not a nation called Palestine. Arabs that chose to remain became citizens of Israel.

It was the Roman Emperor Hadrian who tried to change the name of Israel to Palestine. The name reappeared following World War One when the Treaty of Versailles used it to designate a swath of land south of Syria as a British mandate. In 1948, when the British left, Israel was born again after 2,000 years.

Israel joined the United Nations on May 11, 1949. Resisting the existence of Israel became an Arab cause. These days Israel maintains diplomatic relations with more than 150 nations.

Successive American administrations sought to provide an agreement between those claiming to represent Palestinians and the nation of Israel. All such efforts have all failed. At present the Palestinian Authority, based in Ramallah on the West Bank, is the focus of such efforts. Hamas, a proxy of Iran, controls Gaza, a territory abandoned by Israel in the hope that "land for peace" would succeed. It did not and Gaza is little more than a staging ground for ceaseless rocket attacks.

When Secretary Kerry arrived in Israel on January 3 to meet with PA president Mahmoud Abbas, the streets of Ramallah filled with several hundred protesters chanting "Kerry, you coward, there is no place for you in Palestine!" Abbas has never expressed any opinion other than a hope for the destruction of Israel. He replaced Yasser Arafat who waged an "intifada" against Israel as the self-appointed head of the Palestinians.

Kerry is so obsessed with getting a peace accord that he has spent five months trying to negotiate it with no progress. He has made ten trips to Israel and its Prime Minister, Benjamin Netanyahu has had to pretend, like all the former prime ministers, that an agreement is possible. After the 1967 war, Egypt decided to sign a peace treaty that secured the return of the Sinai Peninsula. These days the Egyptian military it is fighting jihadists located there.

The Palestinians are losing ground. Abbas' refusal to come to any agreement with Israel has resulted in the announcement by the European Union to discontinue its $1 billion annual contribution to the Palestinian Authority if a peace accord is not signed within a year. The US-EU aid packages total $1.5 billion and account for nearly all of the PA's regular revenue. Jordan has already made it clear it does not want Palestinians providing "security" on its West Bank border with Israel.

Yoram Ettinger, a columnist for Israel Hayom, recently wrote that "Kerry is preoccupied with pressuring Israel, notwithstanding the transformation of the Arab Spring delusion into a reality of an Arab Tsunami, highlighting the 1,400-year-old intra-Muslim and intra-Arab uncertainty, unpredictability, instability, fragmentation, violent intolerance and absence of Arab democracy and civil liberties."

Kerry wants Israel to return to its 1967 borders, reflecting Obama's goal. That is an idiotic demand that ignores Israel's need for security or the provision of housing for its growing population. Obama has criticized the building of such housing in Jerusalem and the West Bank, but few give much thought to the absurdity and arrogance of this. Imagine if Obama expressed a similar criticism of new housing in Canada or Mexico?

The only overt ally the United States has in the Middle East is Israel, but you would not know that from Kerry's efforts and Obama's barely hidden enmity. Like the effort to strike a deal with Iran to stop enriching uranium to build nuclear weapons, both are oblivious to the reality of events in the Middle East, all of which reflect a region in turmoil. Having withdrawn our troops from Iraq and preparing to leave Afghanistan, Obama's foreign policy only portends further turmoil.

The Obama administration would rather fight "climate change" than deal with the harsh realities of the real world.