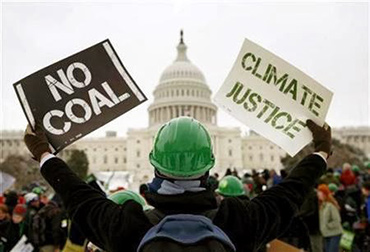 There is no reason for the U.S. to be in such a slow recovery from the financial crisis of 2008. If President Obama would get out of the way, our national debt could be dramatically reduced and hundreds of thousands of jobs would be created in the nation's energy sector, leading to the expansion of its manufacturing sector and still more jobs.

As Daniel Simmons, the Director of Regulatory and State Affairs for the Institute of Energy Research told the House Oversight and Government Reform Subcommittee on Energy Policy, Healthcare and Entitlements in February 2013:

As 2014 began, Mark D. Green, editor and lead contributor to Energy Tomorrow, a project of the American Petroleum Institute, noted that "Oil and natural gas are the energies of our lives." They heat and cool our homes and apartment dwellings. They fuel our vehicles and aircraft. They are components of products we use every day. "Every day 143 U.S. refineries convert an average of 15 million barrels of crude oil for these uses and more."

Green also noted the important role the energy industries play in our economy, citing the "5.6 percent (5.6%) of total U.S. employment. "With the right policies in place – pro-development policies that increase access to domestic reserves – the industry could add another 1.4 million jobs by 2030."

Jobs for younger workers would increase because 50 percent (50%) of the oil and natural gas industry's skilled workers could be retiring within a decade. Pro-development policies would fuel a renaissance in manufacturing as lower energy prices would reduce out-sourcing and attract manufacturers to build and expand facilities in the U.S.

One factor stands in the way of this brighter economic future and that is President Obama and those who direct the work of the Environmental Protection Agency – an enemy of the coal industry – and the Department of the Interior which has slowed the provision of leases to energy companies to expand the discovery and extraction of energy resources.

Instead, Obama has delayed the construction of Canada's Keystone XL pipeline, a project that would generate jobs to build it and jobs resulting from it. Green says that "As unimaginable as it might have been just five years ago, the right policy decisions could see the U.S. meet 100 percent (100%) of its liquid fuel needs domestically or from Canada by 2014."

Energy industries already send $85 million a day to the U.S. Treasury in income taxes, royalty payments, and other fees. Obama, though, wants to raise the nation's borrowing limits after having added six trillion dollars in debt in his first term.

It was Obama who wasted a trillion dollars on a failed "stimulus," discovering belatedly that there were few "shovel-ready" jobs while at the same time wasting billions in loans to wind and solar companies that went into bankruptcy shortly after receiving them.

As Simmons points out, "In 2011, wind power produced 1.2 percent (1.2%) of the energy used in the United States, solar power produce 0.1 percent (0.1%) and hydroelectric power contributed 3.3 percent (3.3%) of the total energy used. Solar and wind energy is unpredictable and require back-up from traditional electrical energy plants. "Today, there are 104 nuclear reactors in the United States and construction began for all of these reactors prior to 1974."

Thanks to the EPA 153 coal-fired plants have been shut down!

What the public is not told is that the coal-fueled electric sector has invested $110 billion in a variety of clean coal technologies that reduced emissions by 90% and intends, over the next decade, to spend $100 billion more. Even so, the EPA continues to issue rules – New Source Performance Standard – that make operating coal-fired plants too costly to operate.

The Obama administration's justification for its policies is the bogus claim that carbon dioxide (CO2) is responsible for "global warming" or "climate change" when it plays NO role whatever regarding the Earth's climate.

The same lies the Obama and Democrats in Congress, as well as the Health and Human Services department told Americans about the Affordable Health Act are reflected in their lies about the nation's energy sector.

Obama has been waging a war on America's energy needs and the benefits that would result from its expansion.

Until Obama leaves office and voters remove the opponents of the nation's energy sector, the enormous benefits to Americans in jobs and debt reduction will not occur.