Alan Caruba
I am afraid of my government 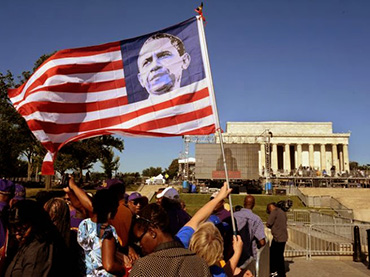 I came into this world when Franklin D. Roosevelt was President and I have never been afraid of my government until now.

I am not alone. A consistent and growing theme of commentaries on the conservative news sites and blogs that I read every day is the fear of the Obama administration that has been cracking down on those who criticize it. They get audited by the IRS. They are refused the same status as non-profit entitles engaging in public education as Left-leaning organizations. They are accused of being racist, homophobic, anti-immigration, and anti-women.

This goes beyond the ordinary disagreements between individuals and groups that express opposition to the Obama administration. It has the look of a deliberate campaign and we have three more years of Obama as President in which to endure it.

In a speech to the leftist nonprofit Center for American Progress, Sen. Chuck Schumer, (D-BY) recently urged the IRS to "redouble" its intimidation tactics against the Tea Party. He represents a state whose governor recently said that conservatives were not welcome to live and do business. Its largest city, New York, just elected a Marxist as its mayor.

Jim Lakely, the director of communications of The Heartland Institute, a free market think tank that has led the effort to debunk the global warming hoax, recently posted a commentary "The Unceasing Political Thuggery of Obama's Gangster Government." He noted Michael Barone's description of the Obama administration as a "gangster government."

Lakely cited the growing list of actions taken against those who have expressed criticism. It includes Dinesh D'Souza who produced a documentary about Obama's life, "Obama's America" and who was arrested on felony charges for violating campaign finance law. "This is beyond absurd – especially in light of what the FBI and IRS have found not worthy of any investigation, let alone indictment" in the past. A Hollywood group of conservatives, the only one there, received an IRS demand for its complete donor list; this is a repeat of similar demands of Tea Party groups seeking non-profit status. James O'Keefe, whose Project Veritas exposed the nonprofit status of the leftist ACORN, is being audited as was Frank VanderSloot, a big Republican donor, as was conservative journalist Wayne Allen Root – twice. The list keeps growing.

The Heartland Institute was subjected to the stealing of its confidential budget and planning documents by global warming activist Peter Gleick "for the purpose of harassing" its donors, but no action has been taken against him by law enforcement authorities.

"Never in the history of this country have we seen such a broad and coordinated abuse of the government's power to threaten criminal prosecution and ruin the lives and livelihoods of people the President and his party see as political 'enemies,'" says Lakely.

"This should be the political scandal of the century – if only we had an honorable and competent MSM (mainstream media) press corps in this country."

Ordinary Americans have cause to share my fear as they discover the wreckage that Obamacare is inflicting on our healthcare system, losing their insurance plans, and now we are hearing that the insurance industry may have to be bailed out as it is subjected to major losses. The government's website is not only a disaster, but it subjects anyone using it to the threat of identity theft as experts testify it can be hacked with ease.

The economy of a nation with enormous energy reserves, enough to make us energy sufficient for decades, is being undermined by a deliberate campaign to shut down coal-fired plants and make the construction of new ones impossible. The Keystone XL pipeline from Canada has been delayed for five years despite the jobs it represents and access to oil at the same time the government has slowed the provision of leases to oil companies seeking to explore and extract our own reserves.

And millions of Americans are out of work or have ceased looking for work as the result of the worst economic "recovery" in the history of the nation. This is occurring at a time when the Obama administration has added $6 trillion to the nation's debt, causing a leading credit agency to downgrade the nation's credit rating for the first time in its history.

The scandals attributed to the Obama administration keep mounting from "Fast and Furious" that transmitted weapons to Mexican drug cartels, to the failure to provide security to our Libyan consulate despite many requests, leading to the Benghazi killing of a U.S. ambassador and three brave security personnel who went to his aid. The list keeps growing.

There is ample reason for Americans to fear their government these days, and the mood of the nation is growing worse as they realize that they have a President who lies all the time and pursues "climate change" policies that have no basis in known science and a campaign of class war based on "income inequality" as the incomes of Middle-Class Americans have suffered a decline. The solution to income inequality has always been an increase in the national economy.

The nation's military is being undermined by budget cuts and policies that encourage open homosexual participation and the introduction of women into its combat forces. A growing list of generals and admirals have been forced to retire.

It has taken only five years to bring the nation to this point, and none of the scandals has resulted in anyone in the Obama administration being held accountable.

When we can no longer depend on the Department of Justice, the Internal Revenue Service, and other elements of the government to act lawfully, we as a nation – a nation of laws – are all in jeopardy.

For these and other reasons, I and many Americans are growing fearful. We have good reason.