Alan Caruba
The world's volcanic past and future 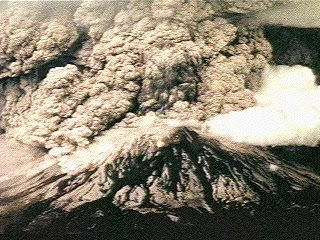 While Americans coped with massive snowfalls in the South, Midwest and Northeast, a dramatic volcanic eruption occurred on February 13th in Indonesia when Mount Kelud in the province of East Java erupted so loudly it could be heard 120 miles away.

It is one of 130 volcanos in the world's fourth most populous nation, located on the "ring of fire" volcanic belt around the shores of the Pacific Ocean. About 200,000 people were affected and more than 76,000 had to be evacuated according to Indonesia's National Disaster Mitigation Agency. The affect was dramatic, shutting down an airport in Indonesia's second largest city, Surabaya, a major industrial center, along with those in five other cities as well as a major oil refinery that provides more than a third of Indonesia's total output of refined products.

Earlier this month, the eruption of Mount Sinabung in the north of the island of Sumatra was credited with the death of eleven people. It had been spewing lava and ash for months and forced thousands to flee the area.

There are about 1,500 active volcanos worldwide with the majority on the Pacific "ring of fire." Some fifty of these erupt every year, An estimated 500 million people worldwide live near active volcanoes.

While environmentalists are forever blathering about carbon dioxide (C02) emissions from cars, plants that produce electricity, and all forms of manufacturing, volcanos produce from 145 million to 255 million short tons of CO2 every year.

Large, explosive eruptions, in addition to CO2, put large amounts of water vapor, sulfur dioxide, hydrogen chloride, hydrogen fluoride, and ash, pulverized rock and pumice, into the stratosphere to heights of 10 to 20 miles above the Earth's surface. Sulfur dioxide and sulfuric acid condense rapidly in the stratosphere to form fine sulfate aerosols that reflect the Sun's radiation, cooling the Earth's lower atmosphere or troposphere while also absorbing heat radiated from the Earth. In the past century, several eruptions during the past century cooled the Earth by up to half a degree Fahrenheit for periods of one to three years.

I cite this to drive home the fundamental scientific fact that, as opposed to all the nonsense about human control or effect on the Earth's temperatures, volcanoes by comparison render the human component infinitesimal.

Moreover, CO2 plays virtually no role in the Earth's overall temperature. Shutting down coal-fired electrical plants and preventing the construction of new ones has no basis in science. The outcry against CO2 ignores the fact that all life on Earth depends on it to provide the "food" that all vegetation requires. More Co2, not less, is good for the Earth.

What Americans need to worry about is the eruption of a super volcano with a large caldera such as the Yellowstone Caldera in Yellowstone National Park and the Valles Caldera in New Mexico. Both have been dormant for thousands of years.

The Earth has been around for 4.5 billion years compared to its human component that only began to create what we call modern civilization for about five thousand years. Its volcanos, potential earthquakes, floods, blizzards, and other natural hazards pose some serious threats. Massive eruptions such as those about 250 million years ago are believed to have been the cause of the "Great Dying" that is estimated to have killed 90% of the species existing at the time.

When I read and hear about people speaking about how humans are causing major species declines or industry threatening the climate, I am reminded of how Nature, the action or inaction of the Sun, volcanoes and other natural events dwarf anything that is attributed to human activity.

Thanks to the environmentalists, we are crippling and denying the ability of this nation to construct the pipelines, expand our industrial base, and provide the housing needed for an expanding population.

Look around you. Pretend you're a dinosaur Then remember they dominated the Earth for thousands of years until Nature eliminated them.