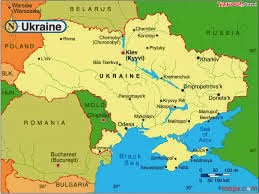 Photos of Vladimir Putin, Russia's president, often show him shirtless, riding a horse, shooting, catching large fish, and close to wild animals. It is the kind of public relations intended to emphasize his manliness and strength.

Putin has made it clear over the years that he wants to restore the size and influence of the former Soviet Union, but the Soviet Union collapsed in 1991, in part from the four decades of isolation of the Cold War and in part because Communism doesn't work no matter how large or small a nation may be.

Just ask the Venezuelans who want to overthrow their government or the Ukrainians who forced out their president, Viktor Yanukovych, after he tried to thwart a greater engagement with the European Union.

Putting Russian troops into the Republic of Crimea while claiming that they are there to protect the human rights of Ukrainians in the eastern sector will prove to be a major blunder. Call it Putin's folly.

History is often shaped by the errors made by various leaders. The former head of the Soviet Union's NKVD is long accustomed to using coercion and Communism depends on it to maintain its power. The move into Ukraine reflects the preference to threaten this and other former satellite nations, but we are now in different times. Putin is about to learn that.

President Obama's lack of a coherent foreign policy and his desire to have better relations with Russia has been widely criticized, but so far as the Ukraine is concerned, he has acted wisely.

At an emergency meeting of the U.N. Security Council on Monday, the U.S. ambassador, Samantha Power, spelled out Putin's errors of judgment for everyone to hear, accusing Russia of an act of aggression.

"Russia has every right to wish events had turned out differently," she said of the events in Ukraine, but "It doesn't have the right to express that using military force." President Obama backed that up, warning of potential diplomatic and economic "isolation."

In blunt terms, Powers said "So many of the assertions made this afternoon by the Russian Federation are without basis in reality."

Powers enumerated the events, noting that Russian military forces had taken over Ukrainian border posts, taken over the ferry terminal in Kerch, and that its ships were moving in and around Sevastapol. In addition, Russia was blocking telephone services in some areas. "It is a fact that Russia has surrounded or taken over practically all Ukrainian military facilities in Crimea" in addition to having had its jets enter Ukrainian airspace."

"Russian military action is not a human rights protection mission. It is a violation of international law and a violation of the sovereignty and territorial integrity of the independent nation of Ukraine, and a breach of Russia's Helsinki Commitments and its U.N. obligations." All true.

Powers, speaking for the U.S., said that "There is a way out. And that is through direct and immediate dialogue by Russia with the government of Ukraine, the immediate pull-back of Russia's military forces, the restoration of Ukraine's territorial integrity, and the urgent deployment of observers and human rights monitors, not through more threats and more distortions."

Putin's show of strength will backfire because neither the U.S., nor the European Union, or any other nation wants to see a revived Soviet Union in the form of an over-aggressive Russian Federation.

President Obama announced an aid package to bolster the Ukrainian government, including $1 billion in loan guarantees to offset any loss of energy subsidies from Russia. The U.S. is also planning to provide technical support for Ukraine's financial institutions, training for election observers and assistance in anti-corruption efforts. One of the reasons Ukrainians drove out Yanukovych was the corruption he represented and his preference for Russian influence in the Ukraine.

Coming off the global attention generated by the Winter Olympics, Putin may have calculated that he had to back Yanukovych and, after he fled Kiev and the Ukraine, concluded that only a show of military power would restore respect for the Russian Federation. He was wrong. Nations get respect for not invading their neighbors and for participating in the global economy.

In many ways, in today's world there are options to pressure Russia with regard to its need to sell its natural gas and oil assets, and conduct trade with other nations. Putin has underestimated these options.

At some point he will withdraw his military – whose uniforms do not show any identification of origin – and will declare that Russia will respect the outcome of the Ukrainian elections in May. He has no choice. The Cold War is over, but it never really ended as far as Putin is concerned.

While President Obama has received a torrent of criticism for his foreign affairs policies, much of it well earned, his restraint is the best way to address the Russian invasion and the U.S. mobilization of resistance to it is the wisest course of action.

Nobody wants World War III and that includes Vladimir Putin.