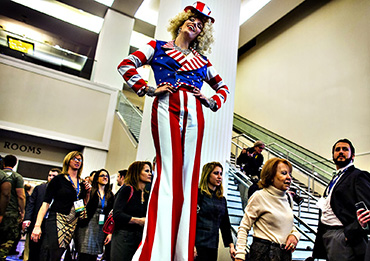 The Conservative Political Action Conference (CPAC) is over after three days of speakers and seminars. It drew a huge crowd of mostly younger voters, many drawn from the Young Republicans for Freedom who, in 1973, teamed with the American Conservative Union for the first conference. Over the years roughly half of those attending have been of college age.

The crowd this year was so large, estimated to be between 10,000 and 11,000, that no hotel in Washington, D.C. was able host the event. It was held at the National Harbor convention center just outside of the capitol.

What was most impressive was the fact that every major player in the Republican Party and representing a leadership role in conservative affairs, was there.

Does the straw vote represent anything significant? I doubt it. The Paul's, Libertarians, reflect the younger voter's idealism, but neither represents a presidential prospect. Most likely one of the governors will emerge as the Republican Party nominee to run for President.

The two who have the best shot are Chris Christie and Texas's Rick Perry. Perry did not do well in the 2012 GOP primaries, but we later learned he had had back surgery and was in a fair degree of pain during the debates.

Christie is already moving passed the "Bridgegate" problem though you wouldn't know that if you tuned into MSNBC at any hour. They have devoted themselves to making it into a big issue in order to defeat any chance he might have, but have succeeded only in making themselves look more stupid than usual. Christie has lost some of the momentum he had after he won a second term for Governor in a blue State.

Along with Perry, Christie was very well received at the CPAC convention. The fact is that the GOP has a deep bench of governors that include Nikki Haley, Rick Scott, Scott Walker and Bobby Jindal which tells you how well Republicans have done as governors nationwide. There are 29 of them at last count.

Ted Cruz (R-TX) who burst on the national scene with his filibuster about Obamacare is a powerful orator. He has managed to generate opposition from the Republican establishment in D.C., but so has the Tea Party. We can count on him and others to be heard from in the years ahead.

No doubt the high level of enthusiasm and confidence at the CPAC convention reflects the utter disaster that the Democratic Party inflicted upon itself by passing the Affordable Care Act, aka Obamacare. When you add in the way Obama has looked weak, first with Syria and now with the Russian invasion of the Crimea, Obama is fast losing his once great messianic appeal. His own party is disinclined to give him mindless support these days.

Obama is already being compared with former President Jimmy Carter and history will likely judge him as the worst President this nation has ever had to endure. Few, if any, Democrats running in the forthcoming November midterm elections will even want to be seen on the same platform with him. All he does these days is fund raise, play golf, and take vacations.

So, if the CPAC straw vote provides little indication of who will be the GOP candidate in the 2016 election, the response to both Christie and Perry provides a signal of what direction the party may take. Another good indication will be the way the mainstream media goes after whoever it thinks might be the GOP selection. It is little more than an arm of the Democratic Party.

Much has already been written of the "divisions" within the GOP as a strong conservative debate ensues among the candidates who, in truth, all know that Obamacare will be a deciding factor in the midterms and thereafter. I anticipate a Democratic Party bloodbath and so do they.

Americans want Obamacare repealed and, if the GOP gains control of the Senate and increases its hold on the House this year, you can count on a vote to do that. Obama will veto it but he could be over-ridden. That would be historic.

It is, however, way too soon to be making any predictions. All manner of events could intervene and alter the political scene. For now, though, I am inclined to think that Gov. Perry has a good chance of emerging as the presidential nominee in 2016. It would not surprise me if Hillary Clinton decided she's too old and too tired to put herself through a long campaign. After all, a virtual unknown named Barack Obama defeated her in 2008 when she did that the last time.

For now, I am greatly encouraged by the turnout at the CPAC convention. The future belongs to the generation that attended. They and their parents, and just about everyone else have been screwed by Obamacare and know it.